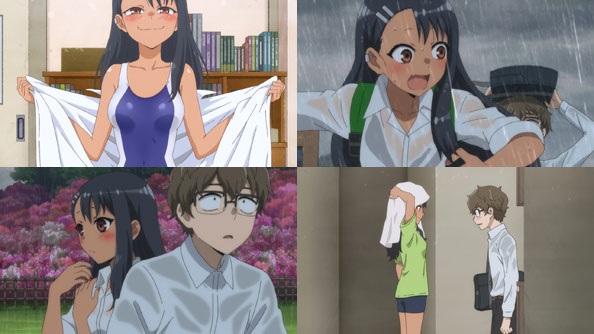 Nagatoro continues her daily intrusions on Naoto’s drawing sessions, but it’s clear it’s not out of malice. She slips off her skirt and top to reveal her school swimsuit for the sheer thrill of it, and to get her fix of that sweet, sweet Naoto fluster. This cold open is nothing new, but when the two are caught in the rain it begins the trend this episode of Nagatoro acting more like Naoto’s friend (and even admirer) and less like his tormentor.

When they find some temporary shelter, Nagatoro plays herself once more by warning Senpai not to look at her as her soaked uniform is see-through. He assumes she’s still wearing the swimsuit underneath, and takes a good long glance at her. You can watch Nagatoro shift from a neutral expression, to a bashful one, and finally to her mischievous one. But when the rain fails to let up, the teasing stops and she suggests they dry off at the nearest house—which is hers.

Once there, it’s Naoto who makes an unforced error by smelling the towel Nagatoro provides, in case she used it first. From there, it’s a pretty standard house visit, or it would be, if it weren’t the very first time Naoto was in a girl’s room. As for Nagatoro, she clearly couldn’t be happier to finally have Naoto firmly ensconced in her lair…so they can play her brother’s video games together!

At first, Naoto kicks Nagatoro’s ass and she is not gracious in defeat. Thinking this could be a way to exact revenge, Naoto presses his attacks, but Nagatoro starts using various forms of physical contact to distract him so she can win. After some tense back-and-forth, the two eventually settle in to having fun together, not worrying about teasing or being teased. Nagatoro seems genuinely touched when Naoto says he had fun before leaving for the day. 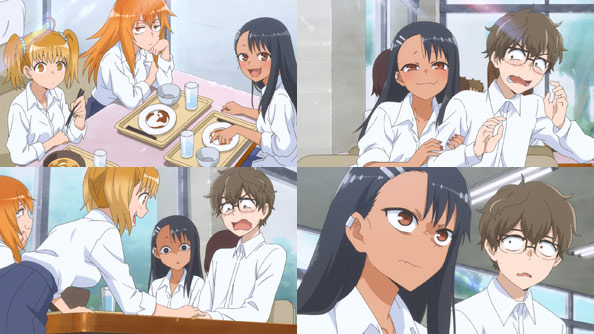 Of course, the teasing will never be fully over for Naoto, it will come down to how he chooses to react to it, or whether he ever tells her to flat-out knock if off (which will be never). When he braves the packed cafeteria for lunch, who should have an empty seat next to her but Nagatoro, who uses it to present her new…er…senpai to her two friends Gamo and Yosshi.

Naoto fully expects a three-on-one teasing assault, but both he and Nagatoro’s friends are surprised by how she reacts to them teasing him. While she’s all over him saying he’s her boyfriend/pet/slave, she does not take kindly to Yosshi trying to touch him—giving us the first look at Nagatoro’s “Possessive Face”. Gamo-chan picks up on this and calls Naoto a “bug”, which crosses a line for Nagatoro.

Naoto is shocked to find her getting angry for his sake! This motivates him to stand up for himself and loudly declare that Nagatoro isn’t his girlfriend. The thing is, Nagatoro looks miffed and even a little hurt that he denied it quite so strongly and publicly.

It’s clear from their encounter with Gamo and Yosshi that Nagatoro would much prefer to have her beloved Senpai all to herself. I mean, her demeanor at the restaurant with the other guys compared to her pure unbridled joy hanging out with him at home was as different as night and day. To this end, she attempts to get Nagatoro to fight back…not against her teasing, but the teasing of others.

She suggests the best way to do this is to smack the taunts down with a hearty slap to the shoulder. Nagatoro decides to do a couple of dry runs. The first time he slaps her, she’s surprised by the force and passion he put into it. She in turn cranks up the verbal abuse until once again Naoto is fighting back tears. This time, when he says she doesn’t have to “take it so far”, Nagatoro clearly regrets doing so and apologizes.

Then she changes gears by insisting he give her the shut-down smack, but he’s a little too forceful this time, and his arm ends up smacking against her chest. So he definitely has some work to do . But the bottom line is, even if she’d prefer to tease him at her leisure, she wants him to fight back against others. To her, there’s a clear distinction between their particular “thing” they have, and everyone else.