Momonga’s starts to fulfill his desire for the name Ainz Ooal Gown to become known far and wide throughout the world starts out modestly, by entering E-Rantel posing as a young adventurer “Momon”, accompanied by one of his battle maid Narbarel AKA “Nabe”. He knows that he can’t conquer a world he knows next to nothing about, and a great way to learn more is to play things by the book and rise in the ranks of the adventurer guilds.

Momonga is making a conscious effort to do things carefully and empirically, not making to much noise. Yet his potential to be a bull in the proverbial china shop is evident when he tosses a would-be bully across a tavern, knocking over another adventurer’s precious potion. He gives her one of his to make things right, but his potions are red, not the usual blue, so she takes it to the local pharmacist, Nphirea, who then learns about Momon and is intrigued.

By then Momon, needing coin but unable to secure high-level jobs, agrees to join an adventuring party, Swords of Darkness. Nphirea seeks out Momon, and both he and the Swords agree to accompany him as his bodyguards on an herb-collecting excursion. Even after annihilating an entire Slane army, Momon remains cautious and is hesitant both to guard Nphirea alone at his present state of knowledge of the new world, and also just plain doesn’t want to go back on his word to join the Swords of Darkness, instead including them.

Throughout all of this, Nabe remains dutifully by Momon’s side, voicing her displeasure with having to jump through hoops for human trash (though I understand why he didn’t bring Albedo along; she’s more powerful than the battle maid and hence hates being around humans even more than Nabe). There is something to both Momon and Nabe having to restrain themselves in order to fit in and get the knowledge and experience he wants out of this.

Meanwhile, the next antagonist in Momon’s adventure reveals herself to the audience with lots of helpful expository dialogue with another baddie. They’re members of the secret society of Zuranon, and she, Clementine, has secured a magical item that consumes the one who uses it. She’s heard about Nphirea in E-Rantel, and wants to use it on him, gaining the help of Khaj.

I’m looking forward to seeing where this goes, and the inevitable showdown between Momon/Nabe/Swords of Darkness and these would-be spreaders of chaos and death. But the long and short of it is, we didn’t get to see any of that in this episode; it was largely setup, albeit with some decent world-building.

Everything about the mages the Slane Theocracy sends to Carne, led by Nigun Grid Lewin of the Sunlit Scripture, indicates they’re tough customers by any measure, and there’s no better way of demonstrating that than by methodically beating down Re-Estize’s head warrior Stronoff with wave after wave of summoned Escaflowne-style mecha-angels.

Stronoff has offensive magic and is able to carve through a few dozen, but they just keep coming, and his soldiers aren’t strong enough to help him. On the edge of defeat and death, Lord Momonga—sorry, Ainz Ooal Gown—uses the item he gave Stronoff to switch places with him, with Stronoff ending up in the villager’s shelter and Ainz and Albedo facing off against a huge and confident Slane force.

Lewin and his forces look strong and they feel strong, and they definitely did a number on Stronoff. But as great and famed a warrior as he is, Stronoff is still only a human, and so are they. And the strength and magic of humans turn out to be of no consequence to Ainz and Albedo. He entered the battle prepared for a tough fight, but he turned out to be overly cautious. But that’s okay, because I expected them to put up a fight too.

Which is why it’s so strange that I don’t feel cheated in the slightest by the fact Luwin and the Slane mages are nothing but ants before the power of Ainz. After watching them have their way with Stronoff, watching Ainz utterly turn the tables by defeating every weapon at their disposal with comical ease was a lot of fun. I keep using that word because that’s what this show is: loads of badass, giddy, contagious fun.

Even Albedo (who granted is infatuated with Ainz) can’t restrain her glee at the spectacle she witnessed, setting aside her objections about him even bothering to face such puny opponents and reveling in his awesomeness, along with the way he used Stronoff as a pawn to collect more information on the strength of the local powers, which he’s determined is pretty pathetic.

Back home at Nazarick, Ainz declares his new name and orders the assembled guardians to make sure it becomes an eternal legend that spreads across the world. That, Inner Ainz believes, is the best way (not to mention the most entertaining way) for him to attract the attention of other human players from Yggdrasil. If they made the trip with him to this new fantasy world, he intends to find them.

From his magic mirror in the Tomb of Nazarick, Momonga is able to watch a group of knights sack a village, brutally slaughtering men, women, and children with impunity, and he realizes something: it’s not really bothering him. The sight of such real violence would have made him sick in the world he came from, but here he finds himself unusually hardened. Instead of watching the pillaging with outrage or disgust, he sees it as an opportunity both to test his abilities and gather information.

But he also wishes to repay a debt to “Touch Me”, another player who once saved him from a band of enemies because “it was common sense”. Do unto others, and all that. Momonga didn’t even have to ask, and neither to the villagers of Carne, as Momonga practices various magics while saving a couple of little kids from their doom, for which they’re grateful, if a bit freaked out by his scary looks. 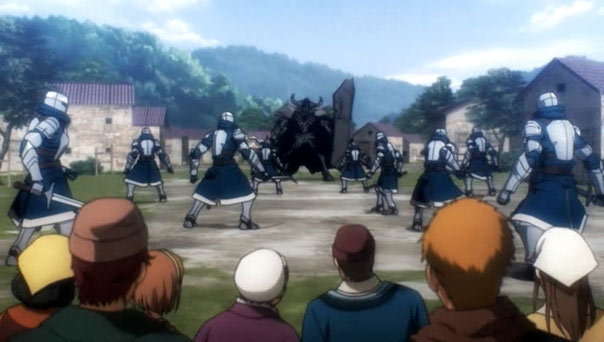 It’s immensely fun to watch as he uses lower-level spells to smite the murderous knights, and a slightly higher-level one to reanimate one of their dead into a giant, virtually invincible zombie warrior. Even if he’s a stranger in a strange land figuring things out, he has the advantage of being one of the most powerful beings in that land, at least compared to the people he’s encountered.

Other than Sebas in the cold open, the fully-armored Albedo is the only one of Momonga’s guardians who appears this week, and while it seems like she’d rather smash all the lowly pathetic humans into jelly, she stays her hand and obeys every order her beloved issues.

It’s great that not only are we following extremely powerful, elite beings in relation to their world, but they might not even be the good guys. Only Momonga, who is, at least in his thoughts, still human, even bothered visiting this village, dragging Albedo along more for procedure/precaution than necessity. 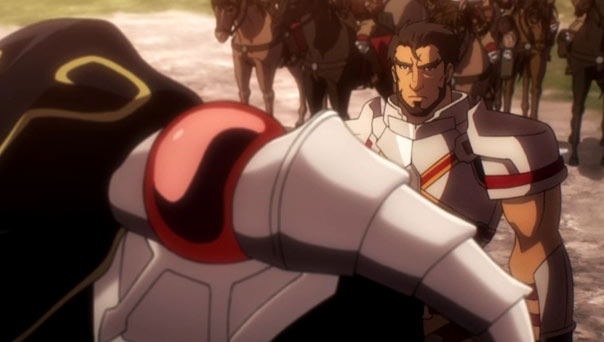 Touch Me’s words about rescuing the weak being common sense ring true, as Monomga, AKA Ainz Ooal Gown, collects some useful info about some of the geography and politics of the world he finds himself in. But he also reflects an empathy for humanity his beastlike guardians lack; reflected in the Chief Warrior of the Kingdom of Re-estize, Gazef Stronoff, who came from a village much like Carne Village, always wished for help to come when trouble struck.

Help never came for him, but now he works to make sure other villagers aren’t subjected to the same disappointment and neglect. The strong have a duty to protect the weak. Momonga just happened to beat him to it in Carne. And as Stronoff arrives, ahead of another wave of potential enemy knights, Momonga may end up in deeper than he wanted at this juncture, but with all the tools he needs to prevail.