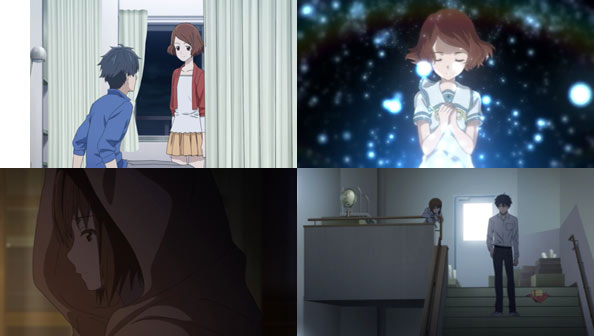 After seeing the monster, and being told the monster is a monster by Dream Haruki, Kei wakes up…and that’s it for the monster this week. After a new, jauntier OP with a latin-inspired beat (replacing the old whispery one), the story jumps from place to place and opaque, metaphor-laded conversation to conversation seemingly involving everything and anything but the monster.

Kei talks with the revived Sumire about how he’s happy in the current situation (what with her being alive), but due mostly to his retained memories of the process by which she returned, it still doesn’t feel real to him, and he doesn’t see how he can stay living in that kind of world forever. Sumire reads it as a kind of rejection. 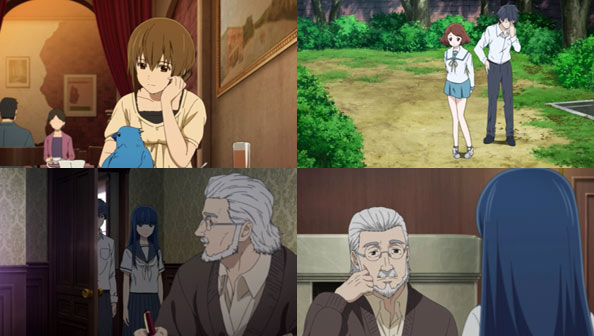 There’s also precious little Michiru in this episode, as Sumire visits her in the dream world and talks about things she’s not that interested in, and which Chiruchiru (in blue bird form) warns Sumire not to bring up around her. Chiru wants to protect Michiru by not upsetting her with things like the fact there’s a way to save her from her present state.

Rather than Michiru or the monster, Kei, Haruki, and Nonoo investigate the “Stray Cat House Man” (SCHM) who, the way he’s described, is nothing less than one of the most powerful beings in the world, as his ability is to write “The Script”, which governs all people, things and events in the world, even resets and predictions of the future.

He’s even ahead of the Witch or Sumire in that their ability is governed by his. There’s also the fact he’s more of a humble vessel for the ability than an arrogant braggart; after all, the pen in his hand moves on its own, filling books. His physical body has deteriorated to the point he can no longer write, so starting with Book No. 852, he’s worked in the dream world exclusively.

Nonoo remembers him (and he her) from their interactions about five years ago, when she was the only visitor to his house, and whom he tried in his own small way to guide her on how to exist, live, and be happy in the world. In the present she tells him he “saved” her, because now she has people like Kei and Haruki she can call friends.

Kei goes through the manuscripts for The Script, but can find nothing before No. 852, while Sumire instructed him to find and carefully read No. 407. That, and all manuscripts before SCHM entered the dream world, are in the possession of the Bureau, members of which arrive to basically cordially kick Kei out of the SCHM’s house.

Once Kei leaves, the leader of the Bureau members there isn’t coy about his true feelings about Kei: he thinks his ability is a nuisance, especially when used in concert with Haruki or others, and he’s generally an eyesore he’d like to “snuff out” if necessary. Who knows what that entails (he joked about stabbing him in the heart, but was that just a joke), but it’s clear this cour has a more reliable villain than Oka Eri.

Like many earlier episodes of the first cour and a few there in the middle, I only really understood a little more than half of everything that was said and done, but as I refuse to let my enjoyment of this deeply intriguing and offbeat show be governed by my level of understanding, that’s not really of great concern.

Still, moments like Kei calmly pointing out to Haruki and Nonoo that they should pay more attention to the fact they’re wearing skirts while crawling through a drain to get into the SCHM’s house, or Sumire’s apparent displeasure with how things are with Kei (hinted at in the new ED as well), are easier to understand and appreciated.

With all the different players and agendas in play, combined with the new dream world setting, Sagrada Reset is poised to have an even more ambitious, and possibly more baffling, second cour. I’ll be here to attempt to make some kind of sense of it.