I kinda needed a week away from Dagashi Kashi, so last week’s hiatus was well-timed, allowing me to build back up a hankering for some fresh candy-cation. This week’s loose theme was “playing with your food”; specifically candies that you’re meant to play with before you consume them.

Hotaru brings the others to a shrine where she does a dance to the god of candy with a super-long gummi string, then breaking out a “Maken gummie” which comes in the form of a hand making one of the three rock-paper-scissors gestures. Tou learns another use for it is flipping a girl’s skirt, enabling Kokonotsu an unsolicited look under Saya’s, much to both their embarrasment. Saya promptly posterizes her brother. 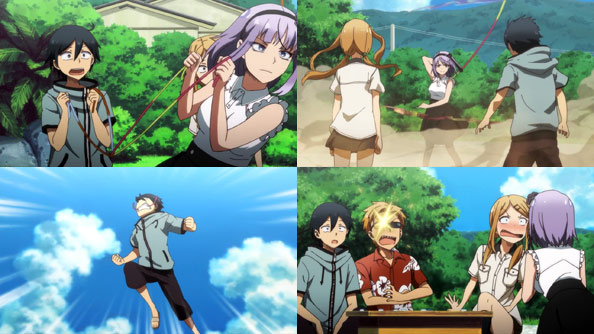 Hotaru tries to use the gummie string in a surprise competition that will determine if Koko inherits his dad’s store, but it fails, like most of her attempts to get him to commit to doing so. However, Koko inadvertently proves he was born to own a candy shop when she accidentally loses her grip on her gummie “nunchaku”, and without thinking he leaps into the air to catch the errant candy in hismouth before it touches the ground.

When Hotaru breaks out the ohajiki, Saya is naturally good at it without knowing the rules. Hotaru has noticed Saya is good at a lot of things she sucks at, and starts to think Saya would be a perfect fit working at Koko’s candy shop. She suggests as much to Saya, unaware of how much Saya likes Koko, and while Saya doesn’t give an answer, the thought of being that little bit closer to Koko lingers in her mind.

That takes us to the episode’s strongest and most heartwarming segment, a flashback to when Saya and Koko were still in elementary school, and she’d come by all the time to play.

Back then, Koko was as enthusiastic about candy as Hotaru is in the present, and acts as a spokesman for combination candy and “nutritional good” Yoguret, a melt-in-your-mouth dairy candy that comes in blister packs like medicine, making it perfect for if, say, they were to play Doctor.

That was only an example, but Saya, who liked Koko as much back then as she does in the present, runs with it. But Koko makes her the doctor, and when she insists they switch, he always manages to get out of “examining” (read: touching) her by prescribing her the Yogurets as medicine. While comforting him when they’re all gone, the two stumble to the floor, holding hands and lying quite close.

It’s perhaps the first time in their lives they were quite that close to each other, and noticed each other as girl and boy. Cut to the present day Saya, all grown up, wondering why that particular memory suddenly surfaced, but sure that Koko probably forgot about it.

When she arrives at Koko’s shop, Hotaru announces the featured candy of the day is – yup – Yogurets. Both Saya and Koko instantly blush, and Saya retreats, but she’s clearly happy Koko remembered after all. Such is the power of candy.

This episode clinched for me what I’d always suspected: Saya is the true star of this show, and the reason I’m still tuning in. Hotaru has her moments, but she’s a mostly static, cavorting jester, while Saya is a warm, vulnerable human being with whom we can empathize. 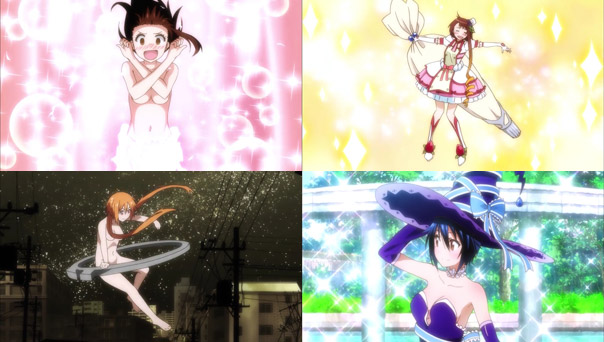 Whew, talk about a grab bag. Not only is this week split into two completely different stories, but the first half doesn’t even take place in Nisekoi’s world. Instead, it tries its hand at the magical girl genre, with Kosaki as a pastry-themed heroine, Marika is a kind of magical cop, and Chitoge is a gorilla girl.

The running gag is that their case worker Rurin, who is some kind of mouse thing, not only piles a bunch of bureaucratic paperwork onto Kosaki, who won leadership by rock-paper-scissors, but also seems to take a kind of perverse glee in watching the meek Kosaki transform, which requires a moment of stark nakedness she never really gets used to (though Marika couldn’t care less about being naked). 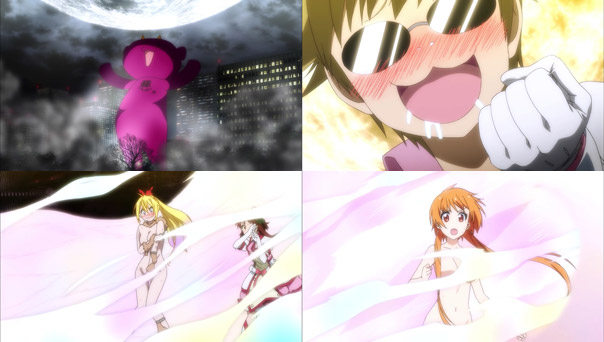 The villain, “Dr.” Maikou, is also motivated by wanting to watch the girls transform fight, and beat him, because he’s a bit masochistic that way. When the finishing move to get rid of his minion requires five straight minutes of nakedness, we never actually see it, and Maikou himself is defeated when the mouse flips Kosaki’s skirt and then punches him into orbit.

To borrow Kosaki’s pastry theme, while the show successfully pokes fun at the maho shojo genre here and there, the whole thing is pretty half-baked and inconsequential, which is appropriate as it only takes up a half-episode. It felt like one long omake.

The second half of the episode is just as thin, as it rehashes Haru’s determination not to give Raku the time of day, even as he volunteers to fill in at the Onoderas’ sweet shop. At least we see from the girls’ mother that Haru is indeed a “little man-hater” who will only be “cured” if she actually interacts with guys, rather than craft elaborate narratives about them in her head.

Raku wants to play nice, and they even connect over their shared love of and devotion to Big Sis Kosaki, who strategically left them alone so they’d have no choice but to gel more. Raku even thoughtfully praises Haru’s skills, while demonstrating he has some of his own, borne from his past experience helping Kosaki at the shop. 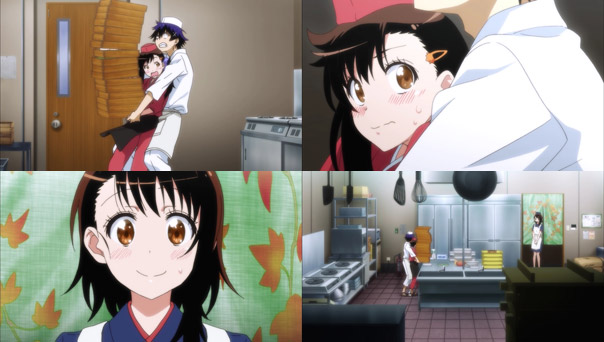 There are signs, then, that Haru is ever-so-slowly coming around to maybe accepting and even tolerating Raku’s existence, even if she still (rightfully) thinks it’s wrong for him to be going after her sister when he already has a girlfriend. And that’s kinda the pall cast over this whole Onodera situation: Raku has been wrong in spinning all these girl-plates without giving any of them the answers they deserve, and the broken locket is a poor excuse for his continued inaction.

Raku has no one to blame than himself if an outside observer like Haru sees him as a playboy, because he kinda is. Yet, as he gets close and personal with Haru—by necessity—when she tries to carry too much, it seems Haru is on her way to being one more member of the harm; albeit not by choice. 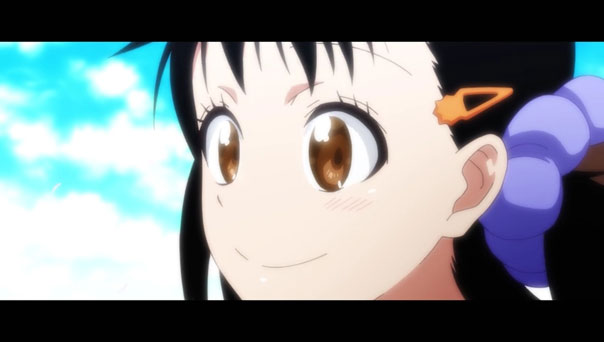 With the show lagging of late, it decides to finally introduce Kosaki’s little sister Haru. However she’s revealed in the source material, she’s possibly the Spring’s worst-kept secret owing to her prominent presence in the OP, and brought with her the potential to shake things up. Too bad she’s a dull, ill-informed, unfair, irritating conclusion-jumping, faint shadow of Kosaki; herself a shadow of Chitoge and even Tsugumi of late.

Things start off okay, with Haru heading to her first day of co-ed high school after attending a girls-only middle school. She’s so un-used to guys, being confronted by a posse of goons causes her to pass out, but not before she realizes she’s being saved from said goons by an anonymous but possibly dreamy classmate, whom she dubs her “Prince” upon waking up in the nurse’s office.

When Haru bumps into someone, scattering all her printouts, Raku, the guy who saved her, comes over to help, and she’s heartened to see there are kind and gentle guys at her school. Only when she hears he’s the Notorious Yakuza-Backed Demon School Casanova King Ichijou Raku, she backs way off, warning she won’t let him lay a hand on her sister ever again before an inexplicable wind blows her (extremely short) skirt up, giving Raku a peek at her bear-themed pantsu. Har har.

Granted, Raku makes two mistakes here: First, he doesn’t’ just come out and tell her he’s the one who saved her and carried her to the nurse’s office, which in addition to picking up the papers, means she actually witnessed three kind acts that disprove his seedy reputation. But his second error was not only to not turn around immediately at the sight of Haru’s skirt coming up, but even muttering about the bears like an idiot, killing any goodwill he may have had with her.

This hallway scene draws attention to itself with its interminable length, but maybe that’s the point: it is used to demonstrate, simply by having all of the other girls in Raku walk through that hall one by one, that Raku is a player, and we can’t fault a relatively sheltered Haru for thinking that, especially with Marika clinging to him as his gorgeous  “girlfriend” stands by (Chitoge actualy finds Haru cute—and she is—but she doesn’t know her yet). But the fact neither Raku nor Kosaki can set the record straight is more frustrating than funny. 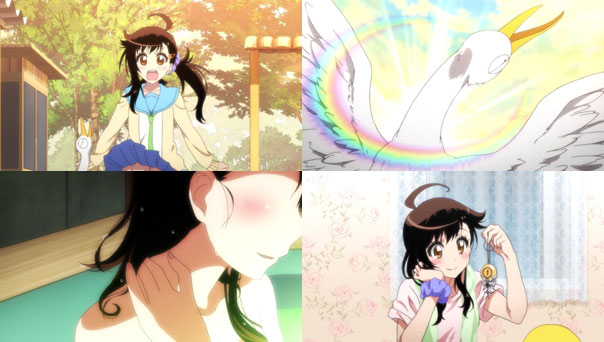 Things take a turn for the absurd when Haru, apparently an animal lover, decides to check out the same club Raku’s in. She overhears him wishing Kosaki was around and uses that as an excuse to yell at him some more about infidelity, before the goose inexplicably flips her skirt a second time. C’mon now, that was lame the first time!

This episode is redeemed by Kosaki’s simple but heartfelt explanation for why she thinks Raku is so sweet, which Haru points out is really an explanation for why Kosaki loves him. Haru is still skeptical, and I imagine she’ll remain so for at least another episode or two, but I’m weary of the fact that every time he demonstrates he’s a good guy, that fucking skirt flies up in his face.

I’m hoping Haru isn’t a lost cause, but her long-awaited intro—Adventures in Angry Little Sisterland—bombed. I came away frustrated so much time was spent on her as opposed to, say, any other character…even Paula, who has apparently decided to transfer to Raku’s school.