Phos lies prostrate before the Amethyst twins as Rutile repairs them, but once they’re whole enough to speak, it’s the twins apologizing to Phos: they were overzealous in their efforts to show Phos how badass they are and let their guard down.

Phos doesn’t feel any better about freezing up, and runs off, both to try to outrun the shame, but also because that when circumstances necessitate an immediate retreat, Phos has to be able to do it. Phos’ legs lead to Cinnabar, whom Phos still doesn’t feel right speak to quite yet. 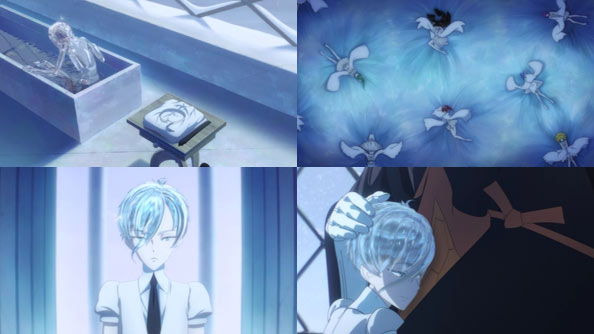 Phos’ state of incomplete development comes at a bad time for them; Winter has come, and with it the time when all gems hibernate until Spring—and sufficient sunlight for them to function—returns.

The only two who normally stay awake while the others sleep are Master Kongou, and the heretofore-unseen Antarcticite, voiced by Ise Mariya.

Antarcticite was unseen because they only become solid when the temperatures drop enough; when it’s warm, Antarcticite occupies a vat in their room, in a liquid state. “Antarc” also has a particular like of Kongou, and cherishes the time when they patrol together. 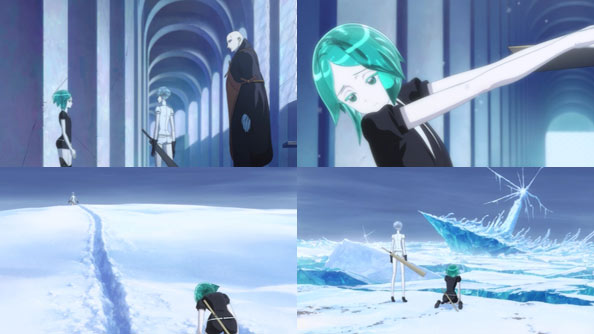 Then, while the two are hugging, Phos emerges from behind a wall. Unable to sleep, Phos requests to be allowed to stay up and train up in these harsher-than-usual conditions rather than waste them hibernating. Kongou agrees and partners Antarc with Phos.

Antarc is initially quite annoyed by this decision, but only because they remember Phos of yore, not the present Phos, willing and able to grow. When Phos tells Antarc of the desire to become better and more useful, Antarc takes a more patient tack.

Phos is particularly sluggish in the dim winter chill, but toughs it out until the two reach their destination: a field of eerily gorgeous and hazardous ice floes that let out blood-curdling screeches when grinding together.

Like Amethyst, Antarc is quick to demonstrate their duty to Phos: cleaving the surfacing ice floes with a saw in order to stop them from disturbing the hibernating Gems. Watching Antarc spring into action, balance a high heel atop the ice, then unleash a massive blow, is really something to behold.

The spectacle, and the utterly pristine whites, blues, purples and aquas of the frigid winterscape lend this episode a unique beauty, backed up by some of the most conspicuously excellent music of the show.

I’ve always liked “ice levels” as a kind of aesthetic palate-cleanser. Winter turns the Land of the Lustrous into another world, and it’s a glorious thing to see and hear. The stark beauty is nicely complemented and warmed up by the understated Phos-Antarc buddy comedy. 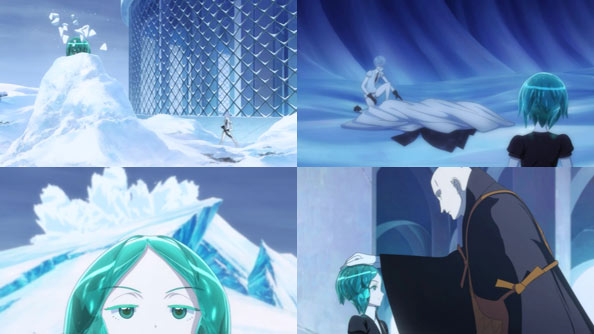 Antarc shows Phos all of the various duties they must perform; some menial, others herculean, and others downright weird, like making sure to put down the sleepwalking gems—and, occasionally, cover Master Kongou when he smashes into a wall—with blankets. Phos simply tries to keep up, but it’s a lot of work and has to be done with a minimum of energy due to the low sun.

Then, just as Phos is wondering whether they bit off more than they can chew and ponders the hopelessness of achieving their goals, the ice floes seem to call out, echoing the anxieties in Phos’ head. Kongou warns Phos to ignore the voices, giving Phos yet another challenge to overcome among all the others.

It ultimately proves too much. While out on patrol, Phos considers sawing off both arms so that they be replaced with a stronger ones, as Phos’ legs were. Phos stops themselves, but slips and falls into a frigid pool. Antarc pulls Phos out, but Phos is missing both forearms—and if they can’t be retrieved, many more memories.

Antarc has been shown to be proficient in making minor repairs, but this is a job for Rutile, who is hibernating. So yeah, we close another episode with Phos’ existence at another crossroads. Here I thought Phos would find a way to attach saws to their legs and use them to cleave the floes; now I just hope the Phos I know and love can get out of yet another spot.