The quest for Chaika’s fathers remains continues, as Guy helpfully materializes in the night to point them towards the next hero, one Simon Scania of the Koenigsegg Empire (both Scania and Koenigsegg are Swedish automakers…perhaps the writer is a petrolhead?), last seen four years ago in the town of Rademio. Unfortunately for them, the Alberic Corps has decided to defy the Council of Six after all and keep up their pursuit, confronting them on the outskirts of Rademio.

When Tooru says he’s going to have trouble with an opponent, he has our full attention, and indeed, they run into trouble fast against Alberic, Nikolai, Vivi and Leo. They only end up escaping serious trouble thanks to their trump card Dominica, who luckily happens to be in the mood to transform into a dragoon (which could be cooler-looking, IMO) and carry the trio to safety. Just like that, we’re done with the Alberic Corps in the first eight minutes. This was fine with me; I don’t mind a little bit of them like we got here, but I don’t like it when they steal too much screen time from the core trio…er, quartet.

While Tooru, Akari and Chaika owe their skins to Dominica, her fickle nature leads to their next dilemma, as she refuses to fly them around over the dangerous “Valley of No Return.” Not hanging about, Chaika starts climbing down, with the other three following, including Dominica in human form, strangely enough. The rocks they cling to end up crumbling, sending them falling. Then things get weird: Tooru wakes up, leaning against an unfamiliar stone wall, with Chaika leaning against him. When she awakes, she starts talking…normally. 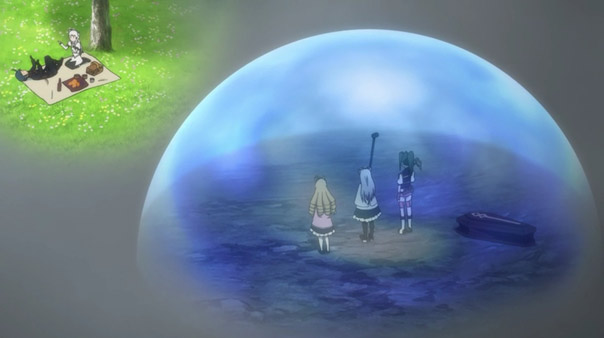 Illusion fog is nothing new, but I appreciated the sneakiness of dropping us in a strange situation and delaying the explanation, if only for a time. It’s also an opportunity for some comedy that isn’t just superfluous fluff: as Tooru falls more and more for the normal-talking Fantasy Chaika, he gets more and more lost in the fog. When Chaika betrays him, hopping on horseback with Alberic, who announces their marriage, and handing her Gaz’s decaying arm like a bouquet, Tooru is devastated, but just as convinced it’s reality.

The episode could have just as easily placed the others in fantasy worlds (Akari and Chaika’s Fantasy Toorus could have been pretty funny), I like the decision to have Dominica save them and for the three of them to be protected from the fog with a magic barrier. This also means they have to watch Tooru’s fantasy, which is why when he draws close enough for them to grab him and pull him in the barrier, Akari slaps him into coherence a bit harder than she probably needed to, and Dominica gets some pretty good punches…’cause why not?

After some nifty utilization of Chaika’s Gundo (interestingly, there’s no mention of her low magic fuel level), they destroy the source of the magic fog, revealing the hermit Simon Scania, a bitter, somewhat manic shell of his former self. Unlike previous heroes, he doesn’t give a hoot about the remains in his possession; he’d been spending the last few years stewing over his friends betraying them by having the fog create the same situations for intruders, the bones of which litter the area. 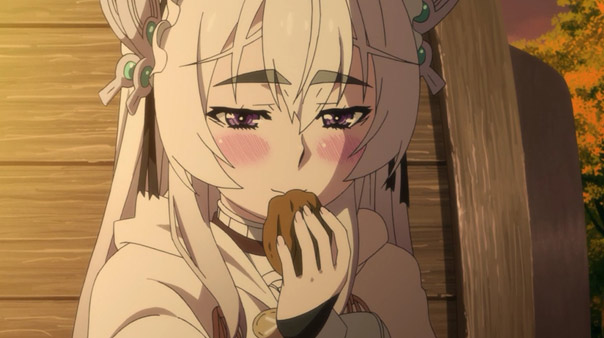 The guys grab Gaz’s leg and wisely slink away from the wretchedness. In the more lighthearted parting scene, in which Chaika starts to mention how she didn’t mind Tooru’s fantasies of her (before the betrayal part, which she’d never do), but she gets angry when Tooru laughs it off, while Akari peeks her head out to dispute his claim she’s “out of the question” for him. It’s not so much he’s unaware both girls like him; he’s just fine with things as they are.