SGRS has played a clever trick. I thought this show would be about Yotarou, the reformed thief, but he hasn’t been present the last two episodes. Instead, it’s been young Yakumo’s, or I should say, Bon’s show.

And that’s totally all right, as he puts immense craft, care, and detail into his quietly epic life story, a large part of which contained Sukeroku (AKA Shin) who is absent from the present world. In hindsight, that absence and the events that let up to it (which have yet to be told) are given greater weight with each new section.

In the midst of hanging out offstage with the “house band”, Bon, who had no prior interest in or time for girls, meets Ochiyo, a girl he becomes interested in and spends lots of time with. The warm fondness and melancholy in present-day Yakumo’s voice makes the couple’s inevitable separation really sting.

That hurt is somewhat mitigated by present-day Yakumo keeping Ochiyo’s promise to never forget her, because here he is telling us about her! The reason she has to leave Tokyo is basically the same reason people start leaving Tokyo in droves: World War II is about to break out. The dread of that fact is underlined by highly effective use of loud white noise, which swells and cuts out suddenly, creating tension and foreboding.

The government starts censoring rakugo just at the time Bon sees the raunchier stuff as his way in, almost as if the universe were blocking his path. Soon it’s just the master and his two students, and he only takes Shin with him to a kind of USO tour in Manchuria, sending Bon and his bad leg to the country with the mistress. But the night before Shin leaves, Bon has his brother pinky-swear that they’ll see each other again.

Bon gets a job in a factory, meets another nice girl, and settles into a provisional life, a life without Rakugo he never thought he’d have to deal with until it came. Sure, he’s not exactly on the front lines or anything, but his suffering is borne of not being able to take the path he wishes due to, well, history itself. 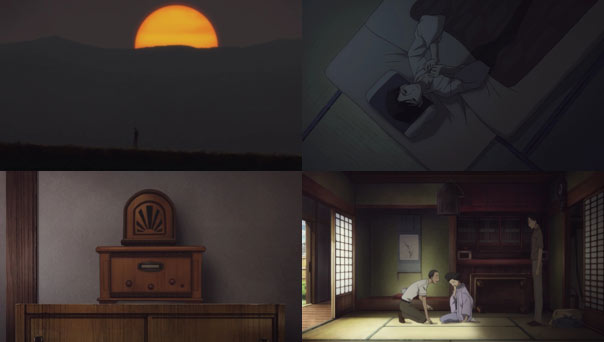 And yet, he never fully gives up on rakugo. He stuffs the books in the closet, but he still tells stories to himself when he feels down. He finds the rakugo heals and fuels his troubled heart; it gives him vitality and hope. And then, one day, just like that, the war is over.

More white noise, and a few well-chosen sights like a cloud in the sky and the sight of a radio broadcasting the emperor’s surrender mark that new event. When it comes to depicting the parts of the war we know well, the show doesn’t show much, because Bon himself doesn’t see any of the horrors.

More than anything, both Bon and the Mistress miss Shin and the master terribly, and even some time after the war continue to live in a kind of limbo as they await a return that may never come. The good news is, rakugo roars back into popularity, including the kind best suited for Shin, who gets a promotion and gets very busy very fast. 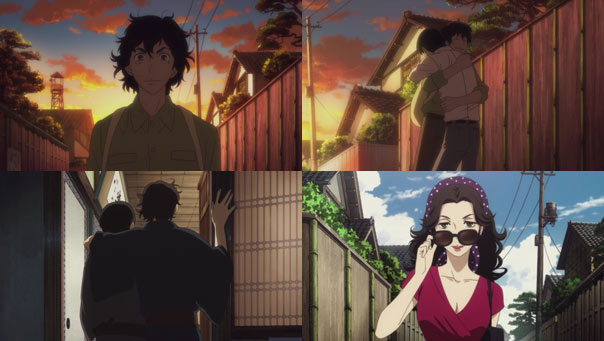 He gets so busy, he’s totally caught off guard when one dusk, just as suddenly as Ochiyo, and country life, and the war, and loneliness, came and went, Shin, Bon’s brother and other half, returns. Five years had passed mercilessly, heartlessly, but by the end of it their promise was fulfilled and they were together again. They ease back into theater life; rakugo life; and peace. Only now, no doubt, with so much time spent apart, this family understands and appreciates far better what it means to be together.

And speaking of reunions, who should show up at their door but Miyokichi, a beautiful young woman. The brothers have competed in rakugo, and endured separation for an entire war’s length. Will their next trial be a love triangle?