With the BoB behind us and a week removed from a recap, I was eager to get back to Sword Art Online, and maybe get some more scenes in the real world between Kazuto and Shino. Alas, Sugu tells Kirito that someone’s after the Holy Sword Excalibur, and he’s back off into MMOLand.

Sinon unfortunately just becomes one of the gals, with cat ears and a tail that’s seemingly specifically there for Kirito to pull in jest. Kirito and Sugu gather Asuna, Yui, Klein, Lisbeth, and Silica to complete their rather large and ungainly party of eight. I can’t say I care all that much about Klein, Lisbeth, or Silica; but they’re here, and I suppose they’ll have a unique use as this arc progresses.

The characters descend into the frozen wastes of Jotenheimr, which is below Alfheim but above Niflheim. There, Sugu summons her friend she rescued from baddies: a very cool-looking eight-winged elephant-octopus thing she named Tonkii that kind of freaks everyone else out a little but proves helpful.

Once the party boards him, they fly through the skies of Jotenheimer until “Urd, Queen of the Lake” appears to deliver quite a bit of exposition about the arc to come. She and her two sisters are of the Hill Giants, who were subjugated by the Frost GIants led by King Thrym of Niflheim who ascended to Jotenheimer and disconnected the roots of Yggdrasil, turning the verdant paradise into the arctic wastes we see.

He did that with Excalibur, which means if Kirito & Co. can retrieve it, the frozen castle Thrymheim that is lodged in the rock ceiling will descend and return Jotenheimer to its previous state. Since he wanted to grab Excalibur anyway, Kirito and Urd’s goals match. I’m not sure what to make of this all yet, but the striking visuals of the new landscape were marred by the sudden gaggle of old and not entirely compelling characters. 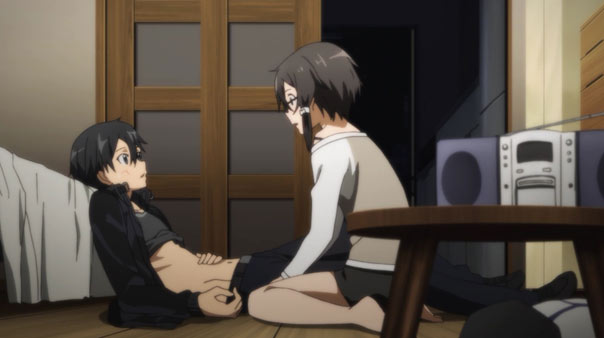 I was initially a little disappointed that yet again a Damsel in Distress would be rescued by the valiant Kirito, and then Kyouji proceeds to pin him down and inject him. In that moment, he’s the damsel now, and it’s Shino who saves him by knocking Kyouji out with her boombox. Sure, the lethal injection didn’t enter his body (Kyouji just happened to shoot into an electrode on Kirito’s chest which is lucky to say the least), but Shino still saved him, and herself, from the psychotic Kyouji.

In the next act, Shino shows how much she’s grown since meeting Kirito and winning the BoB: when three bullies ask her for money, she politely refuses; when they pull a gun on her, she freaks out a little at the sight of it, but recollects herself. When the girl can’t pull the trigger, Shino disarms her, turns off the safety, and hits a can dead on from pretty far away, revealing it’s a BB gun. Then she puts the safety back on and hands it back to her terrified would-be tormentor.

It’s an immensely satisfying exchange, escpecially when Shino’s out of sight and nearly collapses from anxiety afterwards. She didn’t suddenly become Rambo in the real world, but she’s taken the crucial first small step, and she’s going to keep taking more. It’s also pretty funny that Kirito picks her up from school in his motorcycle, which creates a small sensation from Shino’s classmates and likely raises her stature in the school a couple of ticks, simply because they don’t know that Kirito’s actually a bit of a dweeb.

What follows is unapologetic exposition about the three people who together were Death Gun in and out of GGO, and how they planned to take out powerful players. Both Kyouji and his older brother were fueled by envy of those more powerful, while Kyouji himself dealt with the additional stress of being the heir to the family hospital after their dad gave up on his older brother. As their plan to kill elite players got more realistic, the virtual world became his reality. 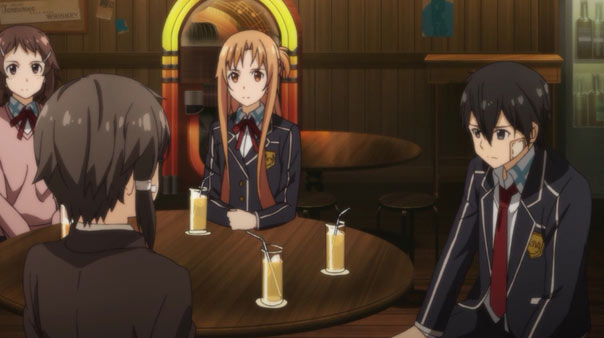 Here, Shino shows a different kind of strength when she insists on talking to Kyouji as soon as it’s possible. Even though he did terrible things to her, he was a broken person, and she doesn’t want him to keep on being broken. She herself once sought power in GGO, and risked having that world become more real than her own. Her apparent willingness to forgive Kyouji may be more than he deserves, but its her right to bestow that forgiveness if that’s what she wants.

The final and most powerful act of the episode that redeems the somewhat boring Death Gun infodump is the sort of intervention-light that follows. At first it seems like Kirito is just going to introduce her to Asuna and Rika, but then he reveals (and apologizes for) his true intent: for her to meet the post office worker whose life she saved by killing that gunman. The worker comes with her adorable four-year-old daughter, whom she was pregnant with at the time of the incident, so Shino saved two lives in one.

One can weigh the pros and cons of one’s actions all they want in one’s head, but having grateful beneficiaries of your actions staring right at you, thanking you profusely and giving you a drawing is another thing entirely. Because she saved lives, she has the right to forgive herself for taking one, as much she has a right to keep blaming herself. While certainly a delicate and highly personal situation, Kirito went through a very similar thing, and because he and Shino became friends, he did all he could to help her, as did Asuna and Rika; before they even met her.