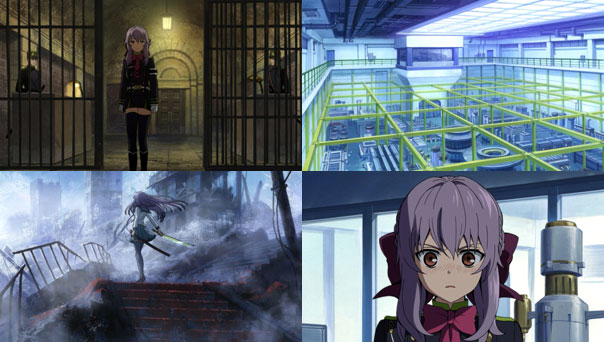 The final Seraph of the End episode until October was quiet, contemplative, and suffused with unease and a kind of restlessness that’s understandable considering what everyone just went through and how still things stand now.

The only battle being fought is Yu’s slow but apparently certain recovery. It’s a battle we don’t see, because most of the episode is from Shinoa’s point of view. She’s an uneasy, impatient, somewhat outraged Shinoa who wants to know what the hell was in the pills Guren gave her to give Yu. 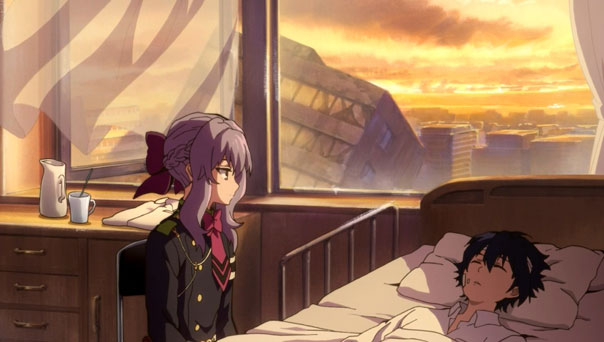 When she uses her family name to get into a top-secret installation where the army is experimenting on vampires and wants to have words with Guren on the matter of Yu’s little transformation, Guren has no words of comfort for her, except that if she thinks she’s fallen for Yu, all she can do is stay by his side and wait for him to wake up.

Since Yu’s well-being is more important to her than whatever devious mad-scientist shit Guren is up to, she does as Guren recommends, pleading with the comatose Yu to please wake up soon. 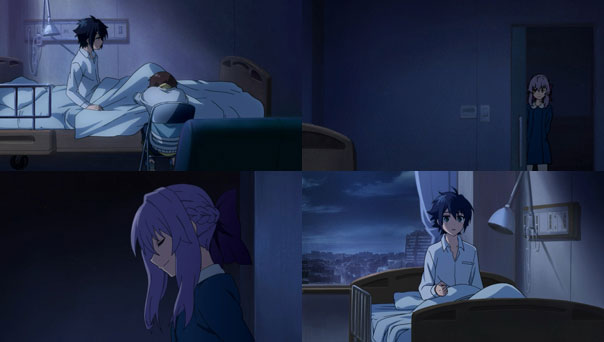 Unfortunately for Shinoa, it’s Yoichi’s turn to sit by Yu’s bed when he finally does wake up, though Yoichi has the good sense to let Shinoa have some time to herself with him before calling the others in. The camera slowly pans from Yu, crying over having seen Mika alive and well, to Shinoa lurking in the doorway, snapping into smartass mode, hiding the worry she wore on her face while he was out and teasing him for crying, even though she’d do the same thing in his case. 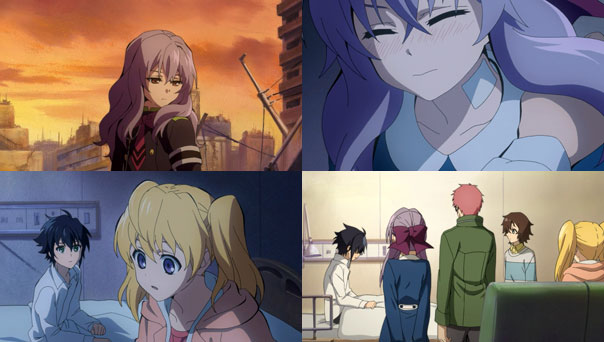 Being a Hiiragi whose sergeant rank is lower than it could be if she played the game, and the fact she got into Guren’s lab, we know Shinoa knows more than any of the others the dark directions their duty could take them, and in the brief flashback as Shiho carries Yu away, there’s a hint of guilt in her face, as if she’s facilitated Yu’s transition into something way bigger and nastier than he’s aware of.

Yet none of that matters when Yu places his hand on Shinoa’s shoulder, voicing concern for her bitten, bandaged neck. She doesn’t want to be in love with her underling, but as she learns more about the person Yu is, that’s increasingly the case, as her blushing betrays.

Even better, Yu makes himself to be someone worthy of being fallen for, as once everyone is assembled in his hospital room, he takes the time to earnestly thank everyone from the bottom of his heart, and express how blessed he feels to have such good friends. Mitsu and Shiho are taken aback by this change in him, but Yoichi and Shinoa less so, as they know him better and have seen hints of this side before.

Yu isn’t just happy because he’s okay and his friends are okay; he’s also elated that Mika is alive, an attitude I’m frankly glad for. There’s no angst in the way things are. Friend or foe, Mika is alive, and that’s enough for him, for now. It’s the first time in a while that something has been enough for him, and while he yearns to see Mika again (and Mika him), his provisional inner peace is clear to see. He’s realized his live isn’t that bad, and is worth preserving, both for his friends’ sake and Mika’s.

I was totally on board with the peaceful end to this first rousing cour of Owari, especially all the scenes of people on both sides just kicking back and enjoying their hard-earned break from death and destruction. But judging from the final scene, that peace will be short-lived. Lord Ferid is apparently exchanging research with, and I’m just guessing here, Guren, both motivated perhaps by their mutual disgruntlement with the higher-born higher-ups.

Just as it wasn’t 100% clear it was Guren on that rooftop (we never see him), I’m not sure if Ferid is working against the vamps, Guren is working against the humans, or both of them are just working towards their own goals. But whatever it is, Ferid believes it’s going almost too smoothly, and it definitely stirs up intrigue for the second cour this Fall, in which everyone continues to be sinners, doing sinner shit.

Mika has finally reunited with the one surviving member of his family, Yuu, who he’d shoved and insisted he run away while he was bleeding on the floor many years ago. The conditions of their reunion aren’t ideal, what with Yuu’s sword being in Mika’s chest, but once Yuu sees Mika’s face, he’s unable to close the deal and kill him, even though Guren is yelling at him to do so. Yuu may be getting used to his new family, but faced with his original family, he can’t do anything, even if Mika is in a white coat.

Mika’s plan is as half-baked as the original plan that got the two of them in their predicament to begin with: he wants to run off with Yuu. But where? How? What will they do? How will they live? For all the years he’s had to think about it, it just doesn’t seem like he’s thought about it that much. All Mika knows is Yuu is being used (Yuused?) by the other filthy humans, and he wants to run away with him. Yuu…isn’t so sure. Those filthy humans are his friends and comrades now.

Mika literally whisks Yuu away in his arms, but Yuu resists, looking back at a troubling sight: all of those friends being restrained by powerful vampires, some of whom proceed to feed off of them. The Extermination Squad has never been in a worse way, and thoughout these intense cuts I was screaming at Yuu to do something, anything to save them. At the same time, I knew in his current state there was no way Yuu would be able to save everyone at once.

Finally, as if a switch were flipped as a result of his predicament, one of Yuu’s eyes fills with blood, and he recedes into his subconscious, where Ashuramaru tells him even she fears the monster stirring within him and advises him to run off with Mika. But that’s something he simply can’t do; his loyalties between his friends and Mika are split down the middle.

The monster awakens and erupts from him, and he proceeds to go absolutely berserk on vampires and humans alike, something Guren apparently had been expecting, calling Yuu his trump card. Yet Yuu is about to slice Shinoa in two when Mika of all people comes between them, urging him not to kill humans, lest Yuu become like him. Then Shinoa manages to grab hold of Yuu and calm him down, but she’s obviously quite freaked out by the whole situation. No casual banter this week, no siree!

Then Shinoa’s relative—maybe brother?—shows up with the cavalry, praising Guren’s “low-level” outfit for holding out as long as they did before ordering the live capture of the nobles. And just from the badass look of the guy, that order doesn’t sound all that far-fetched.

While it looks like the humans may be on the verge of winning the day, Yuu has clearly been changed forever, both in now knowing Mika is still (sorta) alive, and having awakened the indiscriminately ferocious beast within him. Looking forward to the aftermath in Owari’s first cour’s final week. 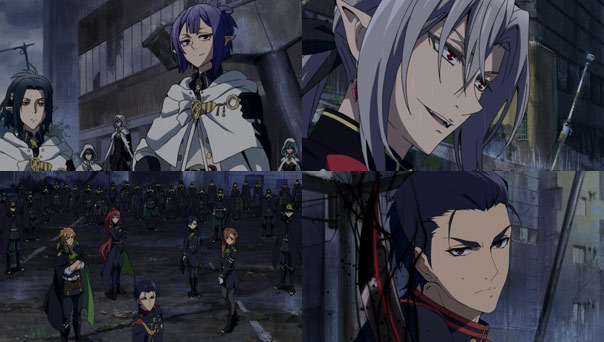 A bunch of vampires go up against a bunch of humans this week, and in a show that I’ve felt for a while now has only eight or nine tenths of the budget it should, the seams were more visible than usual this week.

Showing everyone posing and looking menacing is all well and good, but once the action actually starts, much of it is slow and choppy, or simply not animated at all. The pans of still shots with moving scratches on either side is an old trick when you can’t animate everything you want, but they looked cheap.

Since there’s a flashback to when Mika first proposes “doing something” about his and Yuu’s family escaping (something Yuu thinks is inconceivable, calling Mika a weirdo), we knew the reunion between the two brothers was imminent. However, several events delayed that…and worse, they kind of felt like stalling.

After Yuu and Shinoa drop the corporal off at the hospital, Yuu hears that a unit of three Demon Moons are in trouble. Assuiming it’s Shiho, Yoichi and Mitsu, he ignores Guren’s standing orders to help them out. Shinoa follows, because like him, she cares about her new family.

Their friends turn out not to even need their help (while Yuu and Shinoa both save Shiho and Mitsu from attacks from behind, they were the ones who distracted them in the first place). But Yuu tells Shiho it’s not that he doesn’t trust them to carry their weight or survive their fights. It’s the fact that they’re family, and if he hears they’re in trouble, his first priority is to them. 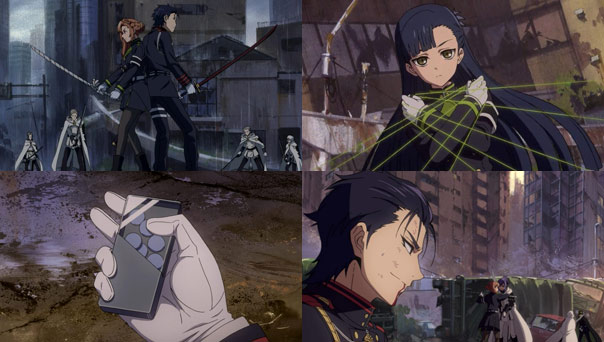 Helping them and ensuring they’re safe has not become as if not more important to him as killing vampires. But you can’t help but think one or more of his new family will lose their lives at some point, and it’s important not to fall into a cycle of love and despair; that’s no kind of life.

The more elite Demon Moons are having a little trouble with Ferid’s similarly elite squad, and Guren has trouble with the incredibly strong (and arrogant) Mikaela. Again, the battle is made more underwhelming thatn it should have been with the same technical problems I mentioned earlier. Guren resigns himself to the fact he’ll need to take two pills; I was left wishing the show had taken two pills. 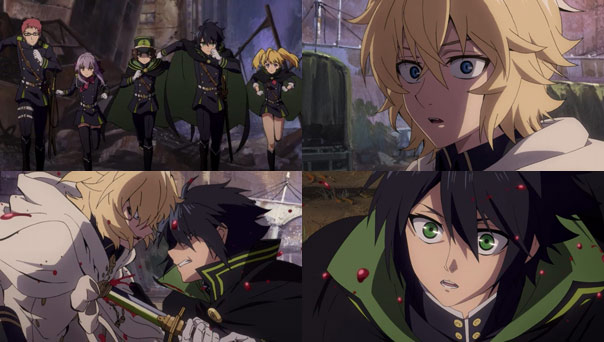 And while Mika, Ferid, and a lot of other vamps and humans spent a lot of this episode standing around talking about fighting rather than actually doing so, Mika decides not to give Guren twenty seconds for his pills to kick in, and stabs him in the chest.

Before he can land the killing blow, more humans arrive, and when Mika turns around and sees Yuu’s face, he freezes. Yuu stabs Mika in the heart with full force, but half a beat later, recognizes him. And just like that, childhood friends and adoptive brothers, reunited with blood and steel. Considering the casualties on both sides, I imagine a mutual retreat next week.