The first half of this week’s episode introduces us to the last member of the ensemble, Wakamatsu Hirotaka. He’s on the basketball team, but is always getting rammed by the out-of-control Seo Yuzuki. It’s stressing him out and leading to insomnia. 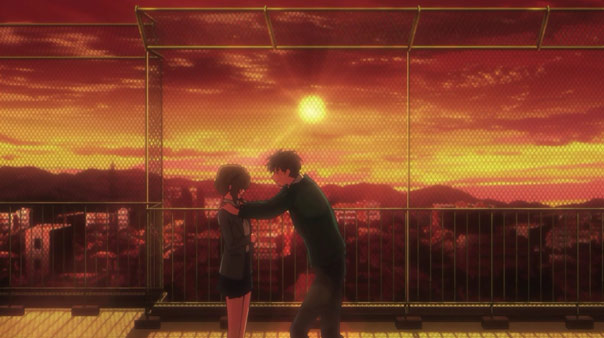 Nozaki provides a remedy, if technically by accident, when Wakamatsu is over at his place. He switches on his iPod and a recording of Yuzuki’s beautiful singing voice comes on, putting Wakamatsu to sleep instantly. Yes, the source and solution to his stress are the same person; he just doesn’t know it.

This is not at all a bad premise for a shoujo manga, and Wakamatsu decides to confront Yuzuki with methods used in manga: leaving a note in her locker that Chiyo thinks is a love letter; meeting her atop the school at dusk; even using gloves to challenge her to a duel. But even if Waka executed all of these perfectly, Yuzuki takes everything precisely the wrong way.

Even when he yells at her, she’s too busy thinking of a nickname for him, and when he gives her gloves, she believes the whole meeting was so “Waka” could give her a gift. It’s a case of two people who like each other, but are on such different wavelengths they’re unable to connect.

Part Two deals with another common shoujo scenario: the girl lovingly nursing the sick guy back to health. Naturally, there’s a twist to it, as Chiyo isn’t the only one the ill Nozaki sends an SOS text to. Waka and Hori also arrive. Nozaki doesn’t need medicine; he just wants someone to stay in bed for him, as if following the spirit if not the letter of doctor’s orders made any sense. 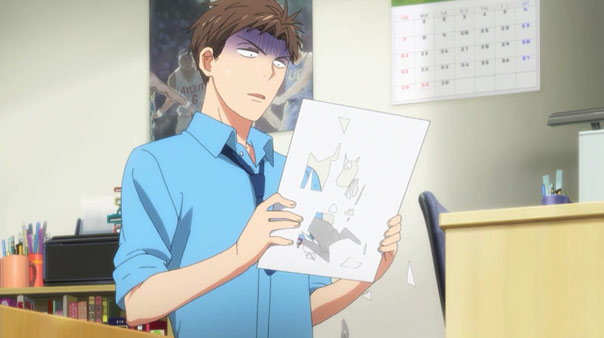 Instead, Chiyo insists he stay in bed himself, and she and Hori decide to finish his manga for him before tomorrow’s deadline. Being the seasoned manga senpais to Waka is of no avail when they discover screentone has to be applied to the pages, something they’ve never done. Waka proves better at it than either of them.

When Nozaki is too rambling about the dialogue, the three decided to add their own, with Chiyo and Waka using Yuzuki as a template for Mamiko, while Hori uses the same shimmering background for Suzuki, projecting Kashima. They finish the manga and it’s technically fine, but content-wise it’s a hot mess, and Nozaki has no choice but to ask for an extension. 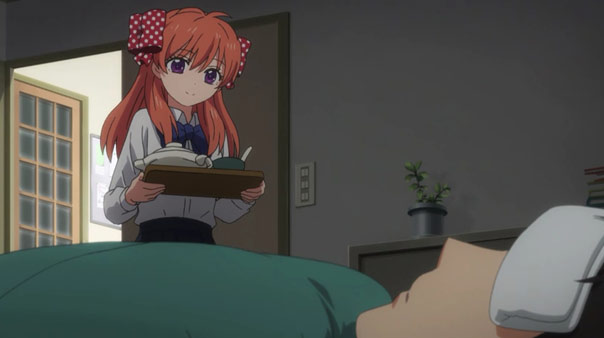 Yuzuki-as-Mamiko is pretty funny, and a nice call-back to the first half story. It seems the show will rarely combine all seven members of its ensemble for one story, unless of course all of them end up going on a trip together or something. having a different combination of strong, quirky personalities each week is keeping things fresh.

This week introduces us to two more characters who appear from the OP rainbow heretofore unknown to us: the short-statured drama club president Hori Masayuki, and the dashing, statuesque, academically and athletically gifted “Prince of the School”, Kashima Yuu.

With six of seven listed main characters now introduced, rankings are inevitable, and sadly it’s been a game of diminishing returns. We like the pair of Chiyo and Nozaki the best, followed by Mikoto and Yuzuki, and finally Kashima and Hori. And we like Kashima considerably more than Hori. Hori’s a bit of a dick!

Maybe he’s a great actor trapped in the wrong body, and he’s got that chip on his shoulder. He certainly likes Kashima far more than he lets on and genuinely wants her to shine on the stage (which she does). But what’s with all the physical abuse? None of the instances where Hori hit Kashima were what I’d call abhorrent…but they weren’t that funny, either.

Let’s just call them..awkward, shall we? If she’d hit him back once or twice, maybe it wouldn’t have rubbed me the wrong way, but it’s very one-sided and repetitive: she pisses him off, he draws blood. Too often Kashima came across as a big dumb lovable punching bag for Hori’s frustrations, which overshadowed her more positive qualities and sapped some but not all of the comedy. 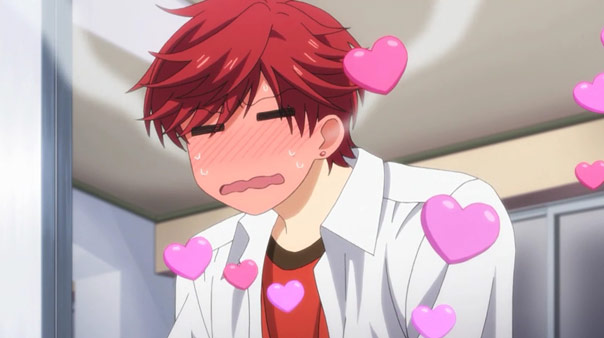 This week Chiyo doesn’t make any notable progress in advancing her relationship with Nozaki-kun. But that’s to be expected in just the second episode, when several quirky characters who appear in the OP still need to be introduced. This episode unveils two of them: Nozaki’s friend Mikoshiba “Mikorin” Mikoto in the first half, and Chiyo’s friend Seo Yuzuki in the second. Both feel like fun additions that expand the show’s avenues for comedy.

In that regard, the two are getting closer in that they now know each another’s friends. What’s so funny is, neither really knows why the other is friends with them at all, as they’re both quite the handful. Mikoshiba is a playboy immensely popular with the girls, but he’s embarrassed of his own over-the-top flirtations. Despite his looks and typical behavior, he’s a super-shy dude.

He and Chiyo don’t quite get along at first, and Chiyo mostly tolerates him as he looks down on her, then relying on her to keep busy at Nozaki’s studio. After a game-show inspired “draw-off”, it’s established he’s not good at drawing anything…except for the flowers and details that surround characters, which he’s really good at; though not enough restraint with that element makes for irritating heroes. (The draw-off also shows Chiyo’s really good at classical rendering.)

What’s great is that Nozaki uses Mikorin’s personality as a model, not for his heroes, but for his heroines, something made plain as day to Chiyo after a cursory gaze at one of Nozaki’s pages. When he wants to come up with a new model and asks Chiyo if she knows anyone appropriate for a shojo character, Chiyo comes up with her friend Seo Yuzuki.

Yuzuki just happens to be running for her life from teachers like some kind of delinquent, and when Chiyo tells Nozaki Yuzuki gets people angry easily, Yuzuki demonstrates it right in front of him, though not intentionally. She’s simply extremely oblivious, also ably demonstrated as she walks through a photo being taken, over wet calligraphy ink, and right between a guy confessing to a girl.

Her antics on the basketball court—and the way in which the team (and ostensibly other sports teams) use her as an example of what not to do—are also a reliable source of laughs, especially considering she believes her problem is she’s too perfect. Still, her charm and charisma wear Nozaki down until he’s happily taking her half of the work a teacher assigned them. Sometimes she can seem like pure evil, yet she the singing voice of an angel.

She really reminds us of a more oblivious Himeko. In fact, the whole episode had a similar air to Sket Dance’s excellent ninth episode, in which a mangaka is looking for interesting characters around school, and the Sket-dan make a highly unconvincing case for themselves until the last minute. Nozaki and Chiyo need similar convincing that there’s more Mikorin and Chiyo than their very evident negative qualities they exude at first blush.