The original Sword Art Online theme plays triumphantly the SAO OGs and additional allies from ALO (including the dearly departed Yuuki’s Sleeping Knights) dive into the game, having converted their accounts to the Underworld. Their arrival allows Asuna crucial time to fall back, heal, and create a better strategy for the battle. It’s also a chance for Renly to see, through Liz and Silica, that not all real worlders besides Asuna are scary.

As Kirito’s friends and family dive in, Higa notices sudden momentary blips of activity in his catatonia. Thinking everything through out loud, he determines that despite having never made a Fluctlight of Kirito and despite the damage that has been done to his self-image, Asuna, Suguha, and all of his friends collectively represent a backup they can use to restore most if not all of what he’s lost.

Things get very technobabbly here, but nothing Higa proposes clashes with the fictional science laid out thus far. But if Gabriel Miller’s force and/or the JSDF escalate the battle, irreparable damage could be caused, so the procedure must be begin immediately, while everything is online and the source of the backup self-image (i.e. those closest to Kirito) are still diving.

Higa volunteers to go on an extremely dangerous mission into the bowels of Ocean Turtle where his scrawny frame will be able to access Kirito’s STL control panel. Kikuoka and Rinko will deploy the experimental Ichiemon robot as a decoy, while Mr. Yanai asks to join Higa, in case someone needs to take a bullet for him. An honorable sentiment, but this guy practically screams “Gabriel Miller mole.”

The rest of the episode is spent resolving the battle between Bercouli and Vecta; losing one arm barely slowed the guy down. And here, the animators decided to go for much thicker lines and bolder colors than the softer scenes with Asuna & Co. and on the Ocean Turtle. The more intense visuals befit a boss-vs-boss battle, in which every strike creates a shower of sparks and tears the earth asunder.

Bercouli isn’t fighting to win on Vecta’s terms, but seeking to kill him using his unique time magic. Once he locates the afterimage of Vecta a bit less than 600 seconds ago, it’s just a matter of waiting for the proper moment to strike. His dragon Hoshigami (the reflection of whom Vecta sees within Bercouli’s eyeball) buys him invaluable time, and he doesn’t waste it. Once he slashes Vecta’s past, Vecta’s present body shatters.

Vecta is defeated and Alice is safe (for now), and without any help from Sinon, who is presumably still en route. Unfortunately, Bercouli doesn’t survive the battle either, and is dead before Alice comes to. As she cries out in anguish, his ghost tells his apprentice and daughter she’s done well and will be okay without him. Then the Administrator of his memories (one who he notes is still warm, kind and can smile) appears and joins him on his dragon ride to the thereafter.

Fanatio can sense when Bercouli has died, and she too has a quiet moment of grief, promising him she’ll raise their daughter, still in her belly, to be a “gallant, proud human” like her father. Back at Ocean Turtle, Gabriel wakes up, gets a quick report on the American MMO forces and Vassago, then has his personal “Subtilizer” account converted. No doubt he’ll return even stronger than Vecta was—and be a prime final boss for Kirito, if Higa is able to revive him. 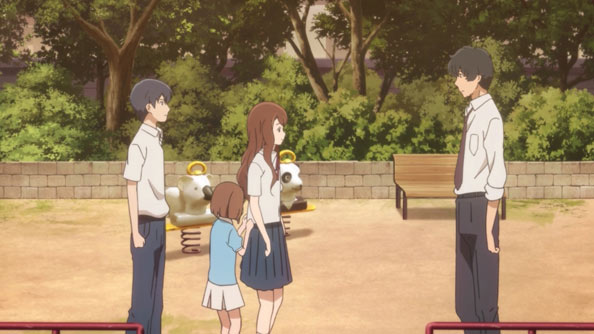 Just when Asai determines Mari is the result of her mother’s ability to create a clone of her never-born daughter, an agent of the “Bureau” (or “Kanrikyoku”), Tsushima, arrives to take her away.

The father left town, and now the mother will do the same, leaving the virtual Mari a virtual orphan. That doesn’t sit right with Asai, so he has Haruki reset, and the formulation of a plan commences. 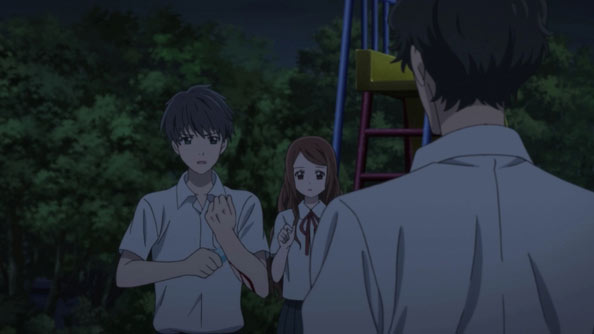 It’s actually pretty impressive how quickly and efficiently Asai directs the service he and Haruki are likely going to be providing throughout the run of the show: “erasing tears” by resetting and fixing the cause of those tears.

Their classmates assist with their own abilities, but when the one who allows Asai to share his memories with Haruki bristles at the prospect of defying the Bureau, Asai cuts himself with a broken ramune bottle until Tsushima gives permission. 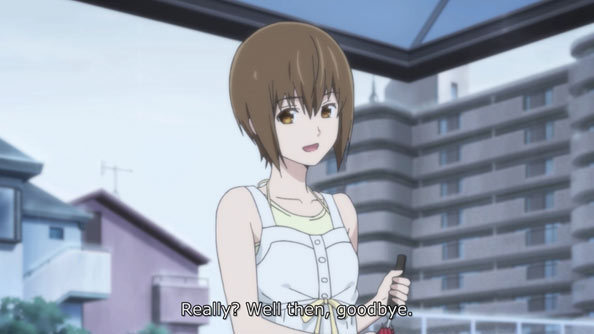 Everything works out perfectly: Asai, with the help of the rest of the group, is able to show Mari’s mother the error of her ways; to stay and continue raising the girl who may not technically be her real daughter, but loves her nonetheless.

With Haruki and his classmates’ combined powers, Asai has gained the power to “erase sadness.” In the process, he’s also managed to awaken some feelings in Haruki, though the road is long.

He discusses this in great detail with Souma Sumire, who is a tough nut to crack: you get the feeling she’s glad Asai may have found his calling, but a part of her also regrets bringing him and Haruki closer together. 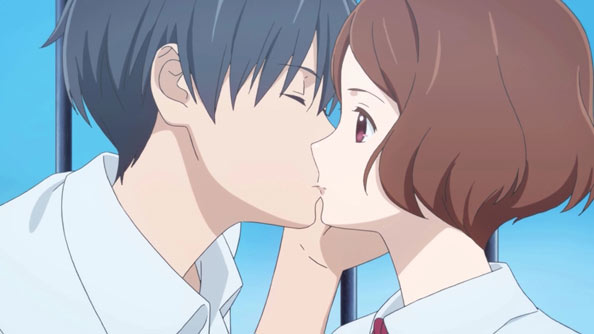 Mind you, the relationship between Asai and Haruki doesn’t become a romance overnight. After all, Haruki has only gained back a small portion of the full spectrum of emotions most humans carry and experience. She cuts her hair at his suggestion, but also confuses trust with love. Asai proves it when they kiss and there’s no spark.

Then he undoes the premature kiss by asking her to reset. After seeing what they managed to accomplish with Mari and her mother, Haruki believes following Asai’s lead is her “zeroth rule”, so she complies. 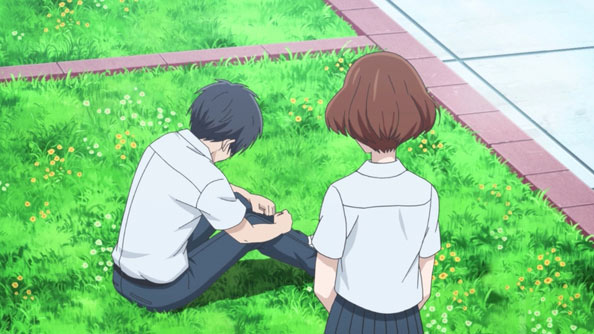 But in the period between Haruki’s Save Point and her Reset, Souma Sumire falls from the bridge, into the river, and dies, as we witnessed at the end of last week’s episode. Seeing her wearing the dress and holding the red umbrella rendered her a dead girl walking, and gave her last conversation with Asai far more significance than he could comprehend at the time.

When Haruki finds Asai quietly mourning on the rooftop, she demands he instruct her to reset…unaware she just did, and it’s too late. When she sees Asai crying, she can’t help but do the same. She’s following his lead, but also realizing that this is what the two of them have to stop from happening to others at all costs. 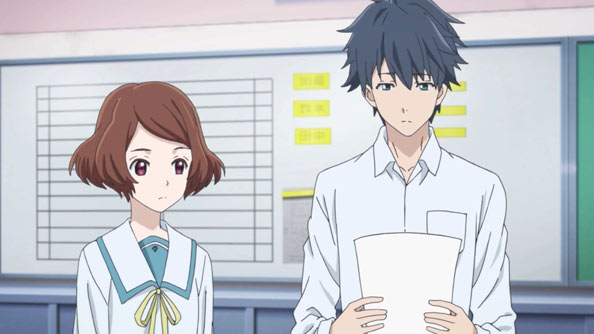 There’s a huge jump of two years to when Asai and Haruki, now high schoolers, are recruited by Tsushima into a Bureau-sanctioned “Service Club”, where they can erase sadness in an official (and supervised) capacity.

It’s a pretty jarring time leap, to be honest, but it means the first two episodes were always meant to be a prologue in which the pairing of Asai and Haruki was made and their shared calling revealed. Now the real work begins: both the sadness-erasure work, and the emotional-awakening-of-Haruki work. 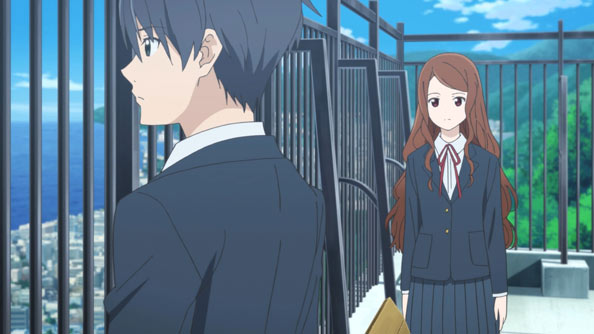 Asai Kei is introduced by class rep Souma Sumire to Haruki Misora, a stoic and seemingly emotionless girl who has no friends. Because Haruki has the ability to “reset” the world up to 3 days into the past, and Kei has a supernatural five-sense memory, Souma believes they’re perfectly suited to joining forces for good. 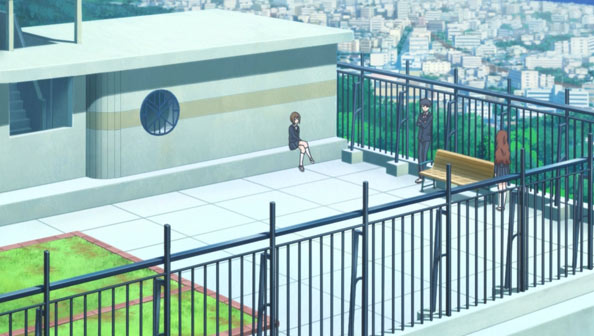 Sagrada (or Sakurada) Reset is a bit of an odd duck, like its two leads. On the one hand, it subtly, delicately paints the picture of a small town that is totally normal except for the fact that half of its residents possess supernatural powers. It also delves, if not too deeply, into some interesting philosophical ideas about what constitutes “goodness”—Sumire’s story of Zen and Gizen to Asai being one of the episode’s high points. 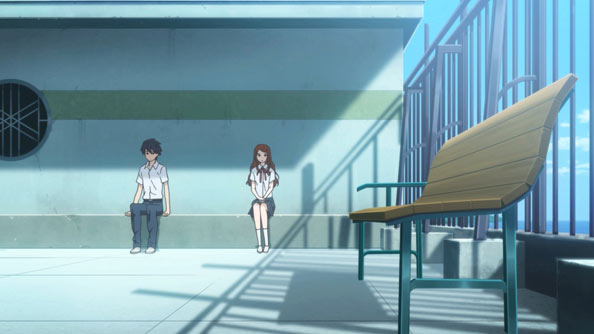 But there are a few issues. First of all, this episode felt like it took forever to run, and although it accomplished a lot, it just didn’t feel that eventful. That may be okay in a 24-episode show, but the earlier a show can impress me and draw me in, the more likely I am to commit to such a show.

I also don’t mind a matter-of-fact, stoic duo, but that comes with the caveat that sometimes scenes are going to feel slow and listless. It didn’t help that this was a very talky episode, and neither Hanazawa Hana nor Ishikawa Kaito ever raise and barely modulate their voices throughout all this talking. Yuuki Aoi breathes some energy into Souma, but I wager she’d be the quiet character on any other show. 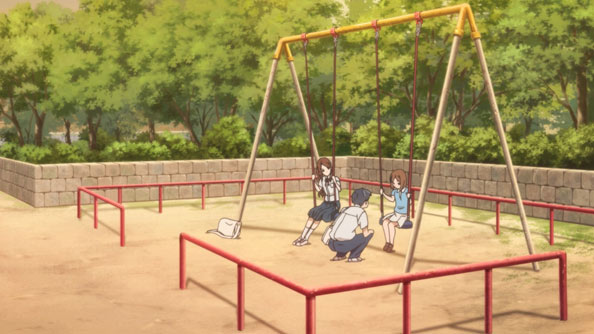 The episode also seemed reluctant to demonstrate the characters’ special abilities (and didn’t even name one for Souma, who may well not have one); indeed, if one were to blink when Haruki whispers “Reset” in the wind, you’d miss her ability altogether. Yet on another level, it’s intriguing that such powerful abilities are presented so plainly and elegantly, rather than, for example, a CGI light and effects show, or even worse, floating TV screens.

Two things at which Reset excels is its ambient sound design, and it’s awareness of its leisurely pace, which it uses to drop a sudden twist at the end: that the little girl Haruki has been sitting with recently has actually been dead for seven years. I definitely want to learn what’s up with that and how such a predicament will be resolved (presumably by our duo), and so there’s a hook for continuing to watch. 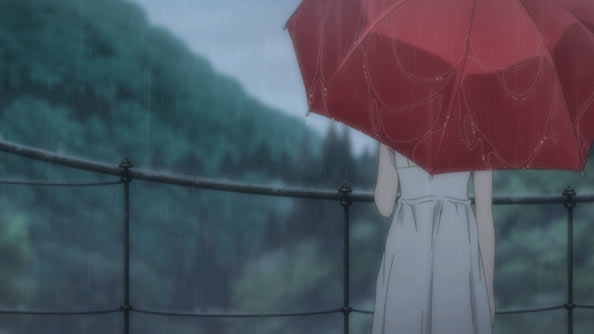 The “cold close” apparently showing Souma (same hair and eyes) falling off a bridge to her death compounds that desire to see what happens next. Like Akashic Records, there’s potential, but I’m banking on the fact that neither show’s strongest episode was its first. Unlike Akashic Records, there’s a stiltedness to the cast that exposes the fine line between ‘subtle, deliberate’ and just plain dull and tedious. So we’ll see.