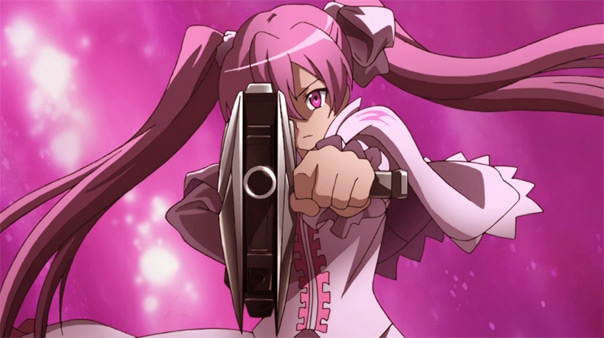 October is Breast Cancer Awareness Month. Is it mere coincidence that so many characters appearing in anime this month have pink (or pinkish) hair?

Well, actually yes…yes it is a coincidence.

But who cares! Let’s go down the rolls of eleven Fall 2014 characters who sport the somewhat unnatural but very visible hue atop their heads, in alphabetical order: 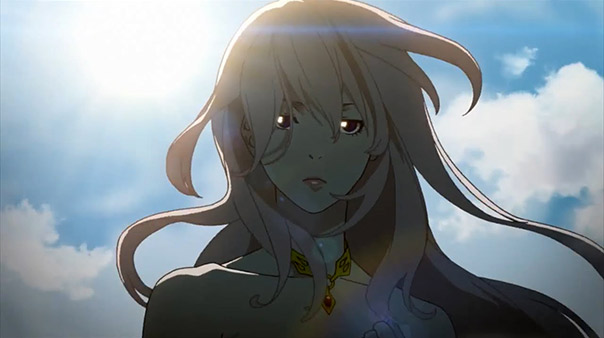 There are really two Amiras: the innocent, curious young woman (with pink hair) riding horses, imbibing and dancing for the first time…and the bad-ass demon warrior whom even hardened knights can only tickle with their magic. Her hair is also very very pale pink…though I wouldn’t call it strawberry blonde. 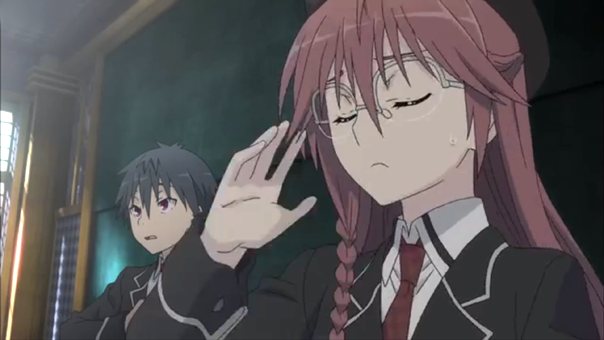 Lilith is a teacher at the Magic Academy, and introduces the protagonist Arata to the magic world. A bit of a prude, it’s nevertheless clear she likes Arata, as most of the other girls in the show do. I guess her hair is more rose than pink, but I’ll allow it. 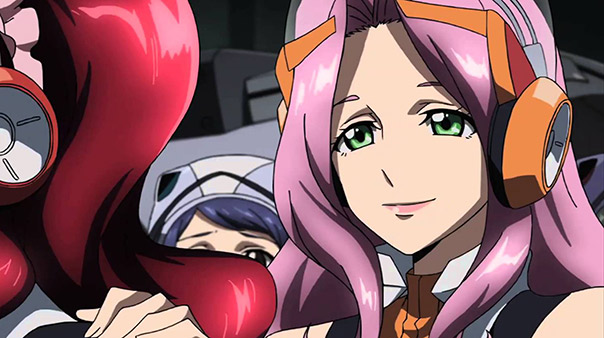 Also spelled “Elsha” in some places, We haven’t seen much of Ersha yet, but among the older First Troop pilots, she seems to be the nicest and friendliest, and doesn’t have any particular beef with Anget. Of course, who knows, she may tear Ange’s kidney out and eat it next week…the show could go that way. In any case, Ami is one of our favorite seiyus. 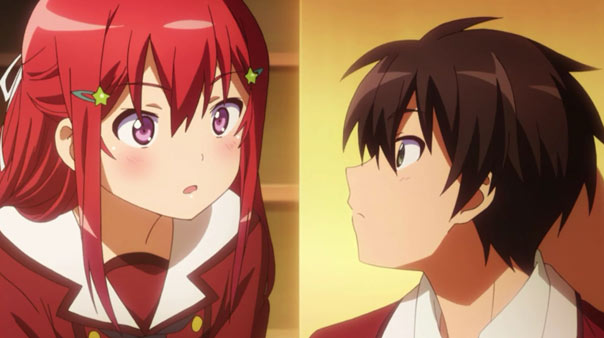 While she’s tended towards the common “I like the protagonist but will NEVER EVER admit it!” pattern so far, Tomoyo is still one of our favorite pinkhairs because of her playful, knowing chemistry with Jurai. Also, she can stop, slow, or speed up time. Sure, her hair is more crimson than pink, but according to Wikipedia, pink is really just a pale crimson! 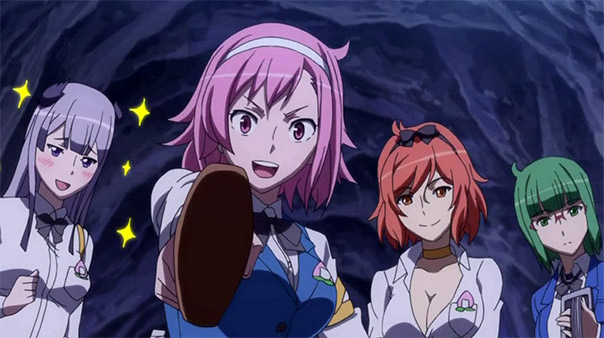 Momo is voiced by Touyama Nao, wears flip-flops instead of loafers or uwabaki, and duh, has pink hair. She also definitely wears panties. But seven episodes in, there are more questions than answers about her, like what she really is and where she comes from. But of all the girls Tenchi comes across, she’s the least hostile by far. 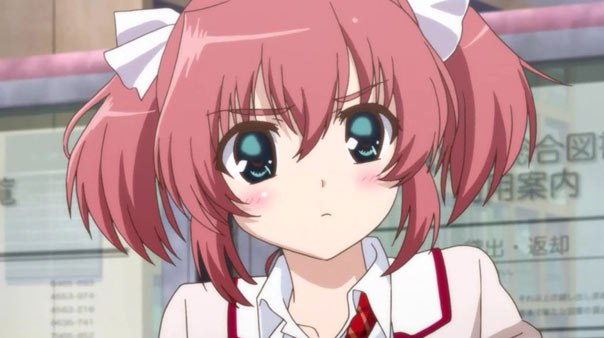 Another rosehead like Lilith whom we’re still including. We’ve only seen a little bit of her, but one thing we already like about her is the fact she’s voiced by Tanezaki Atsumi, who also voiced Lisa in Zankyou no Terror. She also seems to be orchestrating the creation of Kakei Kyoutarou’s harem. 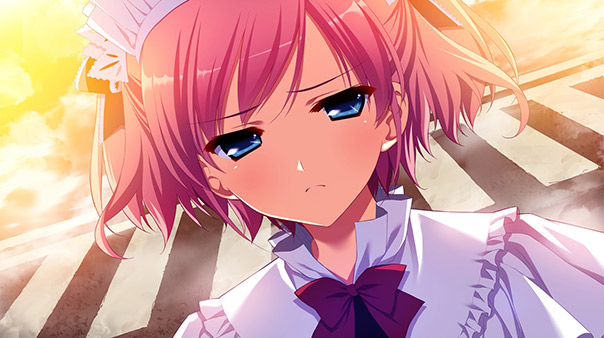 Sachi is almost always in a maid outfit, because friends say she looks good in it. She is also extremely eager to please and dedicated to satisfying demands. In other words, a “good girl.” 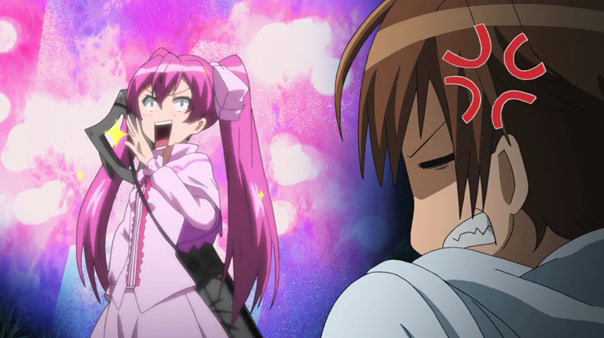 Mine’s story is pretty simple: she and her people had everything taken away from the empire, she has a big gun that become more powerful the bigger the pinch she’s in, she likes Tatsumi but would never let on, and she has very pink hair and clothes.

Unlike a couple other pinkhairs on this list, Noredo isn’t really interested in hiding the fact that she likes her man Bellri. But it doesn’t look like Bell likes her quite the same way, a point underscored when he seems suddenly smitten with new girl Aida, who has coral hair. “Noredo Nug” is also such a bad name it’s good. 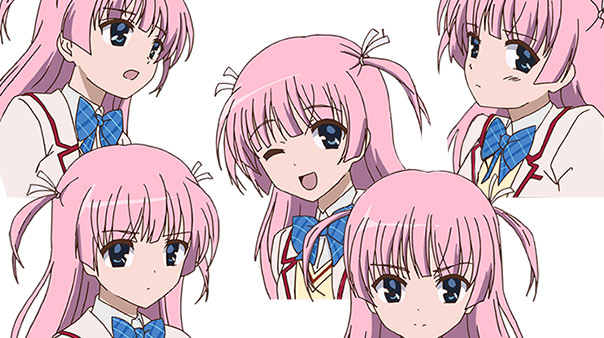 School radio host and friend (or past friend?) of Misono Senri. She has a cotton candy thing going on with her hair. 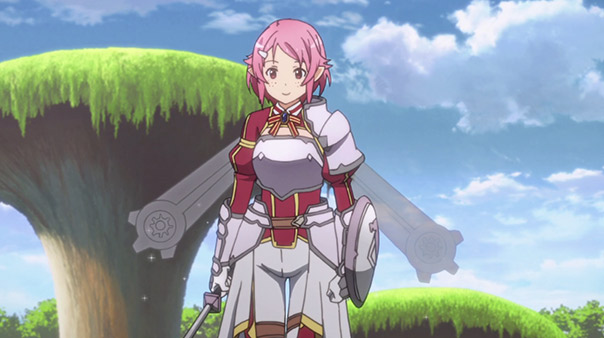 We probably shouldn’t count Rika for a couple reasons: she’s little more than a cameo in SAO II, and she only has pink hair when she’s “Lisbeth” in ALO. Still, here she is.

That’s all for now. Expect more lists of characters with similar traits in the near to distant future!