This week’s first half or so consists of watching the same day as last week, only from the perspective of Roxy. She and two of the Fangs of the Black Wolf are canvassing the town, looking for clues as to the location of Paul’s family. It’s always nice to spend time with Roxy! Alas, her fear of Superds leads her to inadvertently avoid Rudy and Eris, and she just misses Rudy as he’s dealing with his Demon Eye.

Roxy’s Dwarven traveling companion Talhand seems amicable enough…while Elinalise quickly demonstrates her love of group sex with brigands she met in an alley. Thankfully the episode doesn’t slut-shame Elina, who is instead portrayed as a tough-ass adventurer who knows what she wants. Instead she’s used as an extreme contrast to the extremely chaste Roxy and her storybook romantic ideals.

Rudy had similar storybook designs for his sea voyage with Eris, including being shipwrecked alone together on a remote island, gradually falling in love and starting a new life there. Alas, the ship doesn’t crash, but Eris does get horribly seasick. Thankfully (I seem to say that a lot with this show), Rudy keeps his hands to himself and merely helps reduce Eris’ discomfort with healing.

Of course, Rudy and Eris took one ship while Ruijerd was smuggled aboard another by Gallus. When they arrive in the new city (I believe the same one Roxy & Co. are headed next), Rudy is escorted to the smugglers’ hideout to pick Ruijerd up. There, he learns all manner of despicable things, including that among the smugglers’ “goods” are six beast children, one of whom is killed for crying too much. 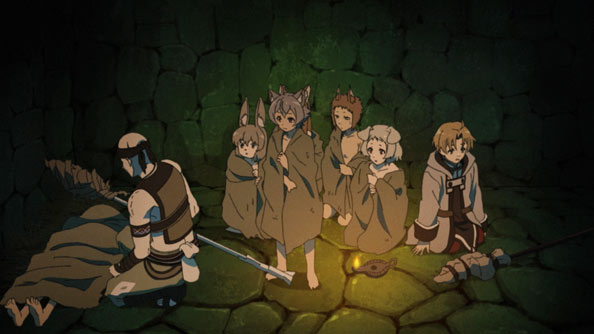 When Rudy meets him in his cell, Ruijerd tells him that in order to liberate the children, they’ll most likely have to kill all of the smugglers. But Rujerd isn’t worried about the reputation of Superds in this instance; he simply cannot abide these criminals hurting kids, and so tells Rudy he won’t have to dirty his hands. Most of the carnage occurs off-camera as Rudy locates and heals the children, who hiss at him at first, but as he can speak their language they decide trusting him is better than staying.

They’re all home free back on the surface when the kids mention the dog that was left behind. Rudy tells Ruijerd to watch the kids while he goes back to the dungeon. There, he frees a giant white dog that thanks him by pouncing on him and licking him. Rudy is luxuriating in the beast’s wonderfully fluffy fur when he’s interrupted by two demihuman warriors.

One of them heads to the city, following the children’s scent, while the younger of the two takes the giant dog and Rudy to their village, where Rudy will be given the “ultimate punishment” for the crime of “fondling the Sacret Beast”. Neither Rudy nor Roxy had much good luck this week, but even if he can’t clear things up with these tribal beast people, once their kids return home perhaps they’ll vouch for him.

Grand Blue finishes up with the club traveling to Miyakojima, which despite being part of Okinawa Prefecture is a 190-mile flight away from that island. The far-flung locale is not only home to the tradition of “Otori” (endless drinking) but some great diving spots, which the gang reaches by powerboat—only Iori can’t join the others since he missed his chance to get certified with Aina and Kouhei.

Chisa can see that Iori seems down and left out, and so stays behind on the third of three dives to cheer him up. Turns out he’s not that blue; he’s green from seasickness aboard the boat. Even so, the two have a nice time together.

That night, with the planned restaurant closed, Ryuu, Shinji, and their heavy-drinking compatriots set up an impromptu Otori, with everyone adding their chosen alcohol to a huge earthenware pot to share throughout the night. Iori and Kouhei aren’t really up to this level of drinking, but their senpais emphatically insist, and won’t allow them to dilute the concoction with water. 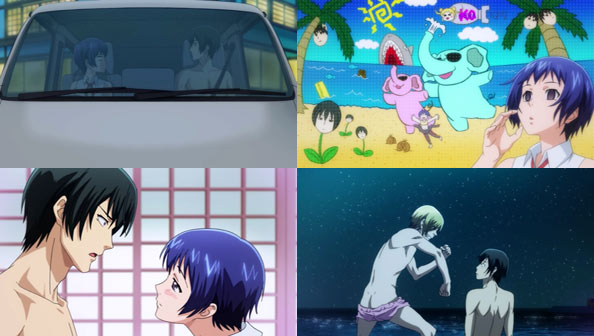 They soon run out of booze, and so the only non-buzzed member, Aina, heads out to buy more. She conscripts Iori to help her with the load, but he hops in the van wearing nothing but boxers, which even on the tropical island elicits a stop by the police.

Upon returning to the party Aina accidentally takes the wrong cup from Azusa and downs it in one gulp. Turns out it’s the near-lethal Otori Juice, and she instantly becomes tanked, losing her inhibitions and going after Iori and Kouhei’s boxers. 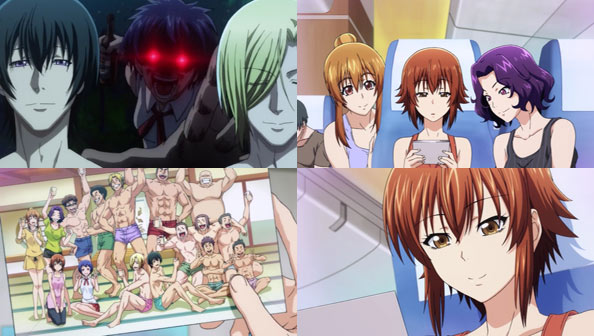 While briefly escaping her clutches, Kouhei curses Iori for tricking him into joining the club, but Iori points out to him that by joining he actually got what he wanted: a fun, exciting, almost dream-like first year of college. Just before Aina leaps out from the darkness Kouhei considers it more of a nightmare.

With that, the gang heads back home, passing the time looking at photos of their time in Miyakojima, which bring smiles to all, even Chisa, for whom the antics of Iori, Kouhei & Co. have warmed to her somewhat. It’s as good a place to end as any; Grand Blue was in danger of too often repeating its themes without sufficient development of relationships to justify more episodes.

Ultimately, while the actual diving scenes were certainly beautiful and aspirational, they weren’t the most numerous, and always took a backseat to the drinking, arguing, and weird, exaggerated distorted closeups of peoples’ faces. It wasn’t without its share of laughs and heartwarming moments, including Chisa’s final smile.

The girls are understandably excited to be shoving off for their great life-changing expedition, but not a one of them, even Shirase, really gave much thought to how life would be aboard an icebreaker at sea.

Of course, none of them have any experience being on ships period, so that’s to be expected. And at first, things don’t seem that bad: sure, they’re four to a room, and they’re almost immediately put to work peeling potatoes and the like, but it’s not that bad!

Then the crew is invited to go topside for exercise, and the girls learn just how much toughening they’ll need to function aboard ship. Between the drudgery below and the training above, wasting even small amounts of time (and they waste a lot in the bath) is like digging a hole of lost time from which they’ll never return.

As if settling into an efficient routine in which not a moment in the day is wasted (or night, as they need good sleep to be ready for the day) wasn’t enough on their plate, their anti-seasickness medicine wears off, and once they’re on the high seas, that becomes a devastating problem for the entire quartet. 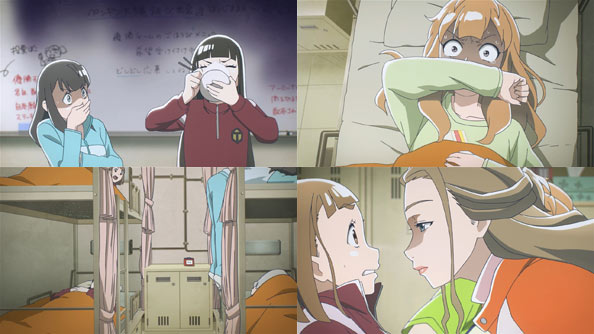 Okay, I told myself, now they’re going to start to feel the challenge they set for themselves when they agreed to do this. And they do, the poor wretches…they do. They lie in bed, unable to sleep, unable to keep down the food they have to try to keep down, dealing with the unceasing rolling of the ship as they sail further south, where there’s nothing stopping the currents.

This is all great stuff, both pre- and post-seasickness. It never feels like the girls are being tortured, because the whole time they’re enduring all these problems, the rest of the crew, far more experienced as they are, seem completely unaffected by the changing conditions. They are a constant reminder that while it may be tough now, given enough time and perseverance, the girls will get through this. 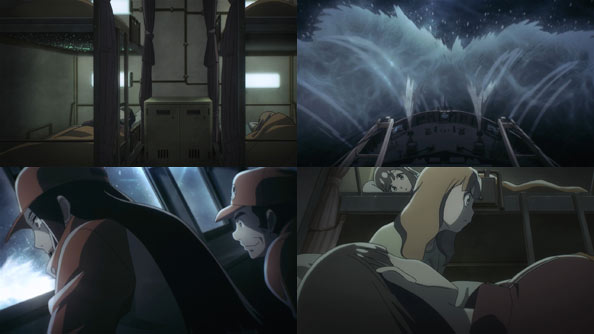 Heck, when the ship starts hitting some really serious waves, Gin shows her “old salt” side, like the captains of the age of sail, standing on the deck of their ships, fighting with the ocean as if it were an opponent in the boxing ring. She’s ready to take some licks, but she’s not going to be counted out.

Similar sentiments come to Shirase as the four lie in their bunks, miserable and exhausted. Gin and the crew may seem like a “different kind of organism” as Yuzu puts it, but all the girls can do is their best; they have no choice. Mari corrects them: they did have a choice, and it was to do exactly what they’re doing. (Hinata seems inspired by Mari’s words, but in truth she just has to use the toilet).

Before heading back to their bunks, the four open a hatch to take a look outside…which seemed like an extraordinarly bad and reckless thing to do considering how little experience they have being on the deck of a ship during such severe conditions. But they all manage to hold on, and even revel at getting pummeled by the waves crashing over them.

The experience changes them for the better; the next day when things calm down they have their sea legs and are full of energy. A big part of the transition is a matter of one’s state of mind; one’s attitude. Mari knows that no matter how tough or harrowing things might seem in the moment, she knows they’ll all look back on these times as some of the most fun and exciting of their lives.

And things are only going to get more exciting, and harrowing, and possibly miserable and painful and terrifying, as icebergs start coming into view on the horizon. This episode does something truly clever: depict how hard it is to adjust to life on a boat, all the while implying that a boat is nothing compared to Antarctica.