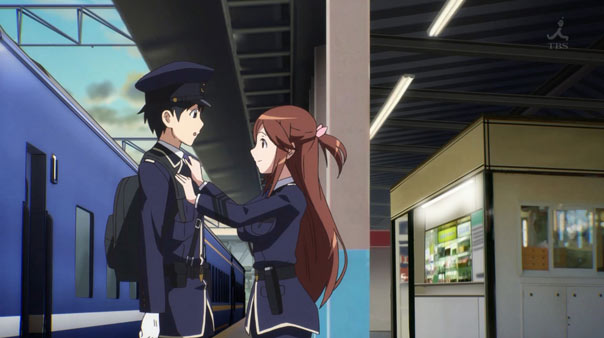 Rail Wars! was never going to win any awards, but it was, for me at least, a consistent source of entertainment, but also offered something unique and quirky in its extensive train-lore. With the royal assassination attempt arc resolved, the show is free to sit back and relax a little with an episode that nicely encapsulates many aspects of its run.

For one thing, Takayama Naoto has always been passionate about trains to the point of good-natured meddlesomeness. Even aboard a train where he has no jurisdiction, he can’t help but want to help when he spots a little hiccup of trouble. Nothing severe like no brakes, mind you, just things that would mar an ideal train ride. But also, he just can’t seem to sit still on a train, and Iida is swept along with him. 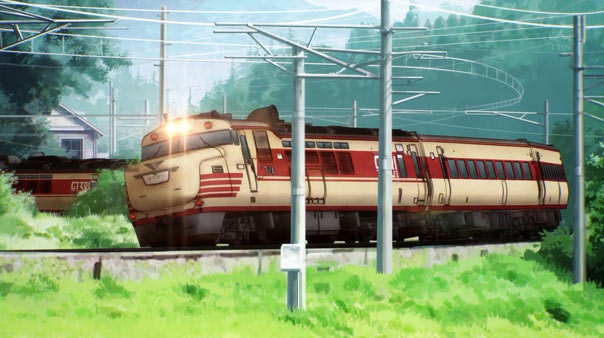 Having Iida as his companion for most of the episode was an interesting move that I agree with for the last episode. The flirty Iida has never shown to have a serious romantic interest in Naoto whether due to age or her status as his superior, or because she’s just not interested in him in that way. That doesn’t change here, but Iida still admires Naoto as he jumps from one problem to the next. 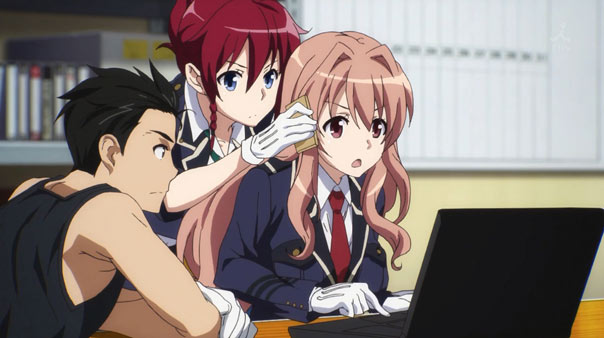 We still get a fair share of all the girls who are into Naoto, but because they’re back at D4 headquarters, the episode can focus more on the minutiae of simply enjoying a long train ride, but also have Naoto solve a few more problems without it involving intimate contact with Aoi or Koumi. He does borrow Iida’s still-warm panyhose, and she presses against him once or twice, but these incidents are pretty inconsequential. Most of the time, the trip was less rom-com, more slice-of-(train)life. 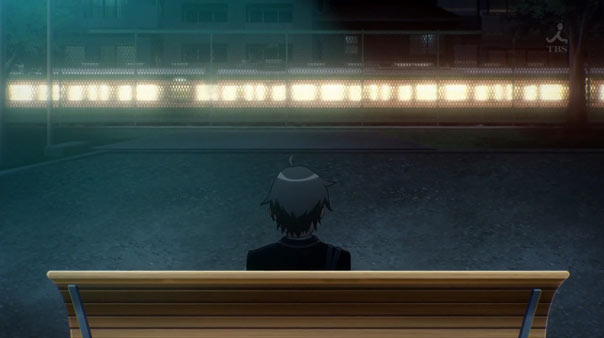 But Naoto doesn’t fix everything by himself. He’s become much stronger thanks to the combined talents of the rest of his D4 team, including Iida, and he’s cognizant of that while acknowledging he’s very much the center of attention at the surprise get-together in his room. The harem situation isn’t resolved (nor should it have) and everyone raises their drinks to Naoto, “The Womanizer.” 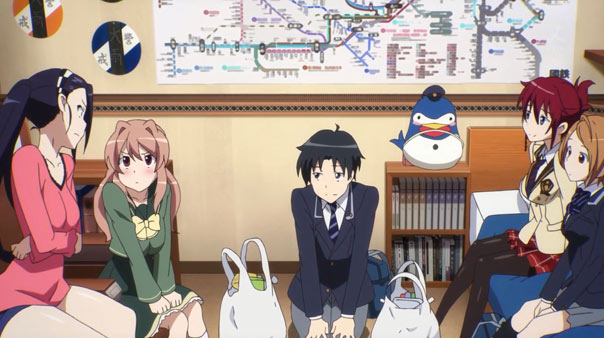 We really only hate it when a guy is liked by many gals without a good explanation, but it was always clear here (he’s bright, kind, and brave when he needs to be), so it wasn’t that bad, though we remain Naoto/Aoi shippers to the last. The show also made every one of the trains it featured characters in and of themselves, and the impressive gas turbine-powered KiHa 381 “Bulldog” was a fitting final “guest star.” 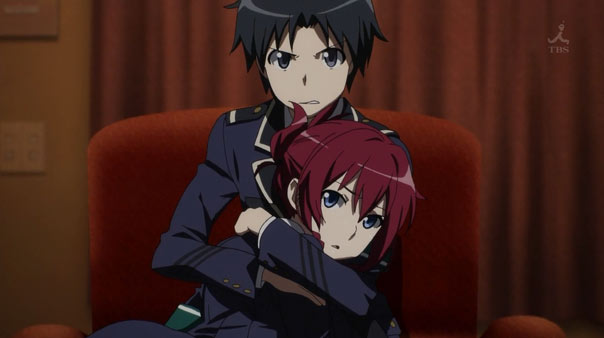 A good action story rule of thumb is that things are always more exciting on a speeding train. A train job is more exciting than a bank job; a bank train job would be the ultimate. Heck, a train shower is better than a shower in some lame stationary structure. Rail Wars! instinctively understands and capitalizes on this fact in its penultimate episode. 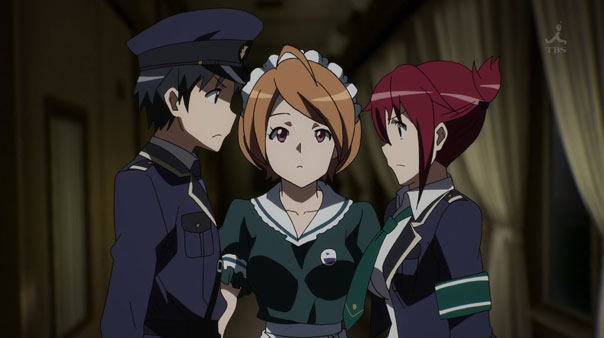 Like the draisine miniarc, the characters are almost constantly on a speeding train here, which lends a lot more adrenaline and momentum. Prince Bernina doesn’t take up a lot of time here, as she’s whisked off to safety by Iida after D4 successfully fends off the thugs and captures two of them in a team effort (and thanks to that really weak taser). With the guest star out of the way, we can focus on the regulars; a focus I favor, especially so close to the end of the run. 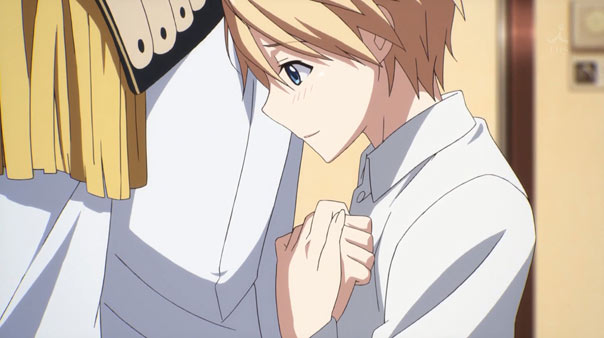 When the other thugs take Haruka hostage and tell them they’ll exchange her for the prince, Naoto dresses up as the prince. It’s a gambit that doesn’t work a moment longer than it needs to for D4’s heavies—Aoi and Shou—to do what they do. It gets a bit hairy, but in the end the bad guys are vanquished and Haruka is safe and sound. Unfortunately, the train’s controls are also vanquished, thanks to all the gunfire. 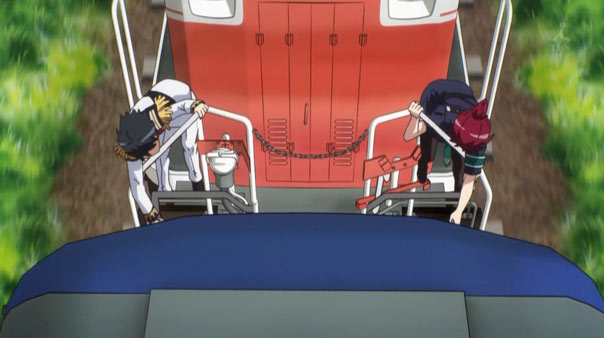 That’s what’s so great about employing trains in an action scenario: it ain’t over till the train is successfully stopped. Naoto does the brave thing: deciding to disconnect the engines so the cars behind will slow and eventually stop on their own. Not wanting him to steal all the glory, Aoi stays with him to decouple, but she later reveals the shootout left her wounded. But when Naoto has his chance to jump off, he stays right there with Aoi. 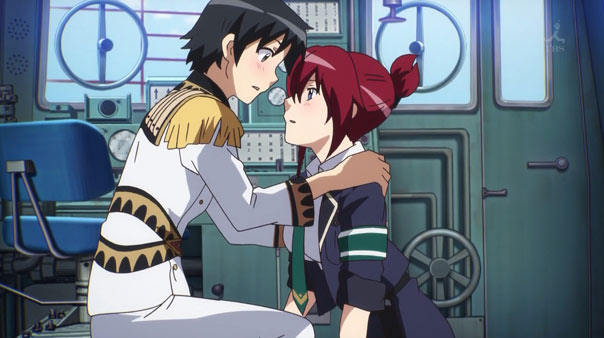 He says it’s because he was scared, but let’s be real: he’s not the kind of person to save himself and leave someone behind, especially Aoi. He tenderly dresses her wound, and catches her in his arms when the track turns, and for maybe the first time, Aoi looks like she’s finally going to confess. Hey, if they’re about to die, why not? 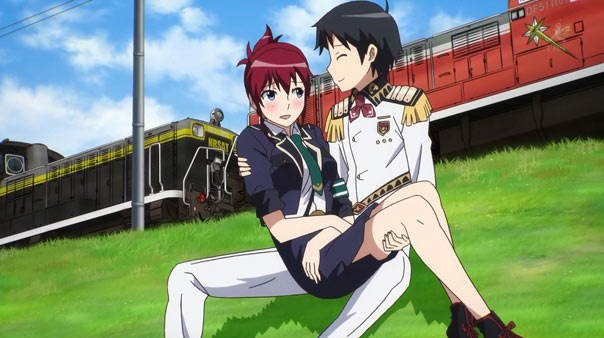 Alas, the cavalry interrupts their lovey-dovey moment, but what a cavalry: three DF51s in tandem going down the up line! RW has had a huge wealth of equipment to work with throughout its run, and has always been adept at breaking out the big toys when the situation warrants it. Fittingly, the episode ends with Naoto, looking every bit the shining prince, gallantly carrying Aoi off the train, to reunite with their colleagues. 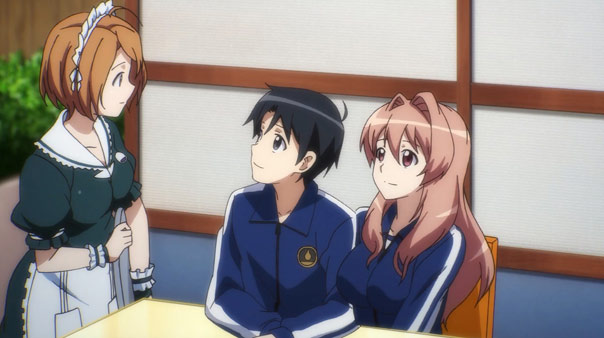 Things could scarcely get worse than last week’s fiasco, so this week I reveled in the fact the episode was at least partially about actual trains and advanced training, as well as the fact no one was acting like a crazy person.

Sure, a (simulated) train is derailed, there’s a pointless bath scene, and we get perhaps far more Haruka camel toe than we needed, but at least she’s not running around naked while Aoi fires wildly across city streets. More than anything though, by the end of this episode it’s clear the show has laid the tracks for a Naoto-centered harem of generous proportions, and that’s exactly what we get. 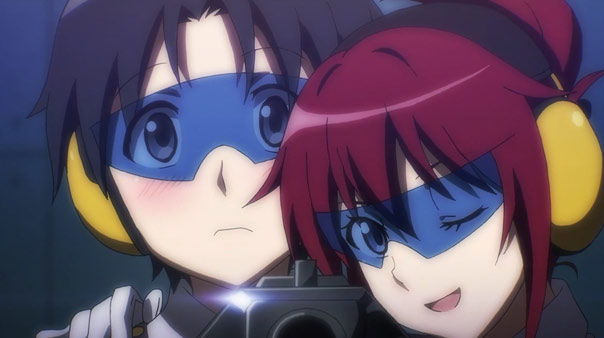 Mind you, it’s not terrible. Naoto may have some weak qualities about him, but I’m not going to sit here and say he doesn’t deserve the affection of any individual girl who is presently pursuing him at this time, be it Aoi, Mari, Haruka, or Aoi (he’s had the most time and contact with the latter). But to all go after him at once…it’s just a little exhausting. 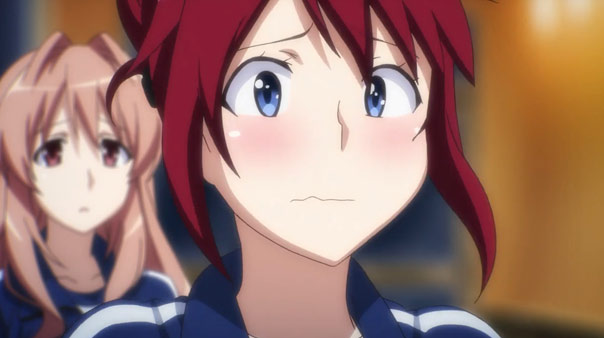 However, I do like how it affects their training. During the Usui Pass simulator run, which D4 thinks is the real thing, Aoi is upset about Naoto saying he wants to be a driver, which is another way of saying “I don’t want to be a public safety officer”, which she interprets as “I don’t want to be with you; you smell.” So she’s understandably upset, and they don’t go over anything before they set off with her in the rear locomotive and Naoto up front.

Because they never worked out the signals, Aoi increases speed when he signals for brakes, and I guess she’s either unwilling or unable to use the phone Shou and Haruka use to keep in contact with Naoto. So they end up derailing magnificently. If it were a real train, that would have been more than enough for them to wash out of the JNR entirely. 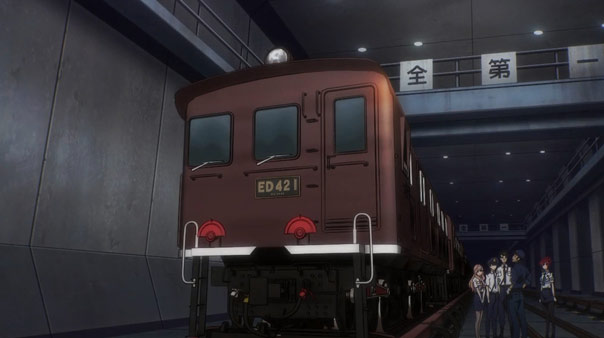 It’s kind of a perfect storm of Naoto being coy about being a driver because he doesn’t want to upset Aoi, while Aoi lets herself be blissfully unaware that Naoto might want to be a driver, despite the fact he’s constantly geeking out about the engines. It all blows up in their faces, and then they blow up a train, which is thankfully fake, but they’ll have to work that much harder to gain back the trust of their instructor.

As for why Naoto wants to be a driver (beyond loving the engines), that’s a bit thin. I’m not sure how he ended up by a mountain railway “starving and alone out in the cold”, yet he has a camera and tripod. Were his parents that neglectful? Also, he wants to be a driver to “cherish lives”…but isn’t that more a public safety officer’s job? How often is he realistically going to have to pull his train over to rescue urchins? 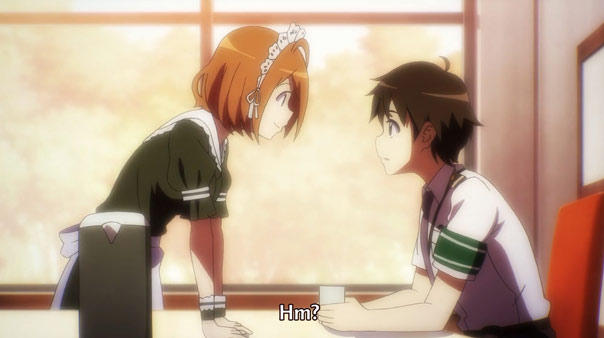 In any case, Naoto still isn’t quite sure what he should do, but his good friend (who wouldn’t mind being more, natch) Mari is there to cheer him up, while Aoi slips an apology in his door. And then, the next day, we have this huge harem explosion, with Iida ordering Naoto to a chapel in the woods, Aoi meets him there, Haruka shows up feeling betrayed, and then Noa pops out of the confession booth. 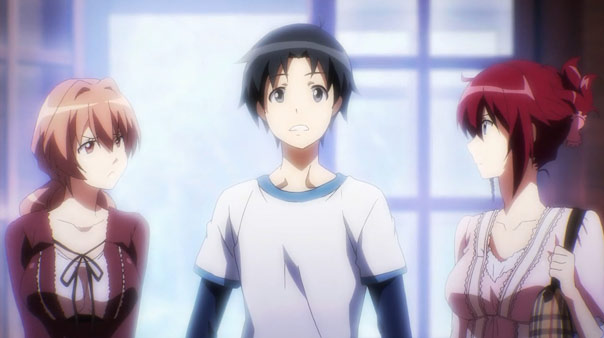 I was kind of hoping Naoto would eventually settle down with someone—Aoi (holy crap she’s adorbs at the end of this episode) or Mari, preferably—but that’s looking far less likely, unless he gathers the agency to sort through all these girls and pick the one he wants, a task arduous enough to be deemed the Usui Pass of character development. With all that pushing and pulling, things can go off the rails fast. 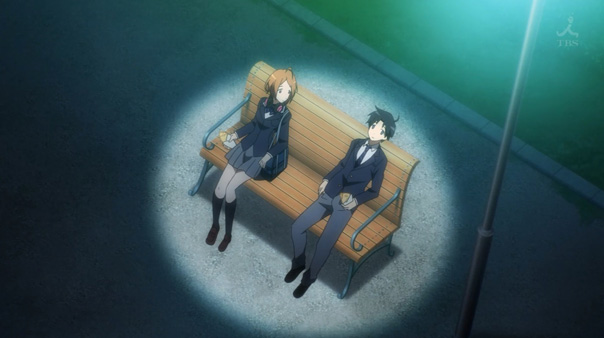 The literal cold open with two unidentified young girls crouch in the snow and record the sounds of an oncoming train, an obvious hobby, is an enticing way to start the episode. Turns out of those girls is Sasshou Mari, a former classmate of Takayama’s who’s joining the OJT. 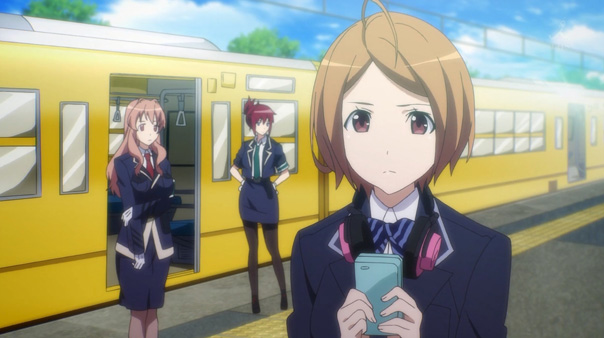 It looks like a relatively quiet week for Defense 4, with Koumi bailing out Takayama with her decent English skills and Sakurai having to hand-write and apology for using excessive force on an alleged perp (glad that last part, and Sakurai’s general ruthlessness, is still in force here). But Sasshou provides them their latest “mission” when she reports her friend Kaori is missing. 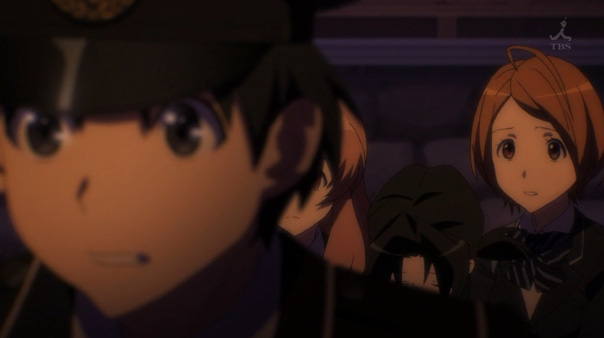 With that…it’s time to hit the binders of incident reports, illustrating just how diligent and detail-oriented the operation is; but there’s nothing in them on Kaori. When Kaori’s phone shows up at the lost-and-found, Sasshou’s super-sensitive ears are able to pore over the last sound recording on the phone’s memory and identify the quayside station where she was abducted. 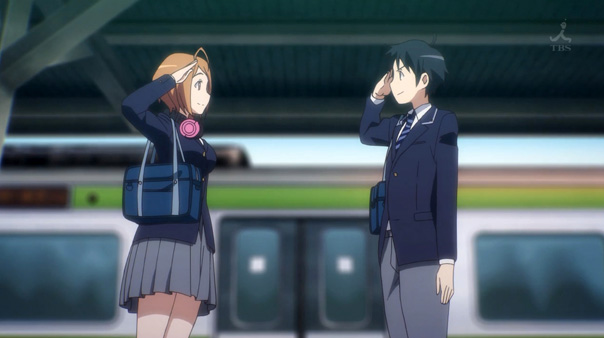 From there, Defense 4 conduct a thorough search of the station’s environs, finding a bound and gagged Kaori in a dark warehouse. When the drug dealing gangsters who captured her return, The Railway Public Safety Crew is ready for them with extended batons. Unfortunately the battle isn’t shown, but Takayama apparently doesn’t embarrass himself in it, as Sasshou proclaims he was “cool back there” when it’s all over. 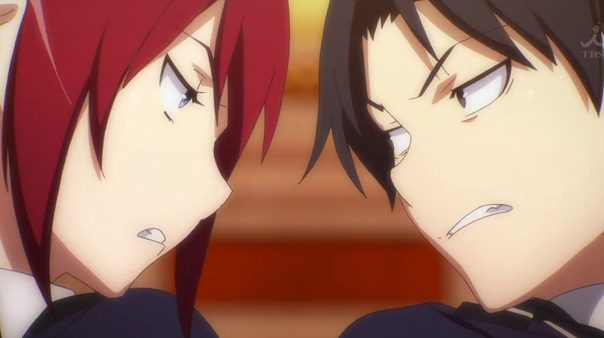 And when this episode is all over what we had was, again, a scenario in which the unique skill sets of certain characters prove decisive in winning the day, from Koumi’s English to Sasshou’s ears. I also enjoyed the pleasant chemistry and subtle flirting between Takayama and Sasshou that overshadowed whatever lingering passion Takayama and Sakurai still bore from last week’s crisis.