Brynhildr continues to suffer from a highly erratic tone that shifts jarringly from one scene to the next, to the point where it even seems to be confusing the characters. To whit: Ryouta stabs Saori in the heart like it’s the most natural thing in the world for an ordinary high school student to do. After Saori hangs up and is ejected, turning into a mass of organic goop, revealing a horrifying-looking parasite, only then does Ryouta react viscerally, stomping it out like a bug. 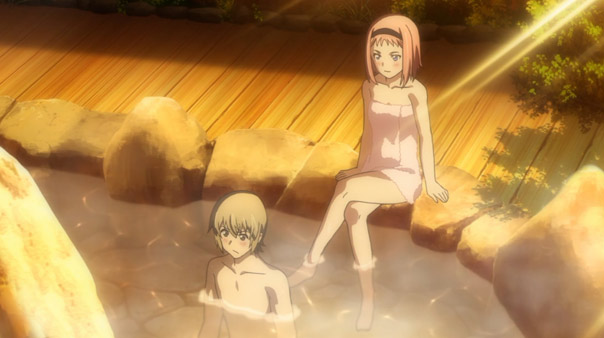 Ryouta has gotten mixed up in some extremely awful, bloody, amoral, supernatural shit…but aside from that one little yelp, he doesn’t seem the least bit traumatized by what he’s seen and done. The episode’s attempts to lighten the mood with some fanservice-laced mixed onsen nonsense and domestic issues fail, because the gap between the two moods is too wide. The show yanked me from unspeakable horrors to oppai-grabs with whiplash-inducing speed.

Mix two tones on the exact opposite moods too carelessly, and they’ll compromise each other, resulting in an impotent neutral mood, or just outright confusion. As it stands, it feels like two different shows in one, both of which would be better if the opposing tone was removed. I’m more interested in Ryouta’s resolute leap into the dark, messed-up world of the lab girls, not a half-assed high school harem. Here’s hoping new addition Takatori, an AA+ witch sent to eliminate the others, steers things more towards the former.

One thing you have to hand with Brynhildr: it’s not laying the peril on thin. The present situation of Neko and Hana on the run escalates into a crisis when Ryouta learns they need to take a “death suppressant” pill every day or they’ll die horrible deaths, and they only have five days of pills left. Then the crisis escalates into disaster when Neko leaves a pot of boiling water unattended for ten seconds and burns up their supply.

Just like that the five days are pared down to one, and then even less than that when Hana starts to bleed, having gone almost a full day since her last pill. The overarching mission, then, which provides this episode with thrust, is clear: find more pills, or the girls die. Ryouta, having already forfeited his life by getting involved, decides to take it upon himself to find a way to make it happen. Our main gripe with the plan is that the pills the girls need are commercially produced, rather than a top-secret proprietary drug formulated by the lab.

Then again, the evil guys in white coats at the lab may be morally bankrupt butchers, but they’re butchers with scientific backgrounds, so it’s not totally ridiculous the drug would have a code Ryouta could memorize. That tiny code is the single clue that gives them any chance at all, and also reveals that Ryouta is the opposite of Neko in that he’s able to remember everything, even the things he’d rather forget. 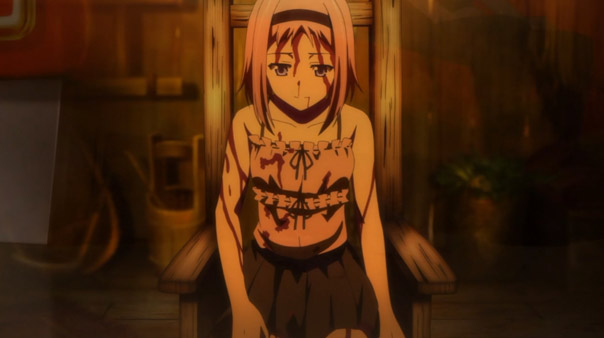 Neko, meanwhile, loses memories when she uses magic, even those she wants to remember. This proves important when a conveniently-placed slash by Saori (another, far higher-level witch sent by the lab to kill her) reveals that Neko has the same moles as Kuroneko after all, they’d just shifted to her boobs once she grew some. It isn’t as if I thought they weren’t the same person all along—why beat around the bush?—but this seems to confirm it for certain. 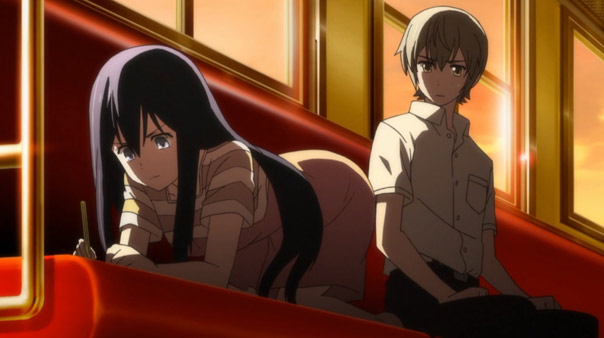 Seeing those moles fills Ryouta with joy that his friend is still alive, but now he knows why she doesn’t remember him. If only he could give her some of his ability to remember, he could help her, but I’m not sure the rules of this show work this way. Then there’s the fact that his joy is immediately stomped out when Saori slices Neko into several pieces. Again, the show doesn’t hold back in tormenting its characters and kicking them while they’re down.

I assume all this torture is meant to toughen them; if they can survive this, then they stand a chance against the lab. All the girls sport “hahnests” (…harnesses?) on their necks with three switches: one prevents them from using magic for a day, one terminates them (last week’s WTF moment), and the third does…something else; something “worse than death”. Ryouta’s hoping that something else is the key to saving Neko

Kyousuke pretends to be Kirino’s boyfriend to convince a modeling agency that she can’t go abroad. It seems to work, but when Kyousuke suggests they go out on a date the next day, they must follow through. After the date, Kirino insinuates she has a real boyfriend, worrying Kyousuke. Ruri tells him she wouldn’t mind if Kirino did. Kyousuke, Kirino and Saori and Ruri go to the Summer Comiket, and they sell out the Maschera doujinshi they made together. While watching a Meruru movie, Kirino is confronted by a young man.

Both Kyousuke and Kirino would prefer to keep everything about their relationship left unsaid between them, whenever possible. The truth is they both care for one another deeply, but neither wants the other to come right out and admit it. When Kirino has said nice things about her brother, it certainly wasn’t when he was present. So when they have to pretend to be a convincing couple (for a pretty flimsy reason, frankly) and they’re asked why they love one another, they’re actually open and honest about it, because they feel they have to be.

That was sweet, and the date is more fun than we thought it would be, but where this episode really shines is pretty much whenever Ruri is on the screen. From her reaction to seeing the “happy couple”, to her unexpected appearance in normal clothes (a Menma-like white dress), to the resumption of talking and having fun with Kyousuke, Ruri proves yet again why she’s our favorite character. That Kirino has a boyfriend neither surprises nor bothers us like it does Kyousuke, because that will just mean he can spend more time with the lovely “Shironeko”.

With only one rusty tank in the garage, the newly-assembled Tankery class must search for four more, which they find in a forest, on a cliff, under a pond, and in a warehouse. They clean the tanks up and await their instructor, Chouno Ami, who drops from the sky in an airlifted tank. A mock battle is commenced, in which the five teams must get their tanks into starting position. The last tank mobile will win. While escaping a pincer attack, Miho’s team nearly runs over the perpetually sleepy Reizei.

This show continues delivering what the title promises: Girls and tanks. More girls than tanks: by our count, there are twenty-four characters: the main group with Miho, the four other teams, Miho’s sister Maho, and the instructor Ami. (No guys!) We’re not even going to try connecting a face with a name – especially since not everyone is given one! – but we’re now reasonably familiar with Miho’s group: Hana, Saori, Yukari, and Reizei.

We like how this episode wastes no time getting the girls in tanks, even if they’re old, rusty museum pieces, and the girls don’t know how to operate them. For what it’s worth, they’re really cool tanks. We’re also a little fuzzy on details like the nature of the ordinance: you’d think live ammo would certainly result in some fatalities, especially when most of the tank operators don’t know what they’re doing. Ah well, we’re sure  they’ll be fine. We wish we had the opportunity to operate tanks in high school.

Car Cameo: We caught a glimpse of a Daihatsu Materia and Nissan Silvia, but most prominent is the school principal’s Ferrari F40 – one of only 1,315 ever built – which is utterly wasted by Instructor Chouno’s tank-drop. A sad day.

With this final web extra, Oreimo finally comes to a close on a happy note. Disturbed by a cryptic text from Kirino, Kyou totally brushes off a confession from Kuroneko (bastard) and dashes off to L.A. It’s a bit of a shame they don’t spend any time in America at all; he just takes a cab to her dorm, they play an eroge (her first since she arrived) and with a tearful confession of his own, convinces her to come back to Japan.

Kyou must’ve sensed the same thing his father did from those texts: she wasn’t doing to hot, and was going to proceed to keep working hard, perhaps too hard, to reach her goal of becoming a track star. Basically, it wasn’t working out. She swore she wouldn’t contact anyone back home until she beat another runner: three months later and no texts, save the ones instructing Kyou and her dad to toss her collection and trophies, respectively.

While Kyou kinda had to go and snap her out of her stubbornness, it’s still a bit disconcerting he so casually shot down Ruri, especially after her unprecedented spilling of her honest feelings. He made her happy caring for her. But this is a show where the imouto is the star, unfortunately for Ruri. So rather than be happy with an Ayase or Saori or Tamura or Ruri as his girlfriend, Kyou continues to live his life in service of others. He derives his happiness from making others happy. Pfft…what a weirdo! Rating: 3.5