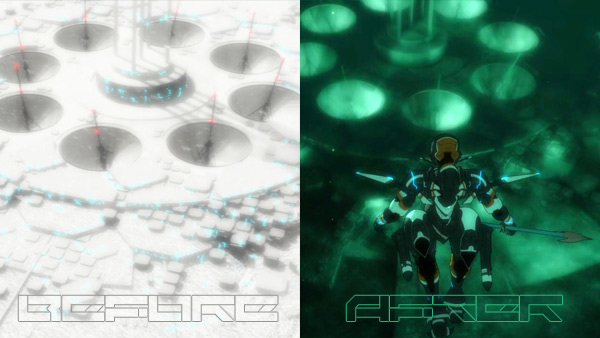 Pinion prepares a salvage operation at an ancient facility, as Ledo leads the attack to drive the Hideauze away. He enters a massive underwater facility that is a Hideauze nest, and commences destroying every enemy he sees, until he finds ancient data storage discs, which reveal that the Hideauze were created from and by humans back when Earth in the midst of an ice age and plans for humans to abandon earth were accelerated. Chamber tells Ledo not to believe the data, and then proceeds to destroy a human-like Hideauze that swims by.

This week Ledo dives deep into the realm of Earth Hideauze, and further into his ingrained vendetta towards them. Even when Chamber warns him they’re running low on energy, Ledo presses the attack. And he ends up in so deep, he discovers something that turns his whole situation on its head. The conveniently-edited, informative video paints the Hidauze as derived from humans who underwent biotechnological experiments, and what’s more, Earth was split into two factions: those who were for this “evolving”, and powers like the Continental Union who weren’t. It could be that Ledo was fighting an extension of that war, however many years in the future.

The video of a world steadily being buried in snow is chilling (no pun intended) and shows that desperate humans will take desperate measures to ensure their safety, including the ability to live and breath in the ocean and in the vacuum of space. It’s also pretty chilling that this info was classified and kept from grunts like Ledo (though his successful effort to order Chamber to de-classify it was a nice bit of work.) Citing protocol isn’t the only card Chamber plays: unlike Ledo, he’s devoid of emotion, and the enemy is the enemy even if they’re not the mindless low-level lifeforms Ledo believed them to be until now. Prior to the revelation the episode was not shy showing Ledo and Chamber annihilating them with extreme prejudice. Now he must feel like a mass murderer.