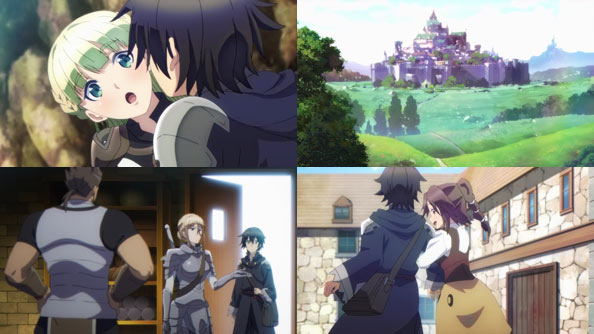 The battlemage whom Satoo saves is one Zena Marientail, who calls off her suspicious comrades and gives Satoo a ride to their mutual destination, Salue City, a lovely walled and terraced town with friendly faces and reputable businesses.

After securing proper papers (denoting him as Lv.1 despite his much higher level), he is snagged by Martha, the daughter of the keeper of the Gate Inn, where Zena’s comrade Iona recommended. Throughout these interactions, Satoo utilizes trickery, persuasion, bartering, and other skills he’s amassed.

The innkeeper tells him about a Demon King that a chosen Hero must defeat, but Satoo settles for some cold quiche and cabbage to sate his hunger. I for one have always lamented the fact one cannot taste all the different foods one finds in an RPG; watching Satoo enjoy it is the next best thing.

While Martha shows him around, Satoo learns about the strict caste system; commoners cannot use the public baths, and there are a good number of slaves, many of them demi-humans whom the other humans fear, distrust, and in some cases outright hate. When Satoo is nice to a couple of young demis, Martha seems confused, but quickly changes gears to other things.

Upon returning to the inn, Satoo happens to spot Arisa—who bears the inauspicious titles “Exiled Witch” and “Crazy Princess”—being ridden on a cart, presumably with other slaves. I’m sure he’ll see her again, but first, he has a hearty supper of veggie soup, wild boar, black bread and mead, which proves so tasty he has seconds against his better judgment.

As he tosses in bed with an upset stomach, he ponders his situation, and concludes it might not actually be a dream, but…something else. After all, the “game” he’s seen so far doesn’t really match any games he knows of or has helped to develop; rather it’s something unique.

As he rushes out into the night to explore the city some more—it’s very pretty at night—he decides that whatever is going on, it behooves him to soak up as much as he can, that he might become a better game developer by what he sees, hears, and experiences in this fantasy world.

I don’t really blame him; he’s flush with cash and overpowered to boot. I wonder how he’d fare right now against that Demon King. Of course, he’s nowhere close to encountering such an overboss; instead, he gets a surprise visit from Zena, who has come on her day off to thank him for saving her life by spending the day with him.

Desumachi continues to be nothing groundbreaking, but I cannot deny it scratches an itch; that of a fantasy slice-of-life that takes its time unveiling its world and not skimping on the details, be it currency, society, cuisine, and relationships. Basically, it’s comfily low-stakes and entertaining enough to keep watching for now, though my socks remain firmly un-knocked-off.