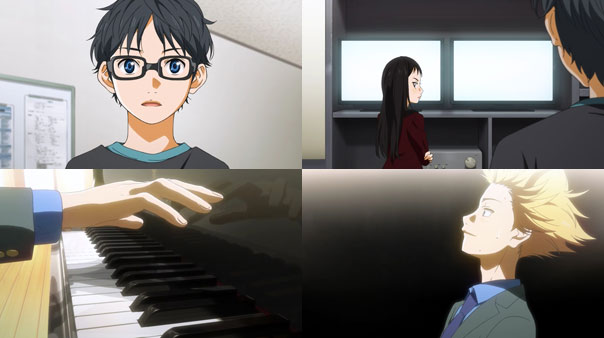 My goal isn’t to go overseas, or to play in the Chopin competition. My goal is Arima Kousei.

Aiza’s instructor Takayanagi bristles when he says this — Kousei never shows up, and Aiza’s ready for bigger better venues — but he understands well where Aiza is coming from. Kousei is what has driven Aiza to work tirelessly to catch up to and even surpass Kousei. Kousei is a rival, and squaring off with a rival, even if Kousei is neither present or aware of that rivalry, has made him grow faster than any teaching Takayanagi could have done.

A strong will enabling him to stand up to his fears. An unswerving fortitude at his core.

Aiza Takeshi possesses these things, but he must first throw up before the performance, and he’s almost giddy with relief when it’s over; his hands tremble afterwards. But when seated at the piano, remembering Kousei is here, today, and watching him, is all the motivation he needs to turn out a brilliant, crowd-hooking performance that puts everyone before him to shame. 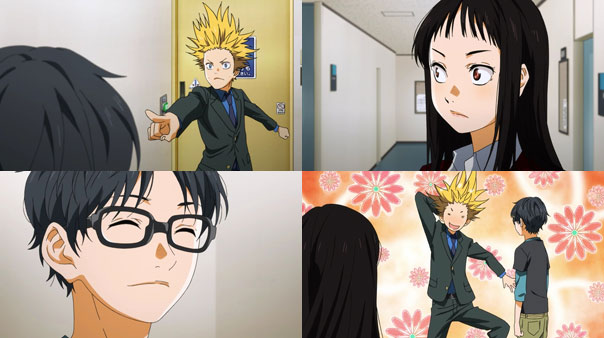 Kousei does watch (from monitors in the waiting room with Emi, who makes it clear to Kousei that Takeshi is here, and he played as wonderfully as he did, because of him. When Kousei asks if she feels the same way about him, she tells him not to make her laugh, but she’s not being honest with Kousei. Takeshi, on the other hand, is super-stoked by Kousei’s praise. It’s not so much that he knows he beat Kousei or even caught up to him; the fact that he moved him is the most important thing. 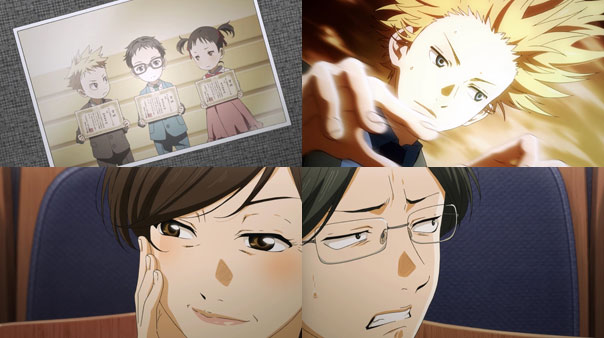 Now that he’s admired Kaori in a similar way, Kousei understands a little more about the influence his mere existence had over Takeshi and Emi since they were little squirts. Meanwhile, Takayanagi is glad he indulged his student’s desire to face his rival; so glad, in fact, he gloats about how good he was to Emi’s instructor Ochiai, and remarks how far Emi has fallen recently and how she has no chance against the performance they just witnessed. 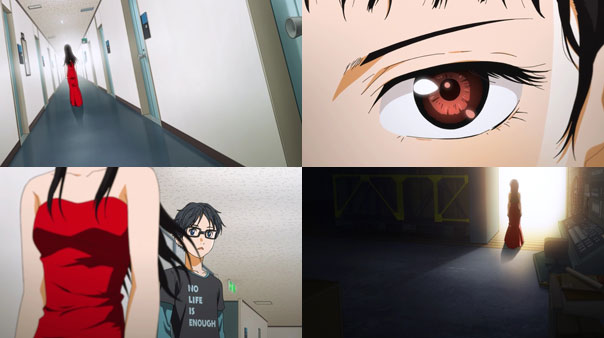 Frankly, I myself was a little skeptical it could be topped, but that was me being a FOOL, as Takayanagi was being. While he carelessly threw down the gauntlet, Ochiai accepts his challenge. It’s true: Emi can be erratic and hard to motivate, and the littlest thing in the world could throw her off her game. But things are different today. She has all the motivation she needs: Kousei. 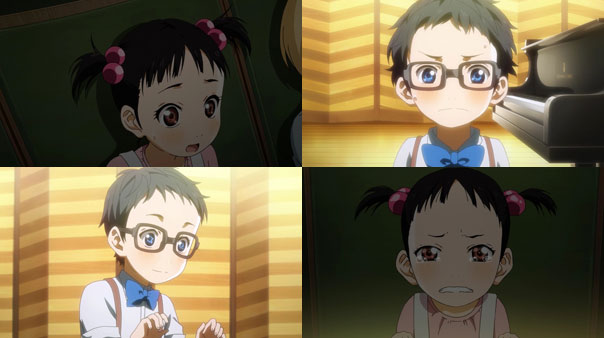 Emi plays her cards close in her dealings with Kousei this week, but when she takes the stage, there can be no doubt about how much he means to her. Kousei is her goal, too. Emi first encountered Kousei when she was in the audience of his very first performance in front of a crowd. He was a bundle of nerves, but the performance caused an explosion of emotions in the young Emi, and she decided to become a pianist right then and there. 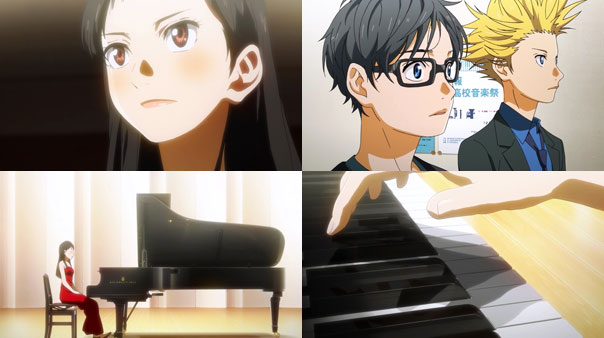 Just as Emi made clear to Kousei what Takeshi meant to him, Takeshi tells Kousei that Emi, despite her hard edge, has actually ‘had a thing for him’ for a long while. And while Takeshi stood up to his inherent fear of performing, an act of pushing in, Emi’s situation is a little different: she must organize and redirect the storms of emotions flowing out of her upon those 88 blacks and whites.

She had a tasty scone that morning, she looks fantastic in her dress, she’s having a good hair day, and Kousei is listening, so the conditions are perfect for her to belt out the most gorgeous and enthralling piano performances of the show, easily surpassing the one Takeshi just played. (The piece is Etude Op. 25 No. 11 in A minor, “Winter Wind.” by Chopin, which…seems kinda hard to play.) 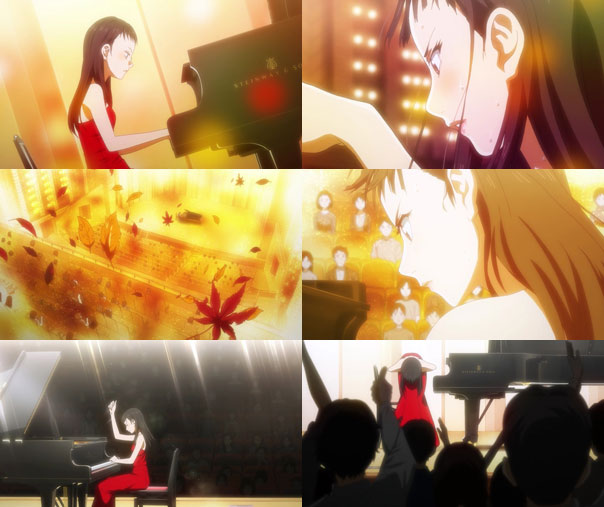 Like Kaori, she pours those powerful emotions — her soul — into the notes, moving everyone listening and even creating an otherworldly synesthesic environment where her emotions take on color: red for anger, but also yellow for loneliness. She fashions a horn of her piano: a horn she compels to ring out. Not simply in anger or rejection, but in hope of reaching the Kousei who made her a pianist and compel him to come back.

Like Takeshi, she’s only there for him. It’s not about winning or besting him, it’s about using their music to bring him back. Even if Kousei ends up besting them both (which I maintain is doubtful this early in the run, but hardly impossible), it will be a victory for them as well. It will mean an injustice has been righted, and mark Arima Kousei’s official return to Music with a capital M.

What else starts with M? Masterpiece. This was another one. Your turn, Kousei!