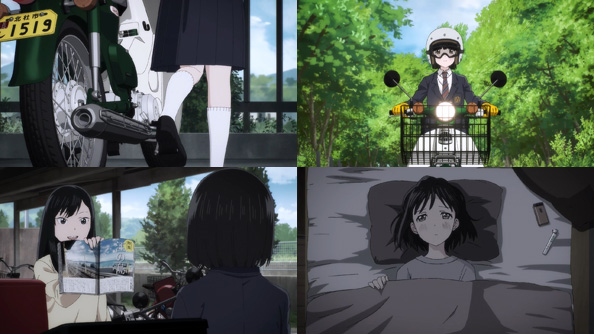 Koguma has been busy since we last saw her: she has her motorcycle license and Shino bored out her Cub into a 52cc Type II Motorbike, meaning she’s no longer limited to 30 kph. It may not be a fire-breaking chopper, but every little improvement to her Cub makes Koguma feeling a little more liberated.

It looks like she’ll be riding the bus with the rest of her class on their trip to Kamakura, though since Reiko will be with her, it’s not all bad. Reiko wants to see the Shonan Bullet Road, but absent motorbikes to ride on that, Koguma would rather splurge on some tasty local cuisine. And she’s super excited about that food—a far cry from the plain konbini-bought microwavable meals she usually sticks to. 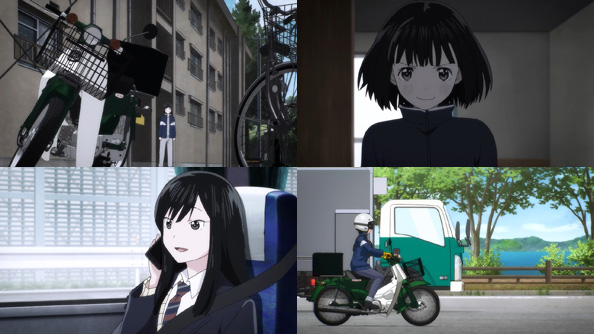 So it’s heartbreaking when she wakes up with a low fever and has to stay home. But then, a few hours later, her fever breaks. When she kicks a rock in frustration, it skips right over to her Cub and bounces off the exhaust, and it’s as if the universe is telling Koguma what she must do.

Donning her gym jacket (it’s a uniform!) and calling Reiko to announce her plans, Koguma plots a course and hits to Kamakura on her Cub. Reiko warns her to be careful and turn back if she runs into any problems, but promises to have her back when she arrives. 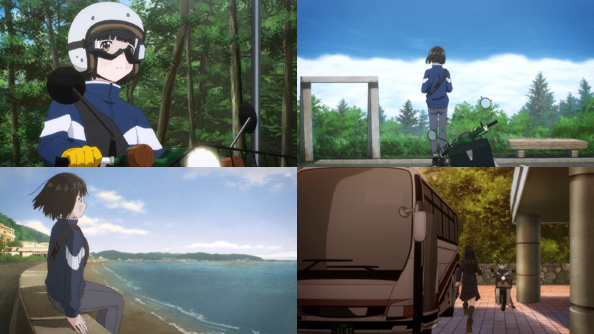 Like most times when Rin rode herself to campsites, it was a blessing in disguise that Koguma’s temporary fever kept her off that bus. Her solitary ride gives her more time with her Cub in a new place, and tests her endurance and navigating skills.

The scenery is also awesome, especially when she looks out into the sky from Fuji-san’s fifth station or riding the Shonan Bullet Road beside Sagami Bay. Koguma built some detours into her trip so she wouldn’t arrive at the hotel to early, so it’s adorable when she pulls in just seconds before the class bus to a relieved and elated Reiko. 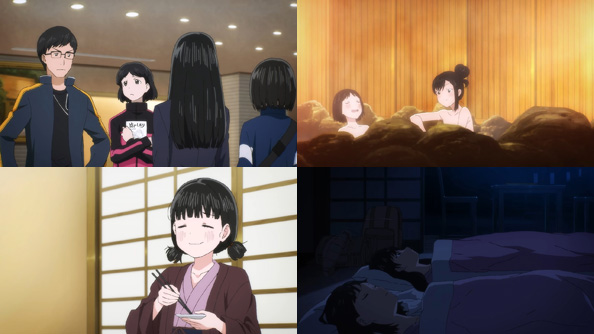 As promised, Reiko stands right beside Koguma as she gets a talking-to from the faculty, but it’s not like they can turn her away, so instead they bar her from riding her motorbike for the remainder of the class trip. They believe she’s really sorry, but the looks she and Reiko exchange indicate otherwise!

She and Reiko hit the baths, and she tells Reiko how far up Fuji-san she went, and how she stole a march on Reiko by riding the Bullet Road before her. After a soak Koguma revels in the sumptuous evening feast, and before the two fall asleep in their adjacent futons, they form a plan of action for tomorrow’s designated free time. 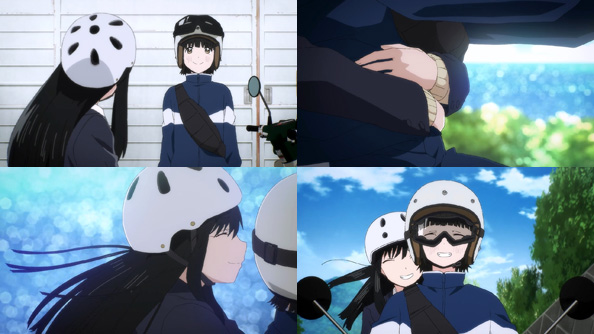 That plan involves locating her Cub, retracting its rear footrests, and sneaking off to ride double or “two-up” on the Bullet Road. Reiko even brought a light helmet along for emergencies, and is wearing just the brightest, most infectious smile as she holds Koguma tight from behind.

It’s not just about the ride itself that’s so invigorating, but the fact that they’re breakin’ the rules. The teachers can’t clip these lovely bike wives’ wings—they’re gonna fly! While resting at a station, Reiko admits that she kinda broke her Cub during her summer adventure on Fuji-san, so she’ll need to procure a new one. Fortunately, she has a lead on some rare, out-of-production, and very sought-after Hunter Cubs.

As for Koguma’s Super Cub, Reiko says she’ll probably be able to keep riding it the rest of her life, and that prospect really heightens Koguma’s world. When the two hop back on and continue their forbidden joyride, positively  bathing in lush, vivid greens and blues of their fast-moving surroundings, Koguma declares “I’m not going to change. I don’t want to change. I’m going to keep riding forever…Together with my Super Cub.”