One of the many great things about Kill la Kill is its soundtrack, which is just as over-the-top and bombastic as the visuals. One of our favorite tracks is Ragyo Kiryuin’s theme, which is sung in German. 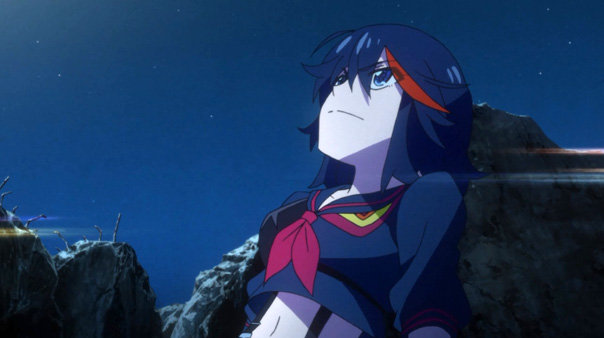 We’ll say this much: Kill la Kill does a “sports festival episode” like none other. We’ve spoken before about how sometimes a primarily building-up episode can surpass the payoff that follows, for the simple reason that the buildup episode is suffused with boundless promise even a great payoff would be hard-pressed to fulfill.

What we’re saying is, whatever the quality of the payoff that awaits us down the road, it won’t not diminish the excellence of the buildup that took place this week. Despite hardly solving anything, this just might be our favorite episode of Kill la Kill yet. We’re tempted to watch it again immediately, and again after that. Sometimes, buildup can be its own payoff.

So what was this buildup we’re on about? Satsuki returns to Honnouji and announces a sports festival in her mother Ragyo’s honor. Ragyo oversees the global distribution of life fibers and prepares to head to Honnouji. All citizens of Honnou Town are invited to and issued dress uniforms for the catered affair, including Mako’s fam.

Meanwhile, Mikisugi and Kinagase observe the academy from hidden cameras and complete Ryuuko’s education, telling her the academy and surrounding town are one big laboratory for testing human resistance to life fibers. The student body and townsfolk are the white rats, and the dress uniforms provided by Ragyo are snakes that, when she presses a red button, start to feed on the people.

The good guys swoop in to the stadium to save the day, stare down the bad guys and “To Be Continued” flashes on the screen in those big chunky red letters…Right? Well, not so fast: as Ragyo is talking (down) to Ryuuko, Satsuki plunges her katana into her own mother’s back, announcing she’s rebelling against the life fibers. Ohoho, now we’re talking.

Especially last week, the show’s been going out of its way to humanize Satsuki and facilitate empathy for her; she was, like Ryuuko, dropped into her current role by her parent, after all. By contrast, Ragyo and Nui, for that matter, only vaguely resemble humans both physically and emotionally.

In any case, those two are clearly not on the side of humanity—which isn’t to say Satsuki’s suddenly turned into a “good guy”, but she’s certainly become an even more compelling and likable co-protagonist alongside Ryuuko. Frankly, there’s a lot we still don’t know: Ragyo’s fate; Nui’s response; the fate of all those people (save Mataro) being eaten by their clothes; how Satsuki will deal with Ryuuko & Co.; what she’ll actually do with the throne she seeks to take; what the life fibers have to say about all this.

In any case, Satsuki has obviously worked diligently to maintain the illusion of a dutiful daughter while plotting her mother’s downfall behind her back. In reality, for a while now Satsuki hasn’t seen Ragyo as her mother at all, but as a rival to be defeated; and Ragyo has been too blinded by her own splendor and hubris to notice.  Everything that built up to this fresh batch of questions was impeccably engineered for maximum entertainment value. It was at times serious, introspective, fascist, funny, and florid, and took us (like Ryuuko) completely by surprise. We couldn’t have asked for much more. 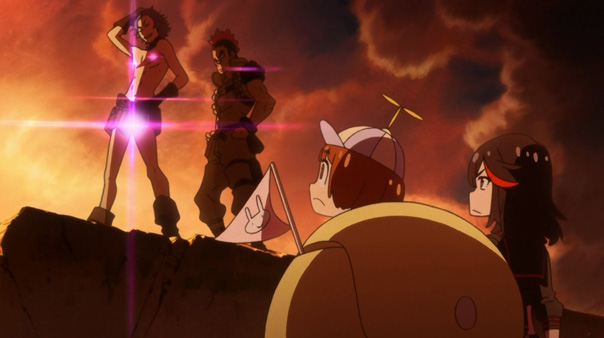 Leave it to Kill la Kill to earnestly, regretfully inform us from the start that this is the recap episode we’ve been dreading, only to blaze through said recap in less than two minutes, occupying only the cold open before a brand new (and quite spiffy) OP. It’s a great little psychout, and one more reminder Kill la Kill isn’t just kicking ass telling its own story, but also an ongoing commentary of anime in general.

To whit: this week we learn the deep dark secrets of life fibers and kamui, and Ryuuko is revealed as the “Chosen One” who will curtail the Kiryuuins’ seemingly infinite ambitions. But Ryuuko isn’t the only chosen one here; so is Satsuki, who surprisingly undergoes an education parallel to Ryuuko’s: here we were thinking she was in the know about everything (she certainly didn’t hesitate to make Ryuuko think that was the case), but she wasn’t.

It’s fitting then, that it’s confirmed to both her and Ryuuko at the same time what they had already suspected: each girl is the savior and hope of their respective faction, which makes them diametrically opposed enemies.That deep dark truth? In short, Life Fibers are aliens. They helped humanity evolve to its present level of physical and mental sophistication, and then, like creator gods, they simply sat back and admired what they had wrought. Like farmers, they awaited the fattening of their herds, for Life Fibers use humans as food.

As such, humans didn’t choose clothing, clothing chose them – a concept as absurd as it is awesome. Kiryuuin Ragyo re-initiated contact and has been essentially doing their bidding, distributing dormant fibers to the population on a global scale. Now possessed of this knowledge and their expected roles in the great battle to come, Ryuuko and Satsuki react in appropriately opposite ways. 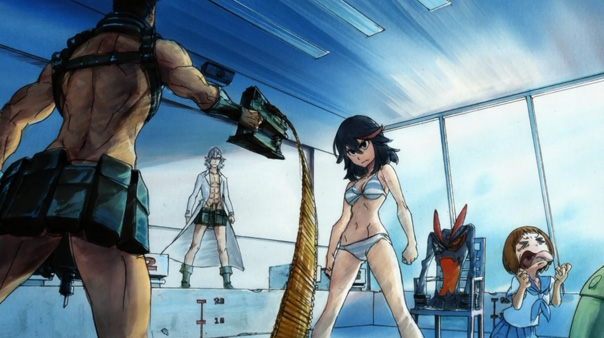 When the hatch to the helicopter closed, Satsuki collapsed from exhaustion and her kamui had to be sedated. Her activities have taken a far greater toll than Ryuuko or anyone beneath her know, but she refuses to give in to fatigue or pain. And yet even after her mother essentially fondles her in the bath (what is it with rich people?), and even though there are times when Satsuki seems taken aback by the things she’s learning, she doesn’t (outwardly) hesitate in answering her call to duty.

Meanwhlie, Ryuuko says “fuck that.” Because she doesn’t want to fight? Because she can’t handle that level of responsibility? No: because she doesn’t want her friend Senketsu to be forced into fighting his own kind just because Matoi Isshin made him good at it. At the end of the day, the only one who chose her to be the “Chosen One” was her dad, just as the only one who chose Satsuki was her mom. But we’re certain Senketsu will choose to fight with Ryuuko.