In Shibaki Kouta’s quest to reach ever higher stages of manhood, it’s been two rungs up the ladder and one rung down. A girl lives with him, but there’s nothing he can do about it because his mom thinks she’s his sister, and stands ready to gut him at the first sign of perversion.

This week the trend continues when a girl finally joins the Occult Research Club, but things don’t turn out the way Kouta hoped. The girl in question, Kujirai Tanako, may be the best-looking first-year, but she’s a couple eps short of a cour, in anime reviewer’s parlance. 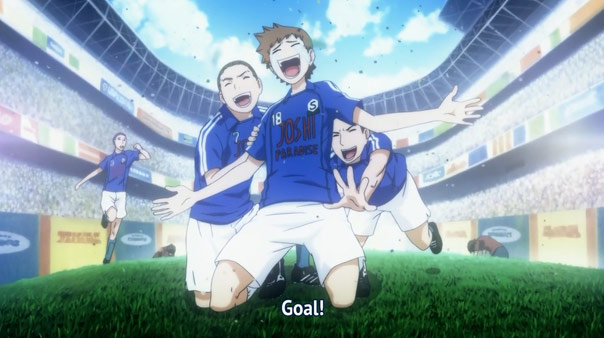 In fact, this episode also came up a bit short in the compelling department, owing to the preponderance of side characters like Tanako—a tiresome fraud of a magician—and Kouta’s club pals, none of whom make much of an impression. I was also way ahead of Kouta in realizing Tanako was interested in the glasses guy, not him—though ironically the glasses guy seems more into Rurumo. 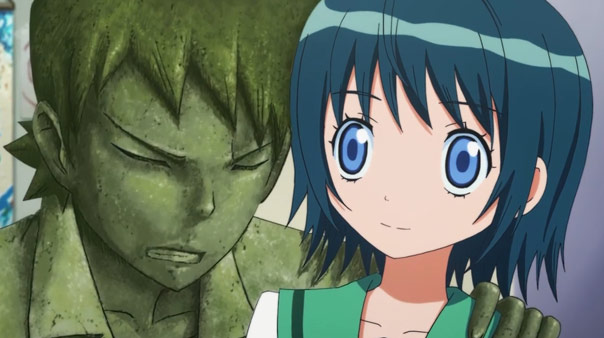 The progressing Rurumo-Kouta dynamic this episode from mediocrity. It wasn’t so much Rurumo’s klutz clinic in her cafeteria job, tripping on nothing and breaking everything, but the fact that Kouta continues to grow as a human being now that there’s someone in his life he wants to support.

Heck, Kouta was focused on a completely different girl most of this episode, but after that bubble inevitably burst, he confronted Rurumo about why she’s trying so hard. Her answer’s simple enough: she has to, as she’s always had to. She’s worried Kouta’s unswerving kindness will make her complacent, and so insists on “restricting herself.”

Yamagishi Saki from One Week Friends was fully aware of her limitations and of the need for someone to lean and depend on. Presently Rurumo seems to be a person of similar limitations, only she’s fearful of depending on someone else. I’m not saying Kouta is the Ideal Man, but he’s the first person to be this kind to her—and she’s the first person he’s been this kind to.

Both are dealing with a completely new kind of interaction; it’s natural to be weary or uncertain. But it’s already apparent that, despite his occasional flights of puerility, Kouta’s slowly becoming a better person with Rurumo in his life. No reason that door can’t swing both ways, as long as Rurumo doesn’t bar it.