There’s no lengthy ER-style scene in which Albert and Sistine work to save Glenn’s life – their spell is already complete, Glenn wakes up, and Sisti is the one asleep from using so much mana. Albert is simply waiting to get going, and makes it clear to Glenn that rescuing Rumia is the priority. If Re=L gets in the way, Al won’t hesitate to eliminate her. 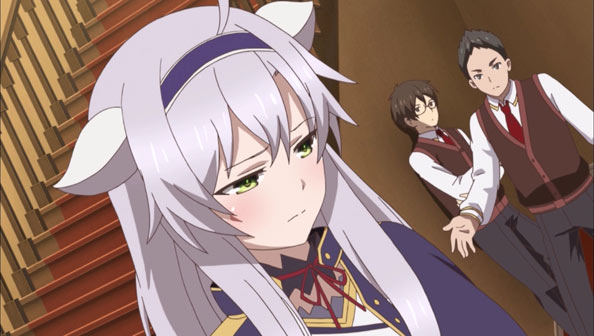 By the time Sisti awakens, Glenn and Albert are long gone, but she resists the urge to go running after them, and instead chooses to put her faith in their ability to bring Rumia back save. Even when some classmates want to do something, Sisti insists on sitting tight. Talented though they may be these are all young, totally inexperienced students who are unprepared for the kind of combat we’ll see Glenn and Albert face. They’ll only get in the way.

That being said, Glenn and Albert carve through the gauntlet of chimeras Director Berks, Eleanor Chalet, and Re=L’s bro have ready for them awfully easily, to the point where it starts to get a bit boring and perfunctory. As for Berks himself transforming, it feels like exactly what it is: an excuse to make Glenn rescue Rumia—and flip Re=L back to their side—all by his lonesome.

Eleanor isn’t even concerned with fighting a battle here: she gets what she needs (data on the Revive Life ritual) and skedaddles long before Glenn arrives to confront Re=L and her bro. Glenn manages to prove to Re=L through a combination of yelling and telekinetic pistol-whipping that the man standing there isn’t really her brother, because her brother’s dead.

Actually, Re=L died too—or rather the girl Re=L was modeled after. That girl, Ilushia, was disposed of along with her real brother Sion once her “replacement” was created. And when Fake Bro can’t rely on her anymore here in the present (because she still has emotions), he whips out a trio of emotionless, “perfect” Re=L clones (in skimpy S&M outfits, natch).

Far from “perfect”, are just as easy to defeat as the chimeras. They’re in the picture for so little time I’m not sure why they existed at all; it’s as if Glenn and Re=L simply blew on them and they fell over.

I’m glad Re=L’s backstory (and name) are explained, and I’m satisfied her sudden betrayal last week was due to her inherent programming, but this episode still couldn’t match the third and sixth episodes in terms of being satisfying conclusions. The bad guys were too dumb and pushover-y (or in Eleanor’s case, disinterested), and everything was rushed and wrapped up too neatly.

Not to mention, I think I’ve had my fill of Rumia-napping stories. Can we take the fight to Divine Wisdom, already…or as she demands in the preview, more Celica Time? 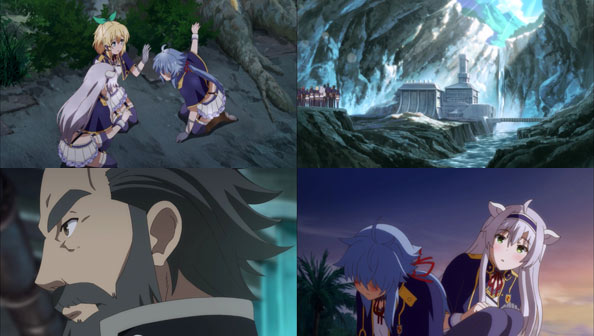 When the students finally get to the White Alchemy Research Lab, the resulting tour is somewhat interminable and clunky, full of characters explaining things (or interrupting others to explain things), then discuss how dangerous it is to resurrect the dead before saying such practices would never be carried out nowadays.

It all feels like foreshadowing for what Eleanor and the RDW have up their sleeves for their next attempt to nab Rumia. And with her supposed bodyguard Re=L in an extended snit borne from her jealousy over her and Sistine’s closeness to Glenn, Rumia is particularly vulnerable, especially when Glenn goes off to find Re=L, who stormed off in a huff.

The boring lab tour nonetheless succeeded in placing me in a false sense of security, just as RokuAka’s first episode so ably did, sacrificing a consistently dark tone, but resulting in a satisfying emotional roller-coaster as shit hits the fan.

Just as Re=L is approached on the beach by her apparent brother (who I immediately assumed was RDW), Eleanor faces off with Albert, Rumia’s actual bodyguard, albeit a long-distance one. It’s time and distance that screw him over, as the increasingly unhinged Eleanor is merely creating a diversion; keeping Al away from where he should be.

Glenn leaves Sistine and Rumia alone to go look for Re=L, obviously lulled into a false sense of security. He clearly isn’t aware of how easily Re=L can be turned to the dark side by her “brother”, who uses some kind of eye-contact hypnosis/brainwashing to turn her against Glenn, running him through with her massive sword.

Another who is caught completely off guard by what the RDW has in store for them is Sistine, who cheerfully gathers food for Glenn and Re=L’s return, certain Sensei will come back and everything will be fine…until she hears glass breaking, enters the room, and finds Re=L standing over a severely wounded Rumia with blood everywhere.

As we know, Sistine is not a professional soldier or warrior. She can be a badass, as we saw at the competition, but she’s still a kid, and this week we get another realistic reaction to the horrible fucked-up shit she has to deal with: When Re=L (who is a pro) basically dares her to use offensive magic, poor Sisti, scared shitless and worried about hitting Rumia, freezes, and Re=L escapes with her captive.

When Albert comes in with the half-dead Glenn, and Sisti sees how bad his wound is, she goes into a fit of despair…also quite appropriate for an ordinary, well-adjusted young civilian. Fujita Akane has done great work with the voice of Sistine all Spring. Of course, Sisti isn’t a complete wuss either, nor is she immune to the proverbial glass of cold water, which Albert provides by starting to leave if she doesn’t buck up and help him save Glenn. While he prepares the reviving magic, Sisti must administer CPR.

It’s the old ABC method (rather than the present, AHA-prescribed CAB method), which means locking lips with Glenn. But the show doesn’t treat it as a romantic moment or a joke, but as a life-and-death necessity, which I appreciated. Where RokuAka does joke around is after the credits roll, with another pleasant palate-cleansing preview, which is the proper time to do so.