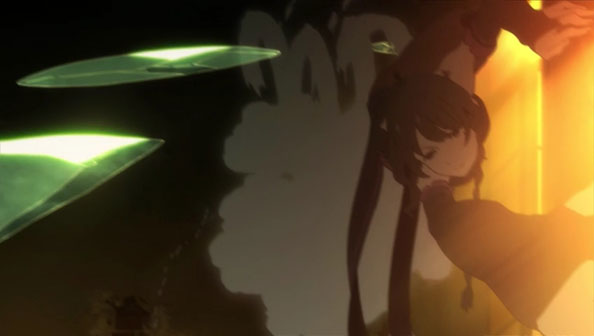 Subaru is surprised to find “Satella” at the loot house before dark, but not for long, as he realizes her nature never changes no matter which timeline he’s in. She always helps the lost girl, then ends up tracking Felt down. However, just when Subaru is making progress mediating between the parties (by being nice to both), Elsa comes out of the shadows.

Again, Subie uses his knowledge of Satella to summon Puck to shield the blade, knowing he’s still corporeal this time of day. But Elsa still manages to severely wound Old Man Rom. Puck and Satella launch a pretty-yet-terrifying counterattack with their green ice-like crystalline magic, but to no avail—like a cockroach, Elsa just won’t go down. 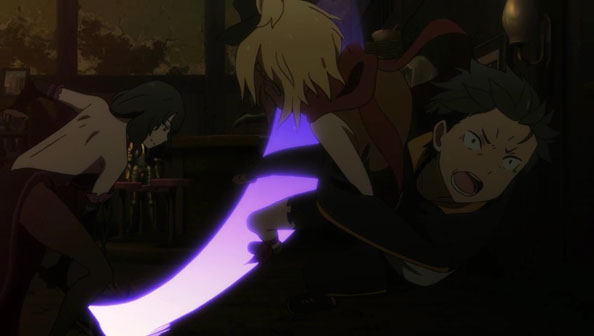 During Elsa’s fight with Rom, Felt, Satella, and Subaru, she’s full of quips, and so is everyone else. As the blades and crystal saggers fly, so to does the juicy dialogue, which is just as sharp and satisfying as the action.

Subaru makes mention of how cool he is when he realizes he needn’t fear dead (since he can always start over at the vendor) but at the same time, really doesn’t want to die and have to start over, especially now that he’s made progress with both Felt and Satella.

Satella goes down for a moment, but gets back up and helps Subie when she can from long range, while Felt is able to escape outside to call for help, which they’re going to need because Elsa is as relentless about disemboweling everyone as she is hard to kill.

That help comes in the form of Reinhard, who is a resplendent model of ultracool fantasy hero timing, appearances, and dialogue. He doesn’t even take out his own sword, choosing instead one that’s lying around, so confident is he that he doesn’t need to go all out against the likes of Elsa, the “Bowel Hunter.” It’s also cool how Elsa knows him too, and is excited to see what he can do before she kills him.

In a great bit of world-building even within this one loot house interior, Satella admits Reiny can’t go all out while she’s healing Rom. But when Rom is out of danger, she gives the go-ahead, and Reiny goes ALL OUT, launching a terrifyingly powerful attack that rends half of the bottle episodes bottle clean away. Outstanding presentation of an “overdrive” attack.

Everyone celebrates the victory, until Elsa pops out of the wreckage, STILL not dead; only wounded. Fortunately, she chooses the better part of valor by retreating, but the fact she’s still out there with her chilling desire to disembowel everyone else is certainly…disquieting, as is the fact even that huge attack didn’t kill her.

Her last attack is foiled by Subaru, who uses Rom’s giant bat to parry her blow, saving Satella in the process. When the coast is clear once again, Subie goes into self-aware fantasy hero mode, asking for something from his rescuee in return for his heroics: her name. She replies, Emilia, with just about the sweetest gosh-darn smiles of the Spring. A great little transaction. 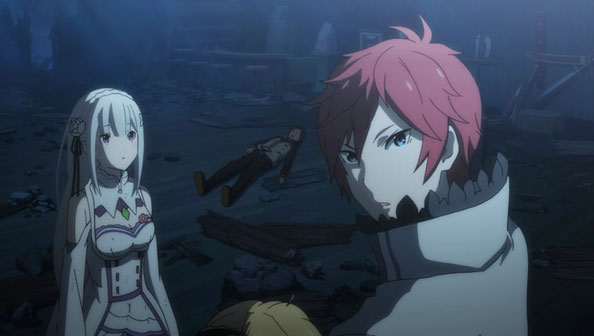 Even with all the twist and turns we’d experienced so far, Re:Zero still isn’t done yet, as when Felt finally produces the insignia she stole from Emilia to return it to her, Reinhard suddenly hardens his previously lenient stance (he’s off duty, so he’ll overlook theft) and formally arrests Felt, hitting her with a sleep spell when she resists.

Once again, the strong reaction from another world insider creates great gravity and significance for one innocuous-looking little piece of jewelry, like the name “Satella.” But this time, Subie didn’t call her by that name, got on her good side, and when the wounds Elsa made finally open, she heals him and prevents another reset.

I was really glad about that, because my heart nearly plummeted all the way down into the Central Dogma when it seemed like he was going to die. That said, I do hope Felt is okay—she seems to be a pawn in all this—and Subie and Emilia can secure her freedom without making Reinhard mad or getting the law on their backs.

Overall though, this week was simply a tremendous piece of entertainment. Succulent kick-ass combat, quick-witted, tasty dialogue that never felt in the way, and countless twists and turns that only added to the richness of the whole—this was the complete package.

And it was a brilliantly compact package at that, with 99% taking place in the confines of the loot house, without the setting ever seeming stale for a second. Eschewing the OP and ED were also a gutsy choice for what is just the third episode. Re:Zero is a must-watch Spring experience, and this was its best episode to date. Hopefully it keeps this up.