86 eschews dialogue and even diagetic sound, sticking with visuals and music to tell the story of Spearhead’s newfound freedom. Followed by their ever-trusty robot porter Fido, Raiden, Theo, Kurena, Anju and a far happier, less haunted Shin continue their “deep recon” mission by heading further and further from their Republic minders, camping out and keeping a low profile as columns of Legion pass by in the night. 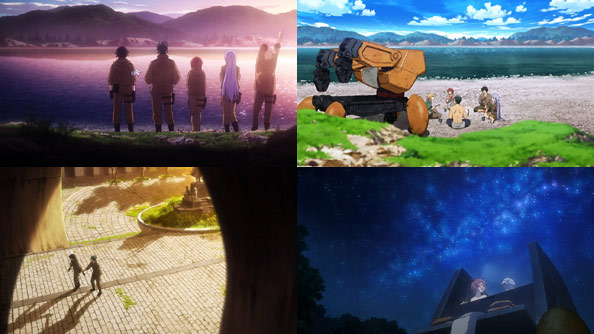 It’s so nice to finally see these good kids get to live like the kids they are, not always having to worry about going into battle or being killed or being turned into a Legion. Being in the vivid blues, greens, and purples of nature make for a nice change of pace from their usual gunmetal grays and blood reds. They wash their uniforms, and trip to an old Imperial town nets them a boiler in which to heat a much-appreciated bath.

Shin is smiling and laughing the whole time, but still seems distracted by something, though it’s no longer his brother, whom he’s satisfied is now at rest. Like the others, I feared the worst when they woke up to find him gone, but Raiden remembered the tunnel in the town Shin took a good look at, and it leads them to a zoo where he’s found an immobile Legion with the brain of an 86, which Shin puts out of its misery.

The five stare for a long time at the skeleton of an elephant and other beasts who died locked behind bars, and wonder if they’ll end up the same way. It’s Fido, of all of them, who tells them to stop talking about such things and keep moving forward. While Raiden withdraws his question of whether Shin will be going across the water by himself—and possibly to the good Major, who doesn’t appear this week—he probably already knows the answer.

After the credits roll with almost ten minutes left, we get a retrospective of sorts of the life of Fido, starting with him finding and befriending Shin. He’s been there since this most recent cycle of Spearhead began, and probably before that, and all this time has been capturing all of these small moments of joy and grief. Shots of characters long gone smiling and playing are shown, then immediately juxtaposed of images from the day they died.

The most foreboding and indeed deeply upsetting moment we see happens at the very end, with Fido, and all of the memories he contained that for many of the 86 represented their only record of having existed on this earth, is blown up, most likely by Legion, on October 30, the latest date we’ve seen so far.

On one level, I have to think Shin and the others will be alright, even if Fido very clearly isn’t. And even with Fido’s stored “memories” have gone up in smoke, those five still carry memories of the fallen—all 576 of them, including Shin’s brother. The question is, assuming they’re alright, what will become of them? Will Shin find a way to get to Lena? I suspect next week’s season one finale will focus exclusively on her, and what progress if any she’s made in her one-woman crusade to save the soul of her nation.