Ushio gets a much-needed breather at the bread shop of the old man he saved from the youkai, but the youkai hordes are still out there, and once they find him, he’s thrown right back into a battle where the youkai have all the numbers, and Beast Spear or no, Ushio is getting worn down. Enter Kagari and Raishin, who are not only there to help him, but are willing to die by his side.

The kamaitachi are nothing if not loyal to those who helped and empathized with their plight. I find myself liking them more and more. Yet even with them around, the youkai keep coming. It’s ultimately Tora who saves the three of them from the hordes, deciding not to sit on the sidelines after all. Sure, that puts him in Hitotsuki’s crosshairs, but he couldn’t care less; in fact, he wouldn’t mind fighting his old associate, for no other reason that he keeps calling him Nagatobimaru!

Ushio finds himself deposited before a large traditional Japanese estate wreathed in fog, and he is welcomed to come in, calm down, sit, and listen. The Zashiki Warashi is there, along with the leader of the youkai who have been attacking him; Hitotsuki’s long-nosed boss. He tells Ushio a little more about who her mother is, and the nine-tailed Hakumen no Mono she protects from the youkai with a powerful barrier, as her predecessors have done for the last thousand years. What the youkai boss can’t tell Ushio is why, but he suspects Ushio can ask her himself when he finds her. 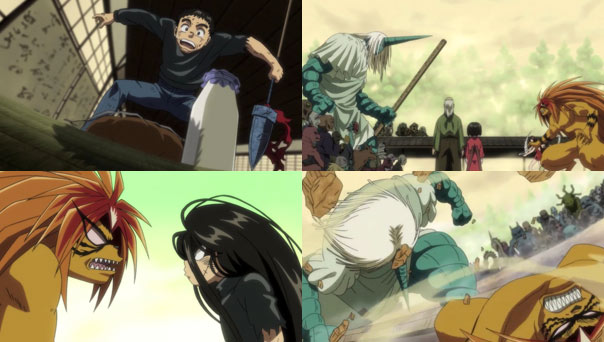 Ushio also learns the reason the boss is being so nice to him: he’s the old man he saved in the forest, who he hung out with at the bread shop. Like Kagari and Raishin, if one is kind to youkai, chances are they’ll be kind to you as well; they’re not wholly evil or anti-human under all circumstances.

As for Hitotsuki, the boss is miffed for him disobeying orders, but allows him to duel Tora to decide whether he gets to have his way. As I said, Tora is fine fighting him, considering they have history, but twists himself in knots explaining to Ushio that he’s not doing this for his sake (even though he really kinda is.)

At first Hitotsuki mops the floor with Tora, slapping him around and biting him with his many serpent-head digits and goring him with his giant horn. But Tora eventually takes the gloves off, breaths fire on his opponent, then zaps him and smacks him around until he’s declared the winner (though Tora doesn’t kill him, again showing his new, slightly softer side). The boss shows his true form—a magnificent Tengu—and promises Ushio none of his youkai will harm him ever again, as per the terms of the duel.

With that, Kagari patches up Tora (I like the deference the kamaitachi now show to who is essentially their “senpai”), and he and Ushio head into the misty woods on the next leg of their eventful journey to find Ushio’s mom. Turns out it will take a lot more than bumping into an old acquaintance like Hitotsuki to break his complex bond with Ushio.

No Gate or Food Wars for Hannah tonight, as every other Summer show seems to want to take a week off at some point in its run, but at least I’ve got Ushio to Tora, which after this week has just one final episode until its second cour. And while there was a pretty good amount of action and fighting this week, there was also a lot of standing around talking and infodumping, indicating this was an episode to pause, take stock, and bring Ushio and Tora up to speed as to the youkai situation.

And here is that situation: the youkai are pissed. They know who Ushio is, and more importantly whose son he is, and while we still don’t know a whole lot about what his mother has done (or continues to do), it’s enough to unite a whole mess of low-to-mid-level youkai into a marauding confederacy of sorts. If they can’t hurt his mom, they’ll sure as hell try to hurt him. Thing is, it doesn’t seem like they really can. They have the numbers, but like Tora, none of them can stand up against the power of the Beast Spear, which acts on its own to save Ushio when he’s bum-rushed.

He gets away from the crowd and comes upon a swamp where a helpful kappa (who doesn’t share the youkais’ vendetta) heals his wounds and tells/sings him the story of Hakumen no Mono, a monster who wanted to do away with all other monsters and have all of humanity to itself to torment. Meanwhile, Tora is separated from Ushio and ends up getting the lowdown from his old youkai pal Hitotsuki, while the kamaitachi, now firm friends of Ushio, if not other humans, refuse to join the youkai lynch mob.

It could well be that the power Ushio’s mom wields, and has apparently inherited as the lastest “tasked woman”, is a blight to youkai and a threat to the yin-yang balance of the universe. But this episode only goes so far in revealing who and what she really is, even to Ushio, who till the end thinks the welcoming committee is being a bit rough on him. But these are ancient monsters he’s dealing with, who have no qualms about hurting a woman who hurt them but can’t hurt her back by hurting her son.

As for Tora, Hitotsuki tells him he’s free to join in the hunt, but otherwise had better stay on the sidelines. Tora, for his part, seems to acknowledge he’s gone a bit soft, lacking the cruelty for humans he once possessed. He says he possesses Ushio so that he can one day kill and eat, but he has nothing to show for it, except an increasingly dull edge. I’d say he’s due for some kind of fresh betrayal of Ushio, but there’s the persistent issue of that Beast Spear, and the fear of 500 more years trapped in a cellar. So we’ll see which side he ends up on.

Last week’s Fusuma side-story is followed by another side-story on Ushio and Tora’s journey to Hokkaido, and the show continues to prove it’s imminently competant at entertaining standalone stories that are part and parcel of Ushio’s new role in the world as a keeper of balance.

This week’s tale involve a family of fox-like Kamaitachi youkai siblings, two of whom are trying to reign in their wild, murderous brother Juurou, whom we meet as he rips the roof off a Honda, lopping off the heads of its occupants in the process. Kagari and Raishin are the sensible, older siblings, who test Ushio then bring him to their home in the forest. 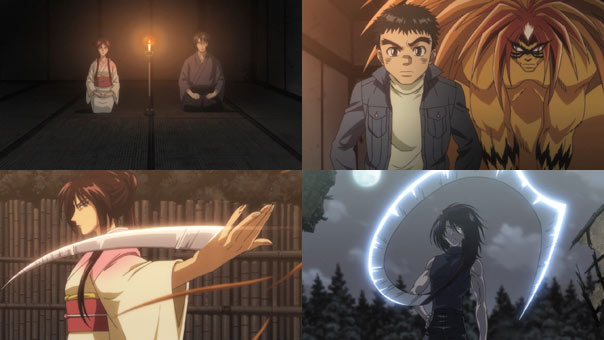 They don’t mince a bunch of words: they want Ushio to kill Juurou, before he kills enough humans to incite a reaction that will wipe out all kamaitachi. That being said, it’s never clear whether these three are all that’s left of their kind. All we know is, Raishin and particularly Kagari are immensely proud youkai, and while they love their brother (Kagari lops Tora’s arm off when he speaks ill of him), killing humans without reason is wrong.

Of course, when Juurou shows up, looking every inch the troubled, rebellious baby brother, he gives his reasons: every time he and his siblings are settled and content, the humans come and build something, destroying their home in the process and making them flee. He’s sick of it, and he’s become consumed by hatred, both of humans and for himself for not being strong enough to stop them. All he can do is lash out indiscriminately, treating all humans as guilty. 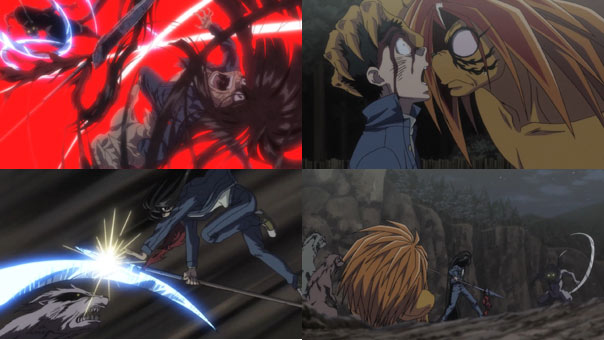 Ushio can’t let that stand, so he rushes Juurou, but runs into a spot of trouble when he’s FRIKKIN’ KILLED. The look on Tora’s face when he realizes Ushio has died, and the panic that seems to course through him until Kagari heals him, is more evidence that Ushio and Tora are Best Frenemies Forever. I also like how Ushio dies, if only temporarily, even in a side-story episode. His life is a lot more dangerous. Fortunately, he’s an extremely tough kid, and they come right back at Juurou before he can kill any more humans. 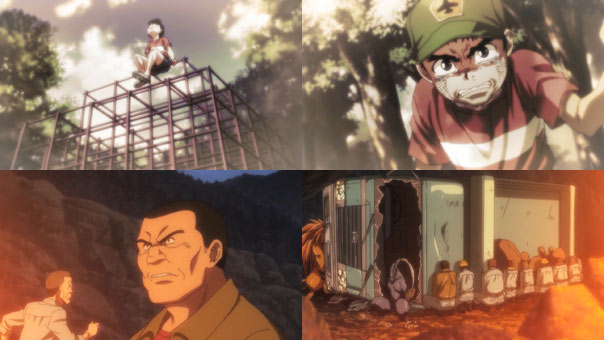 Once Ushio has met Juurou, he can relate to the hatred of having something he loved taken away—in his case, a “dangerous” jungle gym that was dismantled after a kid fell off it. Ushio’s always been the kind of guy who learns lessons by falling off or into things, perhaps not entirely sensitive to the frailer youths around him. But I can imagine being his age and losing something that cool would be devastating, even if it’s not the same scale as the Kamaitachi losing multiple homes to human development.

The site of the still under-construction freeway becomes a battlefield, but a sequence of events, from Juurou tearing off a big side of a rocky cliff to a truck falling on Kagari and Raishin and its gas leaking out, to the construction workers accidentally igniting the fuel with his cigarette, the situation just grows more and more tense. But Ushio and Tora keep the rock and truck from crushing Juurou’s family, and even a few construction workers hear Ushio’s pleas for help and are able to lift the truck off the Kamaitachi.

It’s a night that shows Juurou the better side of humans, and that morning Ushio vows to find him and his brother and sister a new place to live where they’ll be safe. Juurou says that would be great, but leaps out to attack Ushio anyway, getting stabbed through the heart with the Beast Spear in the process.

There’s no happy ending here for the family of Kamaitachi, as perhaps Juurou believed it was too late for him, after all the killing he did and pain he endured. But hearing Ushio simply acknowledge the magnitude of what humans did to him, and earnestly apologizing, helped Juurou die a marginally happy youkai.