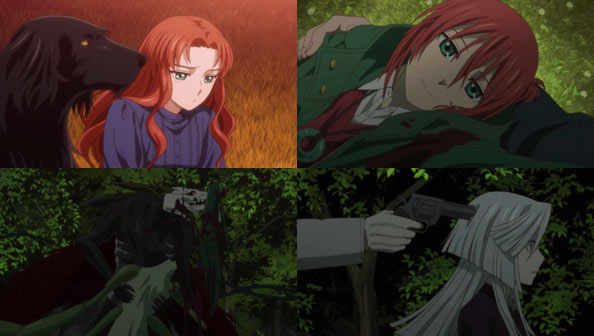 When Chise goes down, Ulysse fears the worst as he recalls the fate of his sister Isabelle, chased into a street by bullies and killed in a car accident. Isabelle never woke up, but Chise does, could see his thoughts, and tells him she’s okay.

Meanwhile, an enraged Elias in his true(r) form tears the chimera of the ageless sorcerer (whom Elia later calls Cartaphilus) to pieces, while Renfred shoots him in the head, giving everyone a bit of time to rest and Elias to return to a less terrifying (and more importantly, shorter) form. 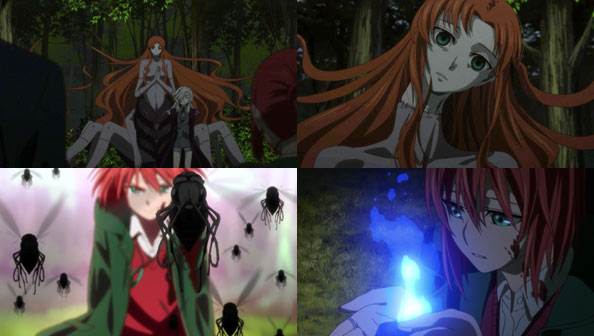 Cartaphilus heals quickly, however, and summons another chimera: this one with the body of a giant spider and the head of none other than Isabelle, to capture Ulysse.

Chise isn’t having it, using her masses of magical power to summon a swarm of tarantula wasps from the ether; Elias warns her not to mess with the laws of nature in such a way, and manages to hold her back, but she’s super cheesed-off.

A blue flame fairy spirits them away from Carty and the chimera to a safe place, and lends Chise a lump of his coal to calm her racing blood.

When Carty appears once more with his Isabella-headed chimera, Chise forms a pact with Ulysse in a stirring ritual to make him her familiar, whom she renames Ruth. Their hearts, minds, and lives now bound together, Ruth attacks the chimera without reservation, knowing the Isabelle he knew and loved isn’t there and won’t be coming back.

Alice shoots off Cartaphilus’s arm, and with Chise and Ruth now in a familiar pact, decides they’re no longer worth his time, and he apparates away. Being an undying force of nature more than a human or beast, may well return if and when his interest is re-sparked.

But for now the threat has passed, and Elias bids that he, Chise, and Ruth all return home, where Chise will be healed, scolded, and told more about everything that went down, as well as the ins and outs of having a familiar.

This week the sorcerer Renfred and his apprentice are cast in a slightly more sympathetic light, as they are operating under the command of the same ageless sorcerer who led Matthew to murder cats in an attempt to save Mina. Renfred puts keeping Alice safe over resisting the guy, and that seems like a good idea…provided keeping Alice safe is possible.

Meanwhile in the countryside, Chise continues to learn magic from Elias, and even helps out with potions and remedies…though her nightmare ward is brewed with too much magic, making it a sleeping agent. Elias provides Chise with a ring that will absorb some of her deep stores of magic, easing the strain on her body as long as she can remain calm. 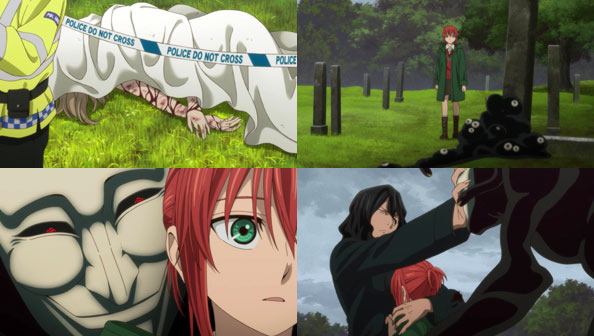 Of course, Chise almost constantly finds herself in situations in which it is very difficult to stay calm: news of a “grim” or black dog on church grounds; a corpse that looks decidedly like it was mauled by said dog, and in the cemetery, a creepy multi-legged monster with a face like a fresh-shaven Guy Fawkes mask. She is saved by the black dog, who assumes a human form.

When the man transforms back into a dog and passes out, Chise heals and stays with him. When Alice shows up and demands Chise surrender the dog, Chise uses her failed nightmare ward to knock her out then tie her up.

When Alice comes to, she tells Chise she needs the black dog as “material” for making a chimera, citing these as the “weird brat” sorcerer’s orders. Elias emerges from Chise’s shadow, having gotten the gist of Renfred’s dilemma (along with the reason he lost an arm).

But just then, out of the blue, the weird brat shows up, and attempts to kill Alice. Chise shoves her out of the way and gets impaled by what looks like a spiked vine or giant mantis leg. In either case, it looks like the kind of wound that would be mortal if the person being impaled wasn’t the title of the show.

So yeah, Chise isn’t going to die anytime soon, but she’s certainly in bad shape, and the sight of her getting wounded sends Elias into a rage unlike any we’ve ever seen from him, perhaps revealing a form more indicative of who—or rather what—he truly is, which most certainly isn’t human.

Sidonia sticks to its strengths—intricate space battles, mayhem, and impending doom, not comedy and romance—with an episode-long epic battle of adernaline-pumping perfection. G550 is gunnin’ for Sidonia, literally. Its kill or be killed, and the episode never lets you forget how thin the line is between life and death.

Tsumugi uses her man-made kabi claws to bust out of the trap the first wave of Gauna built around her, and in the process she seems to glean the Gauna’s intent for the humans, including her friends. Whether it was just another Gauna biological reflex in response to external stimuli, or a conscious, sentient effort to provoke Tsumugi, she reacts badly,  disobeying everyone’s orders and going on a destructive rampage of every Gauna in sight, despite being heavily damaged herself.

The deus ex machina has a screw loose, and it informs the overarching peril of the situation rather nicely. What ultimately finally stops her attacks is when Izana tries to go after her and calm her down, and gets heavily damaged in the process. It’s been a little while since pilots I actually knew and cared about turned red on the CIC board, so when it’s Izana’s turn my heart sank into my stomach. Thankfully, Tsumugi gets to Izana and agrees to retreat for now, for her sake.

The Guardes manage to take out the second wave of Gauna without Tsumugi’s help thanks to a shift to long-range tactics, and then enter ring formation to destroy G550’s core. But even this tactic backfires, as the equatorial trench they create is the perfect aperture for a massive Hyggs cannon the surviving Gauna fuse into. 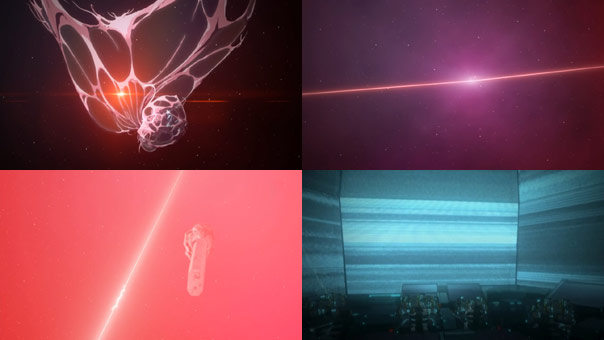 Sidonia is huge and slow, so I knew any beam launched at her would have to be somehow prevented outright, blocked, shifted, or absorbed by someone. In another case of the computer displays creating visceral reactions, the amount of red the damage analysis predicts makes it clear if none of those above things happen, it’s Game Over.

Tsumugi manages to deflect the beam enough so it misses Sidonia, but only by a few hundred meters to starboard. At this distance, the mere force emanating from the beam is enough to nearly shake Sidonia to pieces, and alarmingly, all the CIC displays go to static as the shock hits, and it was all I could do to pray those displays wouldn’t go dark, and that breaches wouldn’t occur.

With G550 charging for another salvo, and both Tsumugi and Izana unaccounted for, Nagate decides to rush in headlong and uses his engine pack as a precision projectile, causing a Death Star-style chain reaction that brings that sweet, sweet sound of Bubble Desintegration. Once again, Nagate one-ups Kunato and emerges the hero.

It’s a costly victory: Nagate and Izana are both found, but Tsumugi is in tatters, and Izana fears she’s dead. They didn’t lose a lot of Guardes, and Sidonia wasn’t seriously damaged and didn’t need to carry out emergency maneuvers, but with Tsumugi’s fate unclear and the Gauna stronger than ever, it’s no longer simply “nice” to have Chimera on their side; it now appears absolutely essential for the battles to come.