Now that she’s preparing for voice roles and singing like a professional should, Chitose gets way ahead of herself in a daydream where she, not Momoka or Kazuha, is the top star beloved by all whose fans wear robes that say “Chitose Is Life.” In reality, she still has a very long way to go, but as her brother suspected, her guts are helping to carry her along, making up for her lack of talent.

The anime she’s working on is seemingly doomed, as the first episode preview is replaced with a slightly altered repeat of the PV, as the first episode is nowhere near done and no one seems to be in a hurry to finish it. This ain’t KyoAni, folks. Though she’s nervous, Chitose is still able to wrangle the understandably frustrated crowd with her charms, as the five cast members sing the long version of the theme song.

It goes pretty well, but by the time the awful first episode actually airs, even Chitose has to struggle to find the good in it: adoring Twitter followers, another sign that she’s “WINNING” at being a seiyu idol. She knows how to be all buddy-buddy with Kuzu-P, but he’s already planning to use her and the others as a tool for recruiting more talent, all of whom will likely be so excited to be working, they won’t feel as Kazuha feels, that this all feels very stupid.

Senbongi Sayaka’s Karasuma Chitose continues to lead the way in Gi(a)rlish Number as a sardonic up-and-comer who is always taking the measure of people around her. That applies two her new co-stars Yae (see Chitose’s inner thoughts in pic above) and Koto (who has a Kansai accent and knows a lot about anime but doesn’t seem very “interesting” or “useful” to Chitose. That being said, Chitose never lets too much of her inner self spill out, so she gets along with both girls fine.

Unfortunately, I’m starting to feel like they’ve been tethered to a sinking ship, even though they can’t exactly turn down good voice acting work because the producer Kuzu is a buffoon who is almost totally non-detail oriented, even insisting “passion” is what’s most important in anime. Not, you know, silly little things like character design and animation quality.

Chitose, Yae and Koto team up with veterans Momoka and Kazuha for a kickoff event during which a very vague PV full of half-formed ideas is presented. Chitose helps keep the on-stage banter among the newbies interesting and the crowd engaged.

Kazuha is the most concerned about the fact the show they’re in doesn’t even have a key visual, but Momoka thinks the five of them should simply focus on doing the voice work and leave the other matters to those responsible for them.

The vets also file out, leaving the three newbies to celebrate a successful kickoff, at a restaurant, blissfully unaware of the mounting turmoil in the studio’s conference room.

Chitose was hoping to be the only heroine, and later, that they’d sing the OP rather than the ED, but she’ll adapt and work to distinguish herself under these revised conditions, all while never doubting for a second that she belongs here, and that she’s winning.

Zane here, first-time ABP writer, long-time watcher (I’m actually watching it a second time around, it’s so good), just sticking my head in to offer some thoughts on the final episode. Oigakkosan will be along with his assessment.

I can sum up this episode with the phrase “Tricen makes a PV (promotional video) for the park.” No evil wizard redux; no new park crisis. It’s essentially a means for the excellent sprawling cast to take a curtain call.

As both Kanie and Moffle note verbatim (proving that like minds often spar), Tricen can’t help but project his own bland personality onto the initial video. Kanie puts Sento in charge of helping Tri spice the video up, which they attempt to do by asking for everyone’s suggestions about what to put in the video. 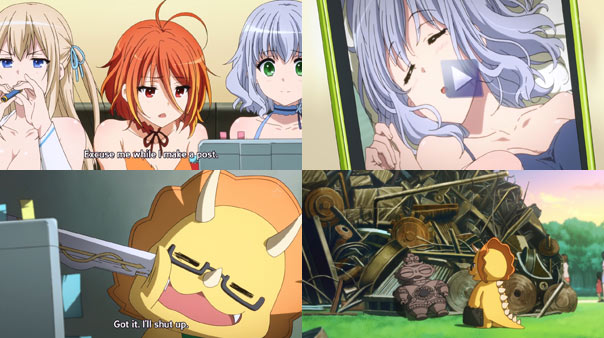 Tricen throws all this stuff into the video without any effort to mesh the wildly varying themes. Even as an art film, it’s a bit awkward. Then Latifah suggests he add video of the lower-tier cast members’ hobbies…and things get a bit weird:

Whoa. (For the record, I couldn’t stop laughing at this scene. Who would’ve thought the mute dogu would be the most visionary of the bunch?)

From Ashe’s skydive ironing, to Dornell’s dam enthusiast club video (and there are pictures of dams on the wall of his hideout way back in episode 5; nice continuity!), to Adachi’s footage of a horse giving birth, everything Tricen is given is put in, with no regard whatsoever for coherence.

Predictably, Kanie is appalled by the resulting ‘masterpiece’ even as Sento weeps from the emotional impact. Frankly, Kanie should have remembered that while he’s softened her edges somewhat, Sento is still an imperial guard, and the wrong choice to assist Tricen. Not that there was a better alternative!

Kanie goes with Tricen’s original milquetoast cut, which underwhelms the cast, who is miffed their suggestions weren’t included. But Tricen gets the last laugh when he tells Kanie he uploaded the ‘unofficial remix’ to the web, where it went viral.

There was thankfully no more Evil Wizard this week, but the possible negative fallout from the PV can’t be considered real conflict in this, the final episode. ABP seems to be running smoothly with Kanie at the helm and Sento by his side.

No, this was more a final check-in with the characters, who brought us to the table in the first place and kept us there with rapt attention as they worked their way through various dilemmas. I personally enjoyed this inconsequential but still entertaining epilogue.