Takumi suggests he and Ao study together some time, but Ao is against it because she knows what such things can lead to. However, Takumi says “pretty please,” so she grudgingly agrees, and orders her first pair of silky panties so that if and when Takumi makes his move, she’ll be prepared.

Then she goes to Takumi’s and they’re both alone together, and there’s never an if or when. One, two hours pass, and Takumi only seems interested in…studying. Even when they make a wager for the loser to do whatever the winner wants, he just wants her to make her lunch again.

This steams Ao’s beans, because she went out of her way to wear sexy panties for the occasion, and Takumi is so pure and dense he can’t take the hint that it’s okay for him to make a move. It either never occurs to Ao that SHE should make the first move instead, or she, like Takumi, is too inexperienced and timid and afraid of coming on to strong.

So Takumi fails to resemble anything like the crazed sex beast of her imagination, and ends up a lot more like…well, like her. Only he likely wore comfortable boxers with the knowledge she’d never see them, while she ends up with a stomachache due to being unaccustomed to low-riding underwear. If she wants…that from Takumi, simply waiting isn’t going to cut it. She’s going to have to say or do something, and deal however he ends up responding. 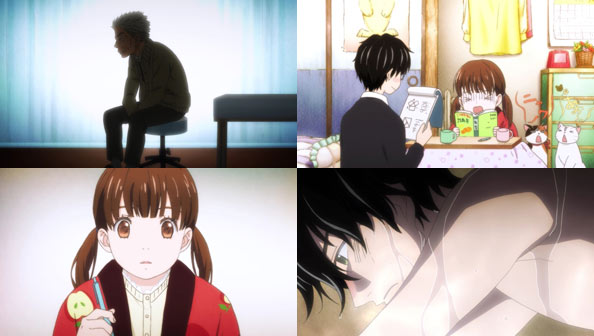 Gramps’ doctor is impressed with how far he’s been able to lower his blood pressure, especially when he used to say things like “I don’t need doctors!” and “I’ll die when like!” which are, let’s face it, Big Time Granddad things to say. But when his wife and daughter left him with “three little ones” he resolved to stay alive until they were all married off, which he realizes is a big ask considering Momo is still in preschool.

One of those little ones, Hinata, is making fine progress with studying, and Rei is putting on a tutoring clinice…until he tells Hina that Takahashi is going to school all the way in Shikoku, something she didn’t know until Rei told her; something Rei immediately feels very shitty for doing.

The news totally throws her off her studying game and into a spiral of despair over yet another person suddenly vanishing from her life. She stays out in the cold and catches one, and since Akari has to work late it falls to Rei to take care of her and assure her she’s studied enough, won’t forget what she knows, and will be okay in time for the exams.

That night, Hina can’t hold back the flood of tears from thinking about everyone who is or will soon be gone from her life. But with Rei there by her side, even to walk her to exams, she realizes that things aren’t all bad; for as many people who have left her life, just as many remain, like Rei, to help her up when she slips. She takes comfort in that.

She passes the entrance exams, which means in April she’ll officially be Rei’s kohai at his high school. While her aunt was initially very skeptical of a second-year high schooler spending so much time alone with her young and vulnerable niece, her fears are met with chillingly identical reactions from Akari and Gramps…Kiriyama/”the Kid” isn’t going to do anything weird. I mean, he’s Kiriyama/”the Kid”!

Indeed, even Hinata tells him he’s “like a mother,” to which he should say “what’s wrong with mothers? Mothers are great!” 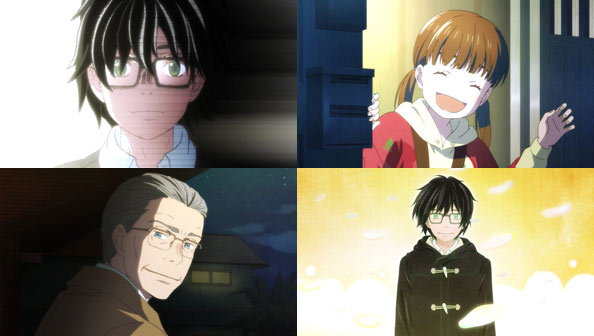 While very pure and oblivious to some if not most of what is said about him and Hinata, he knows one thing for sure: when he heard she wanted to come to his high school, he did everything he could to help her achieve that goal, and didn’t worry about whether that was right or wrong.

When she showed up at home with mismatched slippers, and stayed utterly true to her heart even in the face of gross injustice, she lit a light within him he didn’t have before. She made a part of him.

Then Rei gets a surprise of his own: his father shows up, having avoided demotion, which means they’ll both be in B-2 next period, and he wants to pick up where they left off…which is just fine with Rei. 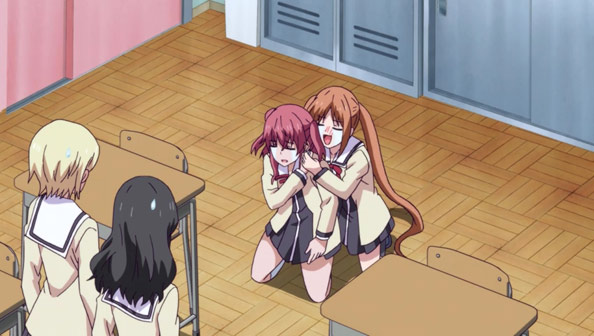 First up, Eimura again demonstrates that she’s the Worst Gal Ever by the fact she hasn’t had her ears pierced yet, and makes a tremendously dramatic meal over the fact that she’s about to.

Enter our Aho Girl, who at first has no idea why Eimura wants to pierce her ears, then lays out in great detail the very worst-case scenario, before offering her hands to steady Eimura’s. She manages to pierce one ear…I think? But Eimura decides to postpone the piercing of the other one indefinitely.

The next segment is Aho Girl in top form, as Yoshiko takes Dog for a ride and ends up in a manga-style race on a mountain road with a super-competitive motorcyclist who ends up lost in their dust. His serious commentary of the race is hilarious and the art is fantastic in its starkness and illusion of motion.

Yoshiko has both feet on the ground, in a sandbox, in the next segment, where she bothers the little kids again, this time by playing dolls with them. Yoshiko betrays her older years by making things between “Michael” and “Micca” get way too dark and real, but the girl runs with it and has Michael come back to life and live happily ever after, further baffling the lads. 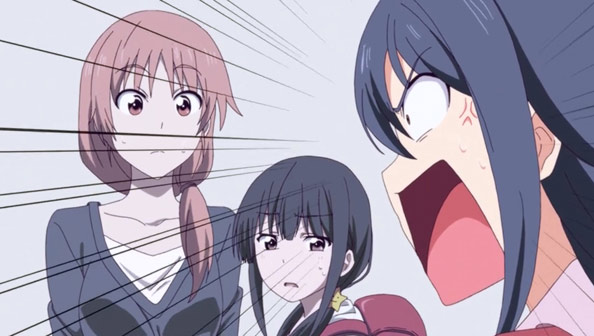 Finally, Fuuki tries to get closer to A-kun by befriending his lil’ sister Ruri, who is upset over having scored another zero on a test (further indicating Yoshiko’s influence on her). Fuuki is thwarted by Yoshiko’s mom Yoshie, who obviously has the inside track, having known Ruri and A-kun for years.

Before long, Ruri completely fades away in the midst of an increasingly heated battle between Yoshie and Fuuki, in which Yoshie unhooks Fuuki’s bra, then steals her panties to show Ruri that she’s a pervert; when Fuuki tries and fails to steal Yoshie’s panties, she ends up stealing Ruri’s, so quickly neither Ruri nor Yoshie noticed, and puts them on herself before Yoshie can expose her to Ruri.

It’s a very, er, wrong sequence, but in the end, Yoshie is humbled and decides she needs more “training”, giving their ridiculous exchange the air of a sincere martial arts duel. I sincerely hope another round is in the cards!

When Yoshiko volunteers to chair the cultural festival, A-kun is ready to let her fail so she can “get a sense of her own idiocy”, which he believes is more productive than letting Eimura (the gal) live out her pure festival dream of “coming together as one, doing all sorts of stuff, make it all awesome, and have a party after”. A-kun and Eimura verbally spar, with A-kun accidentally making Eimura cry…but everything she wanted to happen ends up coming to pass this week.

…Just not in the way she expected. Yoshiko convinces Eimura and her two gal friends to spend the night at school, but while they intend to work on the maid cafe prep, Yoshiko wants to explore the school (like the boy’s room urinals) and play video games until dawn, which is what happens. But rather than protest, Eimura is on board with all of it, and while they don’t get a lot of work done (or sleep), she does have a ton of fun.

The day of the cultural festival, Yoshiko spots Fuuki rejecting a boy, and immediately becomes his advocate. When she tells Fuuki to imagine how she’d feel if A-kun rejected her (a hilariously-portrayed what-if), Fuuki admits she’d at least want a parting kiss as a memory.

Yoshiko tells her girls want kisses but guys want a boob grab to “break the chain of sorrow”…and Fuuki almost allows it, not wanting karma to bite her back. Fortunately, A-kun walks by and the boob grab is thwarted, but the rejected guy does end up with Fuuki’s upskirt in his face…when she delivers a devastating surprise attack in her panic. 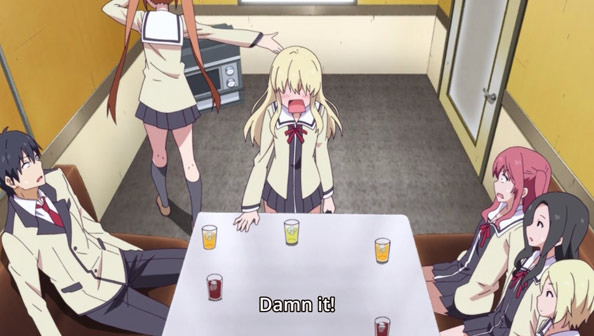 The festival wraps off-camera (good!) and we go straight to the party Eimura foresaw. It’s meant to be a peace summit organized by Sayaka so A-kun and Eimura can bury the hatchet, but they end up lobbing insults across the table.

Suddenly Sayaka slams her hand on the table and yells, seemingly having lost her temper…but it’s revealed their order got messed up and she inhaled beer fumes, making her an unreasonable, quick-to-tears drunk who nonetheless has a good point about A-kun and Eimura needing to knock it off.