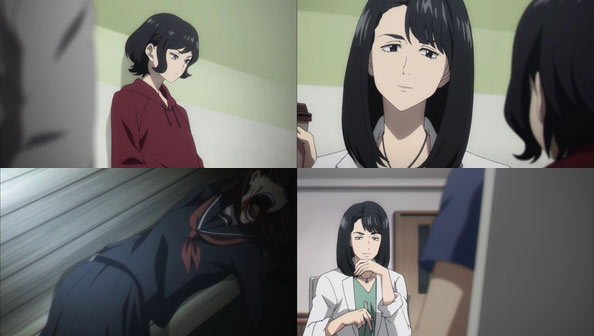 Kishima Nagi is on the mend, and wonders if her psychiatrist, Dr. Kisugi Makiko, thought her fits of pain were only in her head. Nagi doesn’t know that Kisugi discovered the vial of the mysterious drug Scarecrow used to heal her. Kisugi experiments on lab rats, but soon it’s clear she’s graduated to unwilling human test subjects, who are turning up all over town as the victims of a serial killer with a very specific method of ripping open the jaw and sucking out the victims’ brains. 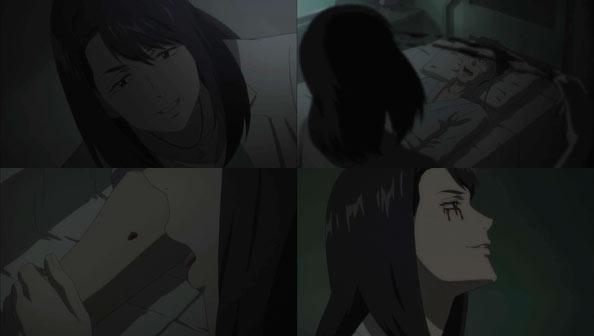 At night Kisugi roams the dark halls of the hospital, preying on patients by heightening their fear (she’s capable of seeing someone’s weakness the same way Jin could see their flowers) then sucking the fear-filled blood like a vampire. She revels in being able to rip out her own eye only for it to regenerate; clearly she’s her own test subject as well, and she’s downright drunk on the fear of others. 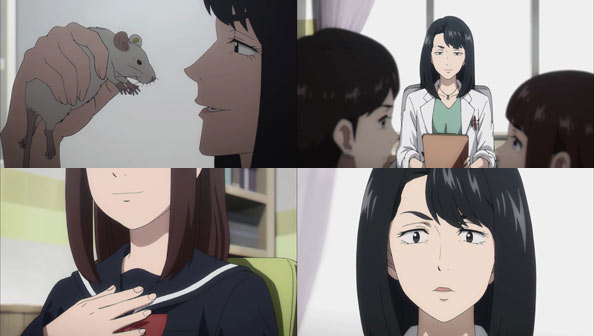 She determines that the best-tasting fear comes from those who’d normally have none, like bold young women, which is why so many of her victims are high school girls. But as a psychiatrist she is also considering using her talk patients as food/research fodder. One of those patients is a young Miyashita Touka, sporting long hair and flanked by her mother, who fears she has Dissociative Identity Disorder.

This confirms that while we enter the world of Boogiepop with Touka as a high schooler, Boogiepop has been showing up in her body since far earlier. Excusing Touka’s mother, Kisugi has Touka talk like a man, and before long, her other personality is out, and wastes no time describing who they are (neither man nor woman, for one thing) and what their mission is. 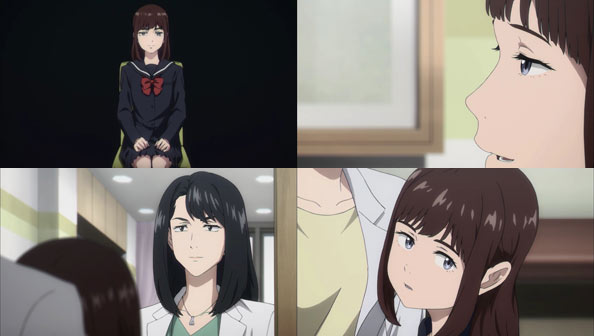 Boogiepop tells Kisugi that she’s a predator for people so normal it’s easy for them to be “set off” like fuses into someone who could be a threat to the world. Boogiepop exists to eliminate threats to the world without mercy. Their discussion puts Kisugi on notice as someone who should probably stop what they’re doing lest they incur Boogiepop’s wrath, but it may be too late.

Kisugi doesn’t seem willing or able to control herself anymore; she’s in too deep. Though if there’s a bright side to all this, it’s that she won’t end up killing Touka as she considers here; we know Touka will be fine, and that her “disorder” won’t be “cured”, nor should it be. So the question is, how will Boogiepop, possessing Lil’ Touka, take Kisugi down? Or will Towa, whose serum she’s messing with, do it for them?