Matei pays a visit to Arte to apologize for his rude comments. Especially once he sees her gorgeous portrait of Lady Sofia, he admits to harboring an “ugly jealousy.” Arte replies that if his jealousy is ugly, the jealousy she’s had for male artisans is ugly too. He urges her to always treasure the talent that comes from her unique position, and to continue to cultivate it.

Matei helps Arte realize that she has unique talent and value as a female noble artist, and she doesn’t want to become tied down by a patron just yet. On top of that there’s much she still wants to learn from Leo, so she turns Yuri down and prepares to return to Florence. Yuri respects and even admires her decision; she and Katarina leave on good terms as well, committing to being friends from now on and vowing to write one another. 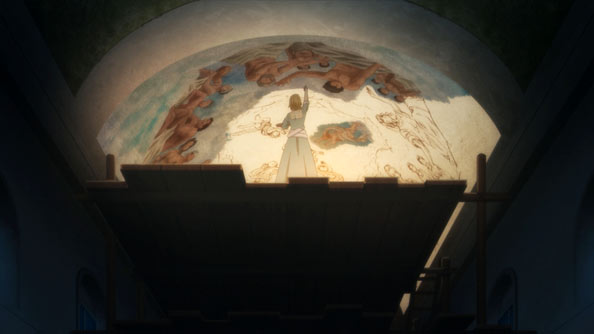 Upon returning to Florence, Arte finds Leo’s workshop empty. Darcia informs her that he’s come down with a fever and is resting at Ubertino’s house. Ubertino believes Leo will be fine, but is more concerned with the fact the ceiling mural he started won’t be finished by the Easter deadline. As a member of Leo’s workship and with Ubertino’s approval, Arte rolls up her sleeves and vows to complete the ceiling herself.

When the timeline proves impossible for any one person and Arte nearly collapses from exhaustion, Angelo steps in to assist with the painting while Darcia resolves to keep them fed and healthy. Eventually a group of other apprentices Arte has met and befriended join the team. With all the extra manpower the ceiling is completed on time.

Leo and Arte don’t end up meeting until the mural is unveiled, and while her “light calculations” are still in need of some seasoning, he’s nevertheless grateful for her help. When he asks why she came back, Arte says she wants to paint paintings that encourage people, like the triptych of the Virgin Mary encouraged her while she was in Venice. Leo’s glad to have her back, even if he’ll have to get used to the extra noise and energy all over again.

Finally, Arte’s mother accepts an invitation to the unveiling, and shows that she’s big enough to admit when she was wrong. She was sure that despite her late husband’s encouragement, a woman only had two paths: marriage or the convent. Arte proved she could forge her own path, but she didn’t do it alone, and made sure to honor everyone in her life—including her parents—who aided her in her journey by painting them into the mural (in heroic garb, of course).

It’s a touching gesture, and a fitting end for an anime with a lovable heroine in a very unconventional time period and setting, but a timeless message: Believe in yourself and your abilities, work your ass off, rely on friends and allies when needed, and you’ll eventually convince the skeptics and soar to success. Brava, Arte!

Having made excellent progress with Katarina, Arte gets back to the official reason for coming to Venice: Lady Sofia’s portrait. Arte also paints a portrait of Katarina, and accompanies her to the workshop to learn more about artisans first-hand.

While there, the apprentice Matei states that he “envies” Arte for being an educated noblewoman and an artist, and when she sees his battered hands, this compels her to step up her work considerably. Aside from her modeling sessions during her portrait, Katarina never sees Arte.

She stays up all night sketching and studying, not eating any the food Daphne brings. After being told she was the wrong gender for the world of artisans, suddenly hearing the opposite lights a fire under her.

As one would imagine, this eventually catches up to Arte, and sure enough Daphne and Katarina find her passed out from overwork and exhaustion. For this, Yuri gives her a very stern, businesslike talking-to that amounts to “I don’t care about your problems, don’t make my niece cry again.”

She eventually recovers and finishes Katarina’s portrait, and Kat is so bowled over by its quality she rushes back to the workshop to show Matei that Arte isn’t just an educated noblewoman who paints, but an immensely talented artist in her own right.

After meeting with Matei Arte must’ve thought she wasn’t dedicating enough time to art and was wasting her privilege. Of course, that’s rubbish! We’ve seen Arte work till she literally vomits; no one, including herself, can call her a loafer or coaster.

Both Arte and Leo also have moments this week when they truly miss each other (though Leo puts up a stoic front as always). Presumably Arte will return to Venice, but then again, perhaps not: Yuri offers to be her full-time patron going forward if she remains in Venice permanently.

That means a steady wage and a comfortable life, neither of which any woman of any station can take for granted in these times. If Yuri and his sister-in-law are satisfied with her portraits, perhaps there’s nothing more Leo can teach her she hasn’t already learned during her solo time in Venice.

We know Katarina doesn’t want her to go, but what does Arte want? Is her personal and professional bond with Leo worth declining a potentially once-in-a-lifetime offer? (Leo would probably say no way.) Yuri gives her until she finishes Sofia’s portrait to decide. I wonder which path she’ll choose!