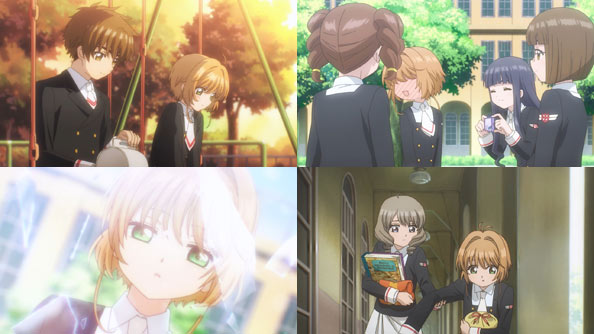 In the aftermath of the Cake Roll Incident, Sakura (and Tomoyo) have to stay quiet as their friends ponder what the heck happened to all the ingredients for their home ec class, while both Sakura and Akiho try not to blush when remembering when they gave their cake to the people they care about.

Sakura also gives Akiho Rika’s gorgeous pop-up Alice book, which Ahiko only accepts as a gift reluctantly, and which indirectly leads to a Sakura daydream in Clock Land right in front of Akiho. But since Akiho remains conscious the whole time, they don’t get the chance to “meet” one another there; she merely stops Sakura from tripping on a step.

That night (and considering the height of the moon, it’s fairly late at night for dinner, if you ask me!) as Akiho places the book on the “Alice” shelf of her family’s library, Yuna D. Kaito sidles up to her once more, reiterating how pleased he is that Akiho has gotten so close to Sakura, and hopes she gets even closer. Gee, I wonder why?

Meanwhile, Sakura, Tomoyo, and Syaoran are at the Tsukimine Shrine, the site of the very first Clow Card Sakura captured (“Fly”), leading her to reminisce on how talkative and pushy Kero-chan was back then. They’re there because she sensed another card and would rather deal with it at night. Tomoyo provides a fire-themed costume, while Syaoran is there for backup.

It turns out Sakura needs it, because Aqua, her initial gambit against the new card—a vicious firebird—proves ineffective. Syaoran has Sakura launch into the air with Flight and standby while he uses…some power he’d rather not tell Sakura about in order to bind the firebird and enable Sakura to secure it.

WIth that, she’s gained a third elemental card after wind and water (ice, which one would have thought would be more effective against fire, must be covered by water). It’s yet another colorful, gorgeously staged and rendered battle in the best traditions of CCS. 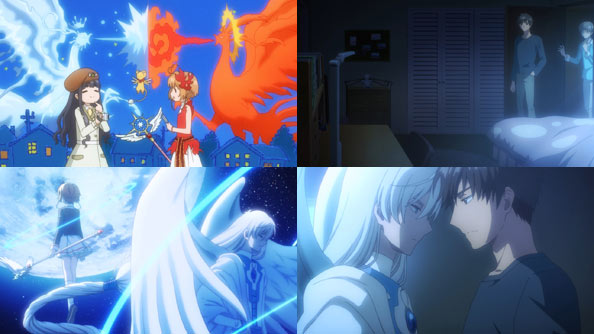 After some post-game play-by-play, the trio prepare to return to their respective homes. Sakura took steps to ensure her absence wouldn’t be noticed, but her brother Touya enters her room to find she’s not there (he’s studying late with Yukito and must have sensed something amiss).

Yue emerges from Yukito to tell Touya that Sakura is safe and on her way back soon, then comments on how Touya’s powers are returning. Touya is coy about how he’ll used them, except to say that he will do everything in his power(s) to protect Sakura and his family, and asks Yue to be patient. Personally I’d love to see these to face off against Yuna D. Kaito.

Barring another season (or a wrapping OVA or movie), Clear Card saga ends in just four episodes. Yue isn’t the only one who has to be patient!