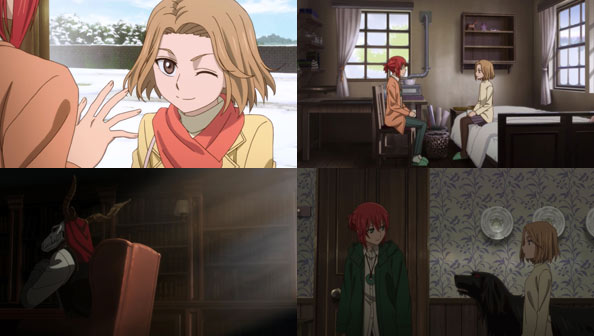 The day after Christmas, Stella shows up with sweet treats to hang out with Chise, as promised. Chise is so unaccustomed to friends as we know them that not only did she not expect Stella to come, she doesn’t quite know what to do.

Stella, who we learn is just ten but very mature for her age, tells her not to sweat it; being friends is nothing more complicated than being with someone, talking and listening to them. It shows how far Chise still has to go, and how little Elias can help her.

In fact, having Stella around is apparently too much for Elias, who isolates himself in his study then storms out of the house without any warning. Worried, Chise ditches Stella to go after him, transforming into a wolf to keep up. Elias traps her in the shadows and binds her with tentacles.

Elias doesn’t say much, but he does say that Stella’s presence made him want to leave the house,. He felt better when Chise chased him, but couldn’t stop running, and now he can’t seem to let her go.

Meanwhile, back in London, Stella and her family seem to be being watched/stalked by Cartiphilus and Ashen Eye. What the heck to they have planned?

Chise manages to fire off a flare with her wand, and Ruth manages to find her when a Fae daughter of Titania reveals the shadow where he’s holding her (she helps because they gave her a proper Yule offering).

Chise puts a knife to her throat, which causes Elias to immediately release her. He’s rightfully ashamed and contrite, but Chise forgives him and suggests they go home and get some sleep.

Elias, as we know, is even more emotionally stunted than Chise, lashing out when he doesn’t get his way like a small child. Here’s hoping Elias eventually learns how to control his wilder instincts whenever faced with a perceived slight. 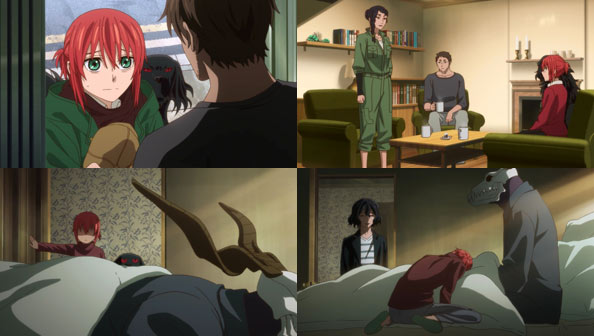 However, Chise accidentally puts Elias into a deep sleep when she sings him a lullaby, and she heads to London to seek the aid of Angelica, meeting her non-magical husband David in the process.

David lends Chise some perspective as someone who knows he doesn’t have all the time on Earth with his wife and daughter he might like, but that he intends to make the most of that time, and so should Chise.

Chise returns home with a recipe for a potion that will wake up Elias, and it works like a charm…but she’s so exhausted from her ordeal that she immediately passes out beside him, leaving Ruth to explain.

Meanwhile in Dragonland, some poachers apparently hired by Cartiphilus(?) try to capture two of the young dragons, but they’re thwarted by a pissed Lindel. Is there a connection to what Carty was doing with Stella in London and the attempted dragon theft here? To be continued.