Shimamura isn’t sure why Adachi suddenly ran away from her, but it looked to her like she had something to say but couldn’t say it. Unlike Adachi, who is increasingly obsessing over Shimamura in her inner thoughts, Shimamura is more introspective about herself, whether it’s the way she keeps “having regrets” or starting to “catch on to [her] lack of interest”.

Is Shimamura naturally just not interested in anything? Could Adachi be changing that part of her? When Adachi is absent for school and doesn’t answer her texts, Shimamura heads to her house. On the way, she meets the astronaut girl without the spacesuit, who thinks it’s “fate” that they keep meeting. Thankfully the spacegirl splits—I still honestly don’t know what her purpose is—and Shimamura’s unannounced visit is rewarded by seeing Adachi in her jammies.

Shimamura agrees to Adachi’s request to go out on Saturday—though Adachi’s original intent was to ask Shimamura to formally go out with her. Unfortunately the spacegirl is already with Shimamura when Adachi arrives, and proceeds to be a glittery blue-haired third wheel the whole time. Due to her little sister-ish size and demeanor, Shimamura can’t ignore the spacegirl’s attempts to grab her attention, which means Adachi gets less attention.

Moreover, the fact Shimamura so readily engages with the spacegirl makes it seem to Adachi that she’ll “take care” of anyone small and cute—including her—without thinking much of it. Adachi is thinking very much about Shimamura and Shimamura only, yet Shimamura is cognizant of everyone she spends time with.

That leads to a somewhat dark ending where she admits she allows “pieces” of herself to chip off in an attempt to keep herself “afloat”. These are the things she should be telling Adachi! I wish spacegirl would either explain her business with Shimamura or go away and give the main couple some space. 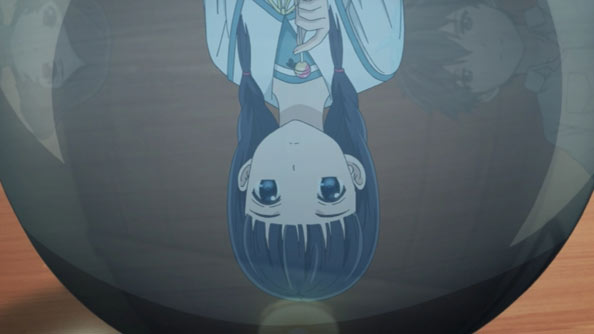 If you’d have told me prior to this week’s episode that we’d not only go back to Asai and Haruki’s first job as high school service club members, but that that first job would involve a student stuck in the reflection of a marble, I’d have thought you were off your rocker. But that’s Sagrada Reset for you: full of surprises and unapologetically weird in its execution of those surprises.

The non-Patema, yet still Inverted Sera Sawako serves as a fresh lens from which to view our lead couple, and she’s candid in her assessment, as you can see above. But she doesn’t think that’s a bad thing, just as she’s not particularly panicking about being stuck in a marble’s reflection, despite the inconveniences. 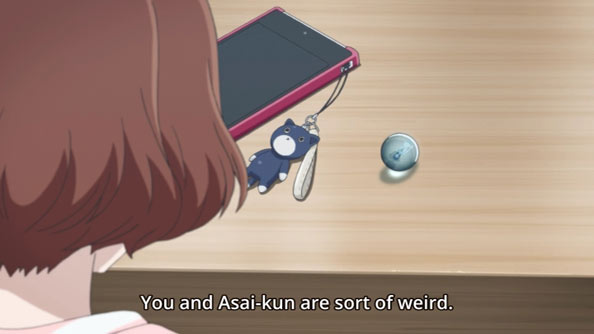 She even inadvertently gets Haruki to start using the same vocal patterns as Asai, which Sera finds even weirder, while Asai can see the upside, but would rather Haruki spoke like Haruki, which was a clever (if oh-so-subtle for a non-Japanese speaker) bit of voice acting by Hanazawa Kana.

As this is the first job, it’s not a particularly difficult one, and certainly less bloody than the one involving Murase later on. They only need one reset, and even though Tsushima tells Asai to reset immediately, the fact they were to meet with Sera-in-the-Marble (during an expensed meal) tells Asai that Tsushima is hoping the duo will do more, and they do. 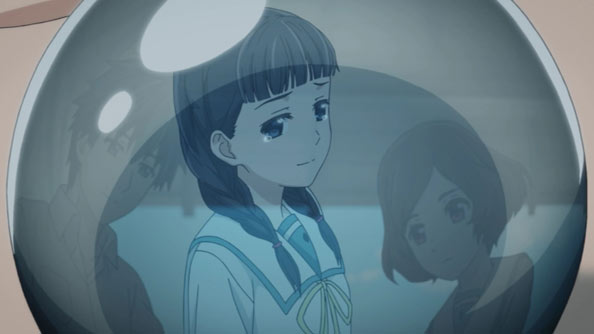 That includes contacting Sera’s middle school friends and learning her unwanted nickname from then was “Student Monitor” due to her perfect attendance and penchant for warning students who broke the rules. It all stems from a conversation she had with her elementary school teacher about the “pure object” within her that lets her see only pure things.

Sera’s ability is to transport her consciousness into the reflection of something pure, but Asai surmises the ability only activates when she desires to do something impure—like not worry about being late for the opening ceremony. In exercising her right, nay, responsibility as a youngster to be irresponsible at times, she literally and figuratively ends up in an stange, inverted new world, and she doesn’t really like it. 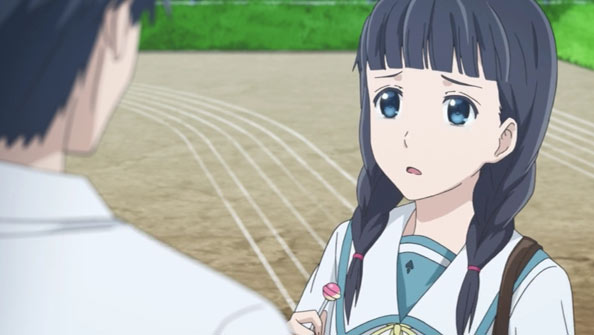 Asai also picks up on the fact that despite the strife it may have caused her, Sera wants to stay true to herself, and continue to have that impossibly “pure object” exist within her. In that regard, her foray into the marble is almost a punishment for not being true to herself.

When Asai tells Haruki to reset, it’s at the very last moment, once he has all he needs to resolve Sera’s predicament. The next time she spots a marble in the street, Asai beats her to it, so she’s not late for her bus, and arrives at the ceremony on time.

Still, she heads to the field instead of the auditorium so she can eat a   lollipop, which she assumed was against the rules (causing tears to well up), only to learn from Asai that it isn’t (since they’re technically between classes).

Asai isn’t 100% sure Sera will never end up in a reflection of something again, but he and Haruki did as much as they could, and she’s out of the marble, so it’s first mission accomplished. And just to bring it all together, as the cold open showed, the one to lead Murase upon her introduction to her class in September is none other than Sera Sawako; both of them beneficiaries of Asai and Haruki’s services. 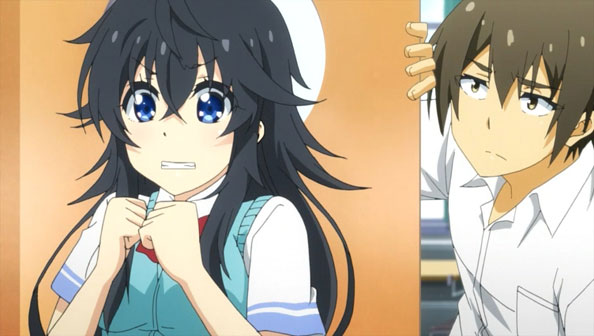 Turns out Sette-san isn’t Nishimura’s sister, but his pink-haired classmate (and friend of Segawa’s), Akiyama. She teases both him and Ako by glomming on him in class, but she causes a lot more trouble than she expected, as she creates an environment Ako no longer feels comfortable in. She even suggests the club play an FPS unrelated to LA, likely to avoid Akiyama/Sette. 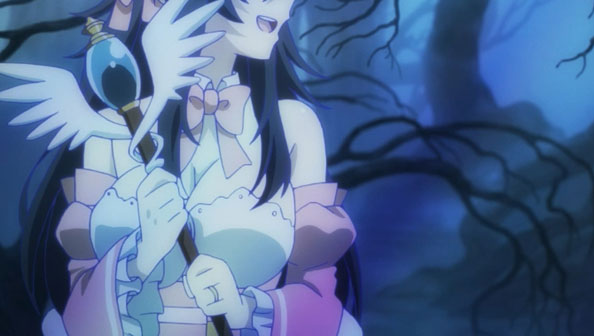 Ako then recedes again from school life, vowing only to live in LA, where she knows Rusian is his wife, if nowhere else. At long last, Nishimura’s wishy-washiness and failure to clearly define his real world relationship with Ako has been laid bare, and this is the sum product: an Ako more reclusive than ever, who wishes to “reincarnate” into someone cooler. 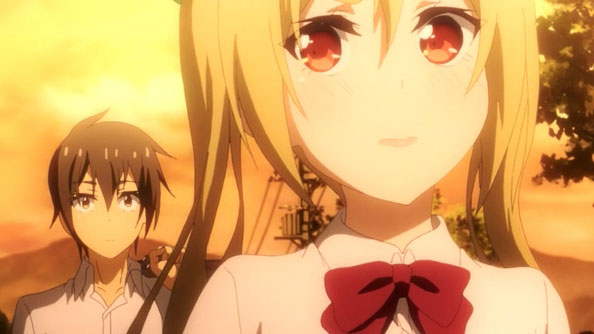 The club pretty easily figures out that Ako herself is caught up in a spiral of stubbornness and a desire not to lose further face, and that Nishimura is the only one who has a shot to bring her back to school. While walking home with Segawa, she relays to him how important he was to Ako, both in the game and in her life, and how she, like Ako, wouldn’t mind spending a good long time with Nishimura…gaming, of course. Just gaming. As usual, Segawa fools precisely no one but the guy she’s trying to pretend she doesn’t like. 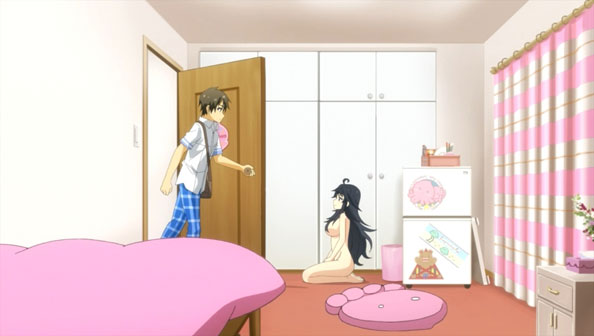 When he arrives at Ako’s house, Nishimura is confronted by Ako’s mom, who looks more like an equally attractive older sister and is delighted that Ako’s “future husband” has come to sort her “problem daughter” out. She then shuffles off to work, leaving him with the key to Ako’s room, of all things.

When he enters, Ako isn’t ready for him, being in her underwear and all. When she tells him she is ready and he can come in, she’s totally naked, revealing her and Nishimura’s definitions of “ready” in this instance differ greatly. She eventually gets some damn clothes on, however, and to her surprise, Nishimura isn’t there to drag her back to school; he’s just there to play LA with her. 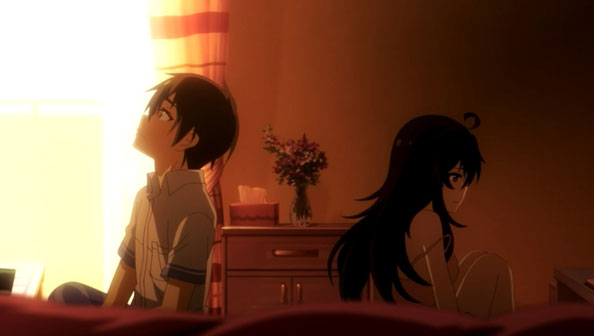 After a day of this, during which they were supposed to be at school, Nishimura essentially proposes mutually assured destruction: if Ako can stay home forever and never go to school or see any of their friends, so can he, and whatever fallout there is from that, so be it.

While I kinda doubt Nishimura’s parents would allow him to ruin his chances of getting into college or securing a good job, Ako is touched by Rusian’s devotion. The knowledge that he’d stay home with her forever if that’s what she eventually decided gives her the strength to tough it out at school with him.

Once she’s there, Akiyama mends fences by proclaiming to Ako’s peers that she has a dutiful boyfriend who visited her when she wasn’t feeling well. That’s a narrative Ako can get behind. Do I buy that it’s enough to mitigate all her other mental and social issues? Not really. Is Nishimura now Ako’s explicitly public boyfriend? No. Is that fundamental ambiguity a problem going forward? Certainly.

Furthermore, the last few episodes have felt like slightly-tweaked versions of the same story, beginning and ending in virtually the same space. Characters can talk about Ako “progressing”, but that doesn’t mean it’s true.

And everyone’s too…nice. This is high school, where are the “normie” antagonists? Those issues, combined with its Thursday night time slot (my movie night) and lackluster production values, are making this a hard show to stick with.