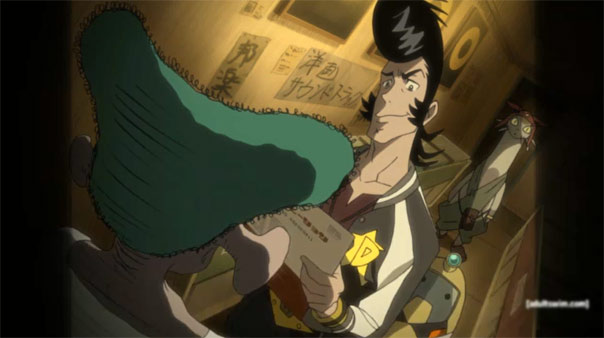 This week’s episode, centered on an intergalactic dance contest, doesn’t come close to the greatness of last week’s mind-bending adventure, and it was never going to. Granted, I watched this episode in English, which makes the dialogue sound more forced to my ears, regardless of the language it just didn’t have as strong a story, and seemed more annoyingly self-referential than usual. 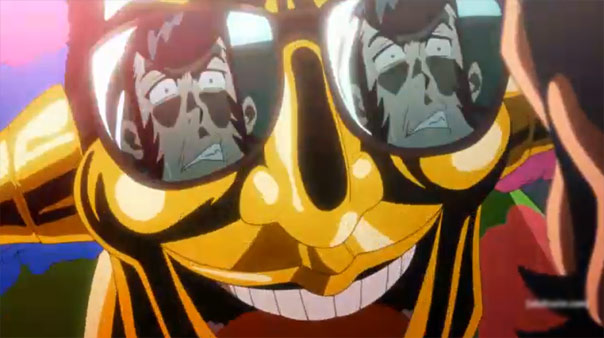 As usual, things start out small, with QT learning about said contest, with a first prize with far too many zeroes in it to be considered legit. Dandy likes to dance, so he doesn’t need much convincing, so off they go to “Planet Grease” (groan), which seems to have fallen on hard times. The only store that looks open in the central ghost metropolis is a record store, where Dandy buys Chekhov’s LP. 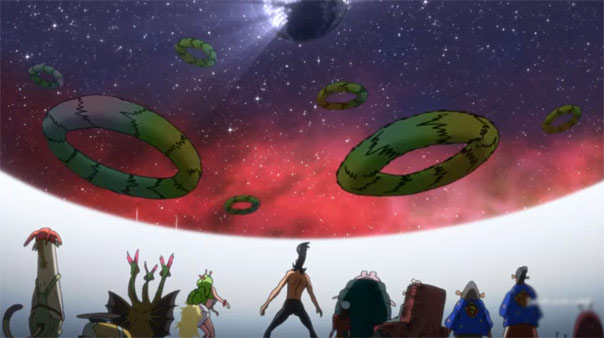 Then they find the Planet Chief, who laments that there’s been no contest for centuries,ever since the crucial “Danceinians” went AWOL, and his own ma has been in a coma since that time. The Chief gets a look at Dandy’s ass and convinces him to pretend to be a Dancinian to draw a crowd for a new contest, which they’ll fix so Dandy wins, precluding the need to pay out the prize they don’t have. 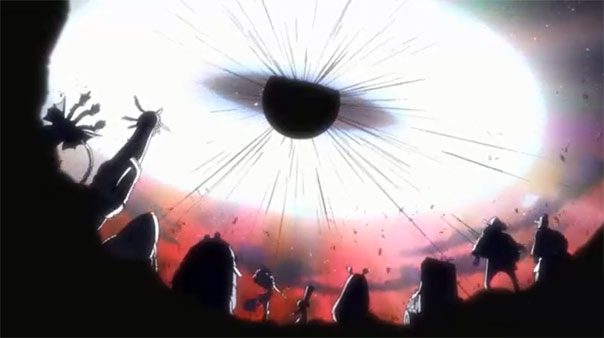 The ruse only attracts a half-dozen strange alien dancers of all shapes, sizes, colors and styles. It also attracts “Tom Travolta” (groan), a gold-plated, afro-adorned alien with a ring-shaped ship not unlike those of the Danceinians of yore. He steals Dandy’s thunder, and Dandy decides to play Chekhov’s LP (ingeniously using QT’s wheel and Meow’s claw as a turntable). The very un-disco like orchestral music has the affect of accelerating time to a ridiculous degree, until Dandy & Co. are dancing bags of withering bones. 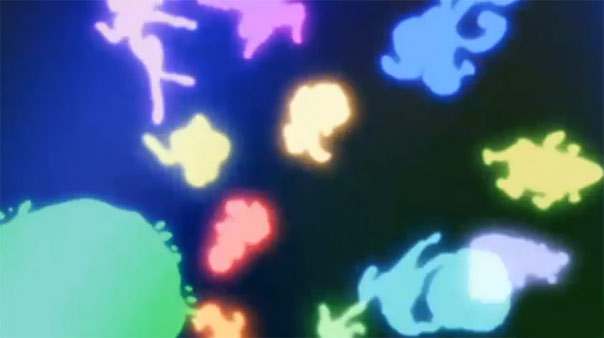 The lichens (first explained early on by the narrator) then start to dance and grow themselves into giant glowing rings: turns out the Dancinians weren’t aliens at all, but a natural biological function of the planet. When their energy merges with Dandy and Tom’s dance-off basically obliterates the planet (and Dr. Gel and Bea in orbit); the episode isn’t really interested in explaining it further than it’s another example of the ever-turning wheel of birth, life, death, and rebirth. But hey, Dandy at least managed to wake an old lady up and bring a smile to her face; in that regard, revering to amoebae isn’t that big of a deal.