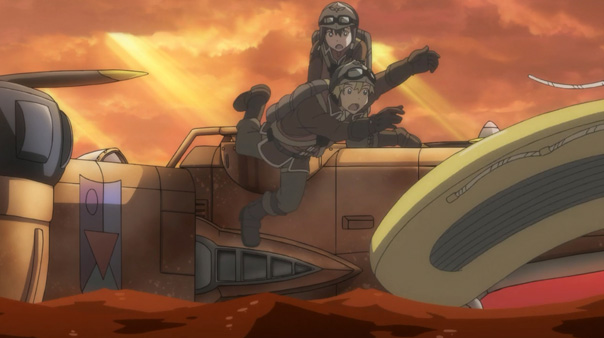 With Kal and Claire lost at sea and a worried Ariel waiting at the air base for his return, there’s not a lot for anyone to do in the present but wait out the storm…and think about the past! We have to credit the show for giving us an unforced, logical vehicle for conveying a good amount of backstory. The episode gave us fresh insights into several characters and built up interest in the events to follow, while being entertaining in its own right.

Ariel’s friends stay by her side as she waits, so she tells them how her dad came home one day with this blond kid and announced she and her older sisters had a stepbrother. Not surprisingly, Ariel is initially unaccepting (especially as he’s exactly one day older than her) but eventually finds a place in her heart for him, as proven by her intense concern for him in the present and rush of emotion when he returns safe and sound.

Kal certainly couldn’t ask for a better person to be stranded with then the girl he likes. The storm looks pretty precarious, but eventually the seas calm, the two fall in the drink trying to drain the dinghy and have to strip, and even snuggle up for warmth when night comes, with only the occasional bout of embarrassment. For her part, Claire also seems to enjoy having Kal as her fellow castaway-for-a-night, at least until he picks up the story where Ariel left off, revealing more details about himself in hopes of learning more about Claire in return. But the more Claire learns about Kal, the more worried she gets as she connects the dots.

Kal is looking more and more like the crown prince of Balsteros rumored to have snuck aboard Isla for revenge against Nina Viento. When they return to home and Claire quickly conveyed to her manor where maids strip her of her flight suit and transform her into Nina Viento, we’re left unsure whether she’s upset at the prospect of Kal being the prince because of how it will affect their friendship, or if she’ll feel compelled to kill the last “wicked” la Hire in order to complete the revolution. In any case, Kal is right about he and Claire being alike in at least one way: both are hiding their true identities from the other.

While he’s still quite young, Kal-el Albus has been through a lot in his life. By cruel fate he happened to be the last Crown Prince of the mighty Balsteros empire when it was overthrown by a populist uprising. His father the emperor was guillotined, and the last he saw of his mother, she was being carted off to her death. Her mother, a strong, fiercely kind woman despite her lofty status, begged her son to forgive those who caused him pain and grief, and not let hatred consume him.

In an act of kindness, the warden allowed a commoner to smuggle Carl out of the prison. Carl La Hire officially died with his parents, while Kal-el Albus was born. But he never forgot the girl whose mythical powers of wind manipulation proved decisive in the coup d’état success: Nina Viento. Ignoring her mother’s dying wish out of outrage she had to die at all, Kal has vowed never to forgive Nina.

One would think being the youngest member of a royal family when it meets its demise would be enough to endure, but the universe apparently has more in store for Kal. That’s because the girl he fell for the first day he arrived on Isla; the girl he spends most of his days with training in the skies and enjoying meals together; has a secret of her own: she’s Nina Viento. She also seems to be coming around to realizing who Kal really is before he comes around to realizing who she is.

There’s certainly a foreboding quality to the way the adults of Isla are feverishly whipping the students into shape for a still as-yet unknown threat on the horizon. But for the moment, we’re more interested in what will become of Kal and Claire once their secrets are revealed. We’ve seen Kal’s side of the story, but we’re certain there’s far more to Claire’s side than “She’s Evil.” After all, she was just a kid back then, too.