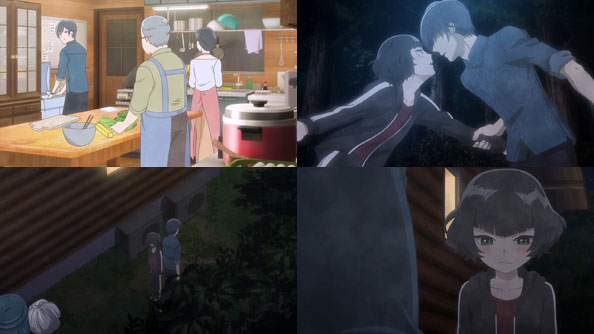 At the inn where he was extorted by Hitoha to take the Lit Club, Yamagishi-sensei is perfectly content to spend the evening with his folks, until he’s confronted by Hitoha in a particularly frisky mood. Forget her literary ambitions, she just wants to get with Milo-sensei, period. But thank goodness, he says four words that start to restore my faith in him: “Will you please stop?”

Sure, he’s pretty mean when he laughs at her inability to handle an imminent (but ultimately aborted) kiss when she was talking big about letting him lift her up by her thong and toss her to the floor. And when he tells her not to “bite off more than you can chew.” Hitoha may consider herself “a wretched sight,” but the alternative—if Milo-sensei had given in—would have been far, far worse. 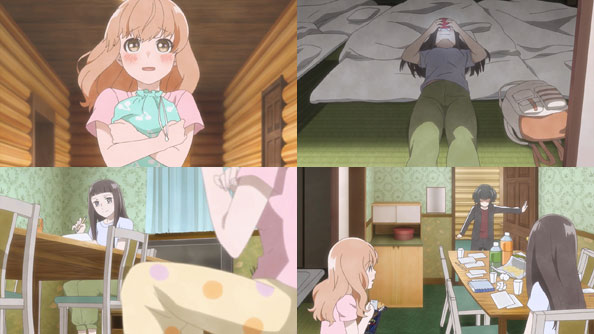 As Momo withdraws from the baths, she can’t get the image of a totally naked and uninhibited Niina out of her mind, eliminating any doubt that she has a crush on her. Not only that, when Sugimoto RINEs her with a number of in-your-face stamps enthusiastically inquiring about how she’s doing, Momo almost seems resentful—how dare you, vapid boy, try to occupy headspace I’d rather have occupied by the fair Miss Sugawara?

Just before Momo returns to the bedroom, Rika is also exchanging innocuous texts with a boy—Amagi—the difference being Rika is loving every moment of it. Still, not so much that she’d let Momo know, as she rushes back to the brainstorming table. Momo muses that the idea of guys being simple and shallow is “an urban legend in itself,” and wonders why girls are supposed to couple with them instead of what she deems to be simpler girls she finds cuter.

Rika initially believes the two of them are far apart when it comes to how they feel, but in reality, they both liken how they feel to the bittersweet taste of a dark chocolate Pocky. They’re both interrupted by a rejected and thoroughly pissed-off Hitoha, who barges in with an urban legend about sweethearts wearing matching thongs…not knowing that might actually work for someone like Momo! 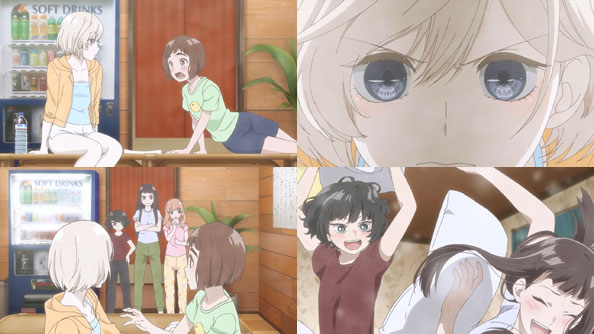 While the nature of the distance may vary, the love interests of all five girls are far away. Niina and Kazusa are unique in that they likely share the same love interest. It’s Niina who is there when Kazusa comes out of her overheated state, which is really for the best, as Niina gets to instigate the fight they really need to have in order to move forward, either as friends or something else.

The other three interrupt the fight, in part deeming it unfair due to Kazusa’s heat-fatigued state, but the five come up with a solution that serves everyone: a lively, no-holds-barred pillow fight. It’s a wonderful, semi-cathartic release, and thankfully Yamagishi-sensei has precisely no part in it whatsoever, keeping a distance and letting these girls in their savage season have it out with one another in an aggressive (fight) yet gentle (pillows) way. 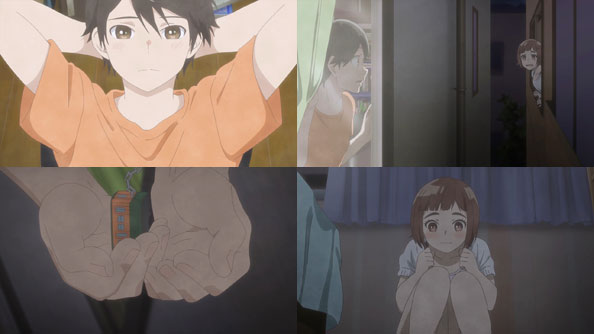 The night Kazusa returns, she has dinner with Izumi’s family, but Izumi himself isn’t present. In another beautiful sequence, the two end up encountering one another from the windows of their respective bedrooms—a cliche to be sure, but an effective one in this case, especially as both had just been thinking of one another; specifically the fact they like one another.

Having learned a lot from her trip and gained quite a bit of confidence and courage, Kazusa draws on what she and only she knows—that Izumi is particularly into retro trains—and tosses him one in the form of a keychain. Izumi first thought of Kazusa as a girl when he could throw a baseball further than her. But this time, both the keychain and her feelings make it to him. It’s a small step, but definitely one in the right direction. 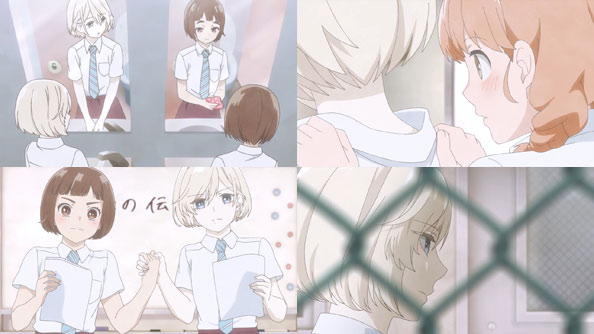 Back at school, Kazusa makes sure to apologize to Niina for being presumptuous about her stealing Izumi, but does so under the impression Niina has no interest in Izumi, which is actually just another presumption on her part! Ironically, Kazusa takes another confident step in volunteering to be the role of the girl to Niina’s boy in the lit club’s cultural festival performance.

As Momo adjusts Niina’s costume and blushes at the sight of her nape, and Rika continues to flush her relationship with Amagi down the toilet, Kazusa continues to reiterate in her head how she loves Izumi, and has always loved and treasured him back when she was his big-sister figure. But while Kazusa has probably never been more at peace, that peace is built on shaky ground. 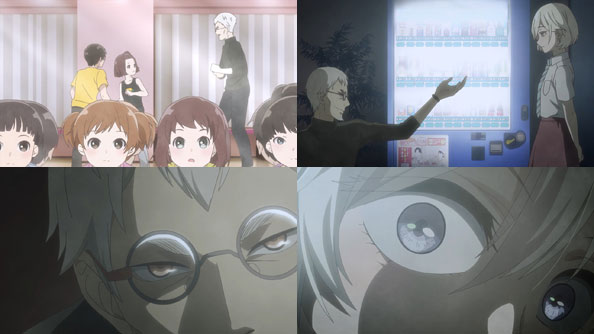 As Kazusa confides to Niina that she’s just about ready to confess her feelings to Izumi, Niina is not quite ready to concede Izumi to her so easily, though she might ultimately do so out of respect for their friendship. Where she goes wrong is seeking advice from her middle-aged pedophile former acting coach Saegusa, whom she visits just as he’s calling his latest prized talent “boring”…apparently for being so obedient.

Saegusa doesn’t want to witness obedience, on the stage or off it; he wants to see rapture; the explosive moment when a girl spreads her wings and takes off, transforming into a woman, even if that woman holds no interest for him beyond the “final moment” of transition.

With that in mind, and considering his loyalties lie nowhere else, he urges Niina not to be boring like his young student, but rather to damn the torpedoes. It’s a heartbreaking scene, not least because it’s quite likely Niina will do whatever her old mentor says, no matter how much it might hurt her and/or Kazusa.

But like Momo’s near-total disinterest in boys, Rika’s near-total inability to be the girlfriend Amagi wants, Hitoha’s near-total commitment to pursuing a forbidden affair, and Kazusa’s near-total confidence in her love for Izumi, Sugawara Niina is beholden to the road paved by the sum total of her life experiences thus far.

As much as she might want to, she has yet to escape Saegusa’s influence, and can no more turn off that road than Momo can start liking boys. And so, it seems a war with Izumi is inevitable—and no longer the kind with mere pillows.