After beating the crap out of a metal pole (and scaring off a couple dudes who were going to chat her up) A frustrated Ao retires to her room to study. The subject: Takumi, of course! Specifically, why, despite all of the compromising times he could have made a move on her, including when they were alone in the ocean.

After imagining their roles (and genders) reversed, and breaking her mechanical pencil agonizing over it, she gets a text from Takumi inviting her to watch his soccer game. Then it dawns on her: he lacks the stamina to do what she wants him to do so she can reject him!

She accepts his invitation, and prepares a magnificent multi-level bento packed with aphrodisiacs, including oysters, truffles, and eels. The plan is, she’ll feed him the stuff that will turn him into a savage beast that can’t keep his hands off her, and she’ll reject him fair and square, leaving her free to study again.

Of course, it doesn’t go as planned. While Takumi loses the game, his spirits are immediately raised when he sees Ao’s bento. Little do either of them know that Ao’s pops spiked the eel with one of his patented “energy” elixirs.

As a result, Takumi starts feeling all hot and bothered, and before she knows it, he’s on top of her. But he still manages to hold back, telling her he’s suddenly not himself today and that she should leave before he does something. That’s when Ao asks why he won’t do it.

The answer is instructive: because he values her more than his own desires. Ao turns that around on herself: if her desire is to get into a good university, feeling the way she feels about Takumi would naturally place him above those desires. That’s just how love works; it can literally sweep you away from the best-laid plans to just…getting laid.

Unable to accept such an outcome, no matter how happy it might make her, Ao decides to leave and tells Takumi not to ask her out anymore. The more time she spends with him, the more she’ll value him over studying. Of course, she’s oversimplifying things, and there’s such a thing as work-life balance. If she just lays out her concerns, there’s no reason to think he can’t keep his distance until she’s in a good school, or assist with her studying in some way.

As Chekhov’s Teddy looms in the background, Sakura prepares for a day of delicious lunches and beautiful flower petals that share her name.

Ain’t nothin’ bad gonna happen today! And how can it, with such sweeping, majestic, upbeat music playing as she walks to the park?

If I rated episodes purely by the quality of the soundtrack, this would easily be a 10 out of 10.

Upon meeting up with Tomoyo, the only thing that seems amiss is a slight feeeling that something has a hold of Sakura’s leg, but it’s only momentary, and engenders her smallest of “ho’es?”

The girls arrive earlier than the meet-up time to find their friends already waiting for them, having arrived even earlier.

It’s pastoral perfection and universal punctuality in perfect harmony, and it couldn’t be a prettier day to relax, eat good food, and enjoy the cherry blossoms. 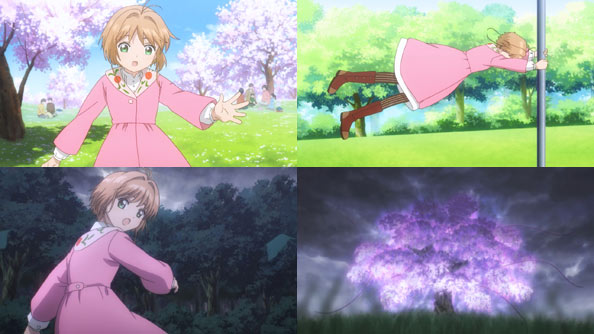 But those little feelings of being pulled become more frequent and more forceful, until Sakura is being pulled away from the picnic and across the park (though she’s able to get her boots back on, somehow).

The weather turns dark and gloomy, and her destination comes into view: a gargantuan sakura tree with glowing purple blossoms that looks particularly sinister, especially with its whipping vines.

Obviously, it’s a card. Boss music plays, Sakura releases her staff, and tries to use a flexible Siege Cube to arrest her momentum, to little effect.

Still, all this card seems to be doing is pulling her towards itself, so it’s really just a matter of pointing her staff at the epicenter and yelling “Secure” from just the right distance without hitting the tree.

The new card she gains is “Gravitation”, which will come in handy if any future cards try to play hard to get. And sadly, Tomoyo once more fails to record Sakura’s heroics; I might be crazy, but this seems like it could be recurring gag.

Sakura is actually full of recurring interactions that differ in the details. We get out latest Lovey-Dovey Sakura x Syaoran Scene in which Syaoran initially says he just ate, then remembers Sakura made a lunch for him and eats that as well (I mean, he would’ve been a jerk not to).

Following some of Yamazaki’s patented Nonsense-Spewing and Sakura-, Syaoran- and now Akiho-Believing, and something, we get something new: everyone pipes down and listens to Tomoyo sing—and she sings beautifully.

There are no weird dreams with the hooded figure who may or may not be Akiho this week, nor any shadowy talks between Syaoran and Eriol; just a nice, idyllic spring picnic with just a brief interruption by a card that was more bark than bite.

Claude forbids Yune to join Alice for a trip to the department store, and she obeys, once again saying one thing while possibly thinking another. Instead Claude, Yune and Oscar go to the park for a picnic. Oscar impresses her with a “spell” that stops the rain and sleight-of-hand tricks, but they remind her of a similar “spell” she put on her older sister that she believes made her blind and weak.

Who would’ve though Yune had a Dark Past She’s Not Proud Of, eh? Well, a dark coincidence at least. Yune’s sister Shione had pale blue eyes, which would have been no big deal in Paris, but in Japan, people gave her looks and even feared her. Lil’ Yune insisted that Shione only look at her, and otherwise keep her eyes closed, sparing her from the looks. Anime eyes tend to be all the colors of the rainbow, but in this realistic period piece, color matters.

It’s an innocent enough sentiment from a concerned lil’ sister, but when Shione grew frail and went blind, Yune blamed herself out of superstition. Shion’s plight is a dreadful shame – but not Yune’s fault. It turns out every time she sees Claude’s eyes, she thinks of Shione. She finally stopped holding everything in, let it all out, and experienced a catharsis. Another cute chapter of a cute series that has just one more cute episode to go.