And now, for the show I’ve been looking forward to most this Summer: the continuation of one of the more low-key charming shows about young unspoken love you’ll ever come across. There’s nothing added to the formula, but the two seem to be at about the same place they were last season, a teeny bit little closer than they used to be.

Of course, you’ll never hear Nishikata admit it. He runs all over the school asking to borrow an English textbook, just so that he doesn’t have to suffer the embarrassment of sliding his desk next to Takagi’s so she can share her book with him. That’s what happens, of course, since theirs is the only class who has English that day.

Like an adolescent Wile E. Coyote, Takagi whips up another half-baked scheme involving vertical messages hidden in notes, and while Takagi the Road Runner refuses to take the bait and turns it right back on him, culminating in a note that is full of genuine affection with no hidden message at all…something that only makes Nishikata blush more. 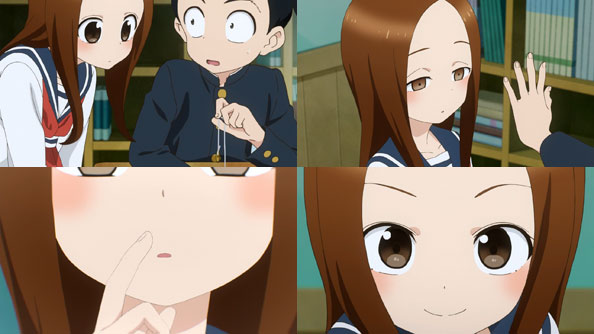 In the next segment (this show does a nice job breaking up its episodes into multiple skits) Takagi offers to be Nishikata’s subject to test a pendulum he made to induce hypnosis, and for a good long time, Takagi makes him believe he was successful, by wearing a glazed-over look and obeying his every command.

When he orders her to pick her nose and she’s about to do it, he blurts out that he changed his mind—believing he was an a real position of power, he proved too kindhearted to let her go through with it. But in the same moment he retreats, Takagi advances, ruthlessly tickling Takagi in his side, the vitality in her eyes fully restored. 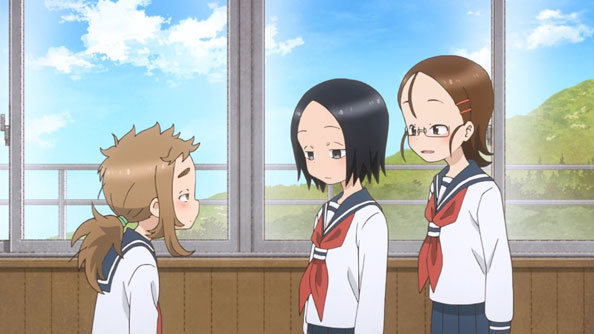 After that, a brief entr’acte involving Mina, Sanae, and Yukari, in which Mina watched the same TV show about hypnotism and ended up hypnotised herself. The three discuss their sleep preferences, and Mina reveals that while she may seem lazy at school, she works her ass off at home, watering the garden and making breakfast and lunch for the whole family before school. No wonder her hair’s askew!

Back to Nishikata and Takagi walking home, when the former suggests they hit up the riverbed. Takagi knows full well he intends to instigate a stone-skipping contest, and offers to forfeit immediately. All he has to do is hold her hand. He refuses emphatically, and the contest proceeds.

Takagi make Nishikata choke by claiming she can skip a stone 30 times, so that her modest three-skip stone beats out his zero skips. But when he’s a bit too excited about finding another perfect stone, they bump bums and she starts falling towards the water. In that moment, Nishikata grabs her hand and pulls her away from the river with such force that he ends up throwing himself in the drink.

If Nishikata ever wanted to truly catch Takagi off guard, this was the time. Alas, he refuses to admit they actually held hands, giving her the automatic win. Still, the fact he saved her at the cost of his own personal dryness is still more proof she won’t be losing interest in him anytime soon.

The mundane setting is bright and cheerful. Takahashi Rie and Kaji Yuki demonstrate their ample seiyu chops with their sensitive and nuanced performances. The characters are lovingly drawn, animated, and lit. Takagi-san is back. We are all better for it.