Grimgar is definitely chugging along at a very deliberate pace, with regular pauses in action and dialogue that are usually employed sparingly if at all in the majority of modern anime. However, so far, that pace working just fine for me, thanks very much!

This is a show that tells you to forget what you know about shows with similar premises and settings. In this show, a very shy girl remains upset about being peeped on for a long time, and when the rain comes, they don’t make any money. 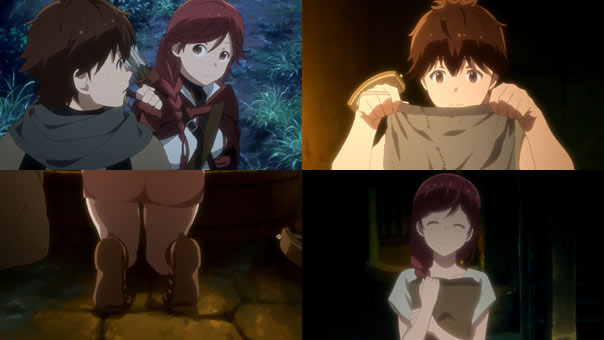 While the chemistry of the cast as a whole together is still a bit uncertain, it’s the wonderful one-on-one interactions that dot this episode and give it life. Interactions like those between Yume, who sees Shihoru is attracted to Manato, is learning as the days go by that Haruhiro is a nice guy, and is consistently nice to him as a result.

Yume is bad with words, but is still able to communicate that it wouldn’t be the end of the world if he saw her naked, as opposed to Ranta, because Haru would apologize properly. Yume wants respect, and Haru offers it without even trying.

The episode also shines in Haru’s narration. This isn’t a party of fighters who are trying to defeat the boss on Level 99; they’re trying to earn enough to afford new underwear.  All that activity, and dampness, is quickly destroying their primative but expensive clothes.

It makes sense that Haru, our narrator and most reliable conduit into this world, is the first to notice that the girls have the same problem as the guys, and are forced to go commando until new skivvies can be procured. He decides not to use this knowledge for evil, steering Ranta away from the girls.

And it’s Yume who helps him make that decision by greeting him warmly rather than suspiciously; Haru doesn’t want there to be further unpleasantness between the genders.

The rainclouds eventually pass, and once the weather is good, the party strikes out to a city abandoned by humans and now inhabited by goblins, many of whom have been separated from their groups for whatever reason, making them vulnerable. It’s good to see the group getting better at performing their own jobs in addition to working better as a unit (with Manato as their general).

It’s also good to see a follow-up to the party’s thoroughly unpleasant but absolutely essential first kill. It may not be sporting to kill a goblin in their sleep, but they can’t afford new undies, they can’t afford the luxury of sportsmanship, and must put their morals aside for the sake of survival. And as we see (and Haru remarks), it gets easier, and they begin gradually raking in loot.

Haru worries they’re starting to turn into volunteer soldiers – cold, hardened, singularly obsessed with their own survival – but Manato points out they’re already soldiers. Plus, their well-earned day of rest doesn’t bear out that worry: luxuries like hot food prepared by someone else, or trinkets like hairclips, are still very much appreciated. It just takes less to make them content now.

It’s on the day of rest that Shihoru hides from Manato behind Yume, even though it’s clear she wanted to talk with him. That leads Yume to have a talk with her back home about starting to talk to the boys again; it’s been long enough, and they’ve been good.

The subtle little romantic subtext in the conversations continues in the boy’s bunks, with a curious mention of Yume’s name by Ranta makes Haru perk up; if the guys and girls pair off, two guys will be left out. Moguzo seems content with cooking and whittling, while Manato and Shihoru seem like a good match.

That leaves Haruhiro, Ranta, and Yume, and while Yume and Ranta aren’t on great terms right now, that doesn’t mean Haruhiro has nothing to worry about. If he doesn’t want to be just a “good friend” to Yume, he’ll have to speak up. At the same time, there’s a possibility Yume likes Manato too, making her and Shihoru rivals. (Of course, this is all conjecture, but all the various interactions and looks and tones by the very good voice cast make it so you can’t help but wonder who likes who and what that will mean to the party as a whole.)

It even looks as if Haruhiro might bring up girls to Manato, but instead simply thanks him for being their leader. For all his eminent competence, Manato doesn’t have a lot of self-esteem, believing his past self wasn’t someone who’d have many friends – perhaps because he’d elicit envy in those not as skilled or handsome as he?

Haru tries to put Manato at ease by saying it doesn’t matter who they used to be. What matters is that they’re all friends here, and after twenty-three days, they’ve managed to not get killed or kill each other … despite the fact that Ranta is a member of their party! That in itself is a minor miracle to be thankful for. Because nothing, not food, not money, not underwear, not tomorrow, can be taken for granted in Grimgar.