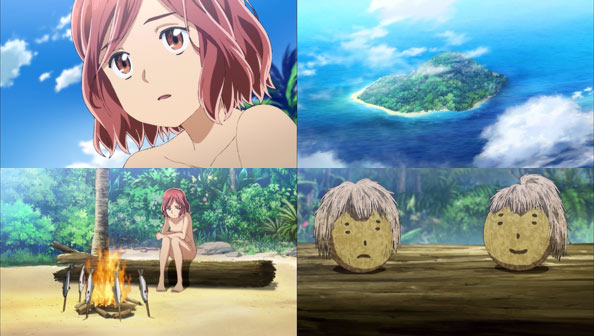 If Hina had simply been sent home via orb, none of the hilarity this week would have transpired. Chalk that up to an “organization” that is way more incompetent than you’d expect of an entity that deals with girls with terrifying telekinetic abilities. You’d think there’d have been some kind of revolt at this point.

Consider Mao: the “shy but capable” courier meant to deliver a new orb to Kei for Hina to use to return home (so that’s not off the table like it is for the officially-dead Anzu). Only Mao is transported to a remote tropical island just north of Indonesia, and both her orb and the spare for Hina are washed away within moments of arriving.

From there, the first act is a one-woman homage to Cast Away starring Ozawa Ari as Mao. She certainly is capable, able to survive just fine for days thanks to her ability (though why’d it take twelve days to make clothes?) Like Tom Hanks, she makes a friend—two friends, Anzu and Hina—out of coconuts. Unlike Tom Hanks, she voices both of them.

Weeks pass, and like Hanks, her hair gets longer and she develops a more stoicly intense look, while her “friends” have grown bodies. But eventually she snaps, tosses the coconuts—which are not her real friends, but just, well coconuts—off a cliff, and does what she should have done weeks ago: builds a raft and sails for the mainland (though ends up in Thailand, not Japan).

With Hina’s departure again indefinitely on hold, we move on to Nitta. He and Sabu have been ordered to pick up Nitta’s former brother Naito “The Slayer” from prison. With the president in a coma prior to naming a successor, an idiotic little power struggle plays out, thanks in equal part to Hina and Sabu.

Nitta manages to convince Naito not to challenge the lieutenant, but when Gramps wakes up and names Nitta his successor (to placate Hina, to whom he’s taken a shine), Sabu has too quick a text trigger. Both the lieutenant and Naito believe Nitta played them to steal the throne. Nitta sets the old man straight and the lieutenant is reinstalled two minutes later, but Sabu never texts this to the still-enraged lieutenant.

Before he knows it, Nitta is encased in an oil drum full of hardened concrete, with the LT and Naito ready to make him swim with the fishes. But Sabu’s chronic nausea is the first sign something is amiss. Nita’s failure to “nut up and go out like a villain” is another.

The president arrives just in time to corroborate Nitta’s defense. Once the LT and Naito realize they jumped the gun (with Sabu continuing to vomit but not own up to causing this) it’s needless to say an awkward situation. The LT decides to promote Nita to replace him on the spot, and everyone cheers him…but he just wants to be let out of the damn concrete. Where’s Hina when you need her?

Well, she and Nitta are apparently fine now after she walked in on his “one-man party.” We know this because there’s a helpful side note at the bottom of the screen. And that’s fine with me; that shortcut enables us to move on to something funnier: Hina planning a celebration for Nitta’s promotion.

She reaches out to virtually all of her amassed acquaintances, who all have different suggestions. I particularly liked Mika’s suggestion of booze…while drinking booze, stating she’s always celebrating the fact she was born, which is a slick way to excuse her alcoholism! A woman after my heart…

Hina can’t decide which persons advice to use, so she combines them. However, she isn’t able to procure booze, and spends so much on flowers she cans afford a cake, so makes one out of salt

When a serious-looking woman with black boots and gloves arrives in town (fully-clothed-Terminator-style) asking Anzu for Hina’s whereabouts, it felt like the beginning of the end for Hina’s stay with Nitta…for about five minutes.

Then we learn that while Ikaruga Kei looks the part of a badass punative field officer, Anzu has to keep her from constantly taking shortcuts in her duties, and she’s terrified of clashing with Hina, who apparently destroyed a city when she lost control one day.

Ikaruga’s duties aren’t even that involved or complicated; as Anzu says, anyone could follow Hina and check off boxes that determine whether she’s still out of control (she isn’t). As for Anzu herself? When she never returned due to her travel orb getting ruined in the wash, she was declared KIA and is now free to live her best life. 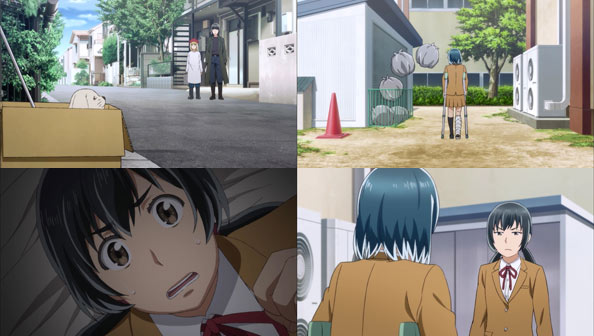 Ikaruga ultimately gives up when both the novice and advanced-level questionnaires reveal Hina has changed and grown, but later reads an addendum that stipulates if she gets over a 90% score, it means she can, and should, return “home”, wherever that is; thankfully the show never says. Ikaruga also has a dog, thanks to a failed gambit to get Hina to fail a question about caring for animals.

Meanwhile, Hina continues going to school where she mostly eats and sleeps. However, despite having a broken leg she still has cleaning duty, and a classmate witnesses her using telekinesis to toss out the garbage. Not just any classmate, but Shinjou Mami, who is obsessed with magic and the occult.

Mami believes she’s made a monumental discovery, but has heard what the ominous “Organization” did to the last person to speak out about it, and so intends to tread carefully. At the end of the day, however, she just comes right out and directly confronts Hina, who does not deny her powers.

Mami quickly befriends Hina and decides to become the disciple to the master, even though Hina’s powers are non-transferrable. Watching Mami try all day to lift a rock on her own, Hina lifts it for her out of a desire to leave the riverbank since it’s getting late.

That only makes things worse for Mami, who believes she lifted the rock (and later rocks), and despite not being able to lift anything when Hina’s not around, she quickly gets full enough of herself to make a big show of her powers in class, which ends in abject failure and humiliation. 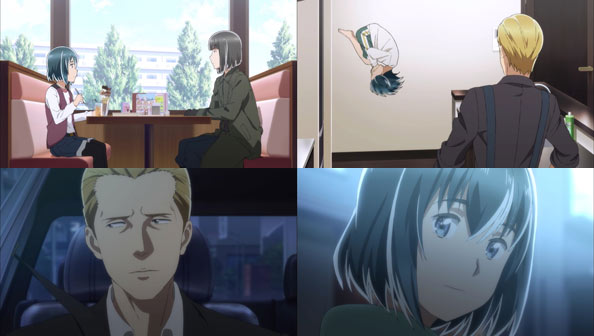 Eventually Ikaruga confronts Hina, who is celebrating her leg being healed with a big chocolate parfait, and tells her she has to go home. Hina doesn’t want to, but she’s grown to the point where she knows the value of orders, and will obey them in this case, to Ikaruga’s shock.

That means she has to drop the news to Nitta that she’s leaving, and the novelty tees she wears that say “BYEBYE” and “SAYONARA” don’t do the trick. She levitates and flies around in place until she’s nauseous trying to think of the best way.

After a brace of medical tests comes up, Nitta finally demands she tell him what’s up. He responds by taking her out for one last ikura bowl before driving her to the spot where she’ll meet with Ikaruga. Nitta is honest in his parting words, telling Hina she’s been a royal pain in the ass, but he nevertheless really enjoyed the time they had together.

That puts a rare joyful smile on Hina’s face…but she’s obviously not going anywhere. After all, the “Orb” in which she arrived at Nitta’s apartment—and in which he got stuck and had to stew in his own urine all night—was discarded (with other non-burnable trash) and is now lost and possibly destroyed. No orb, no return home.

Hina’s, and the episode’s, return to the status quo is marked when she reappears at Nitta’s to learn that he is holding a New Year “Without Hina” Party…all by himself. She interrupts the start of his explanation with a grave “NOT COOL.”

Between the sometimes lazy security chief Ikaruga and the would-be disciple Mami, we got two solid new players in this world of complex characters who each command their share of laughs with both their actions and their inner thoughts.

I also enjoyed little moments like when Anzu and Ikaruga muse on what should be done with the dog, or Mami’s mom standing in the hall. While it might well have been interesting for Hina to actually go home, by not doing so the show preserves the mystery of that place and the organization that administrates it.

I don’t mind learning how “powered” girls need the Orbs to travel…but I don’t really need to get too deep into the workings of the other world. I dig the mystique. Plus, there’s plenty to do right here on Earth.