After last week’s dullness I’ll admit I was prepared to drop Sherlock after this fifth episode, but I’m pleased to say the quality improved greatly, thanks in part to a refocusing of the narrative upon the Morstan sisters. Rather than be separated, Lucy took Mary and ran away, making Kabukichou their home. It was and is a tough life, and there’s never enough money, but in exchange they got to remain a family.

We learn that Lucy has a soft spot for a particular aging sumo wrestler named Omiyama, and delivers some daifuku for him as a token of her esteem. Later, Mary asks Lucy for help paying tuition for a cram school to the tune of 2 million yen (~$37,000), so she gets a loan for the amount from yakuza Boss Kaneko, who warns that if she doesn’t pay it back in two weeks, she’ll have to work at one of his red light district businesses.

On her way home to give her beloved little sister the cash, Lucy and Moriarty encounter a large man in pink robes seemingly ready to jump off a balcony. Turns out he’s her favorite sumo wrestler’s attendant, Bunmaru, who got drunk, passed out, and lost the money meant to repair their team’s headquarters. The amount? Two million yen. She has to go back to Boss Kaneko and doubles her debt.

When Omiyama and Bunmaru come to the Pipecat to offer their heartfelt thanks, Sherlock, sitting at the bar, notices something. Later, Kaneko has a chat with Watson about Lucy, and he drags her to Sherlock, begging him to lend her money to pay the boss back. But Sherlock says there’s no need: the one who took Bunmaru’s two million hasn’t spent it yet. He explains in rakugo form, but Lucy only has to hear the part about the daifuku putting you to sleep before running off to confront Omiyama.

Lucy’s regard for Omiyama goes back to the day she and Mary arrive in Kabukichou, when some bad men were about to abduct Mary, and Lucy was too small to fight them off. Mary is rescued by Omiyama, who leaves Lucy with a bit of advice: stay on the straight and narrow and you’ll do fine here.

Fast forward to the present, and Omiyama is facing demotion and retirement…so he drugged the daifuku Bunmaru ate so he could steal the two million repair fund and use it to fix matches.

Lucy tries to fight Omiyama to no avail, then exposes his crime, and he is contrite. Clearly moved by Lucy’s ability to stay on the straight and narrow all this time like he advised years ago, he accepts retirement and returns the cash to his attendant. 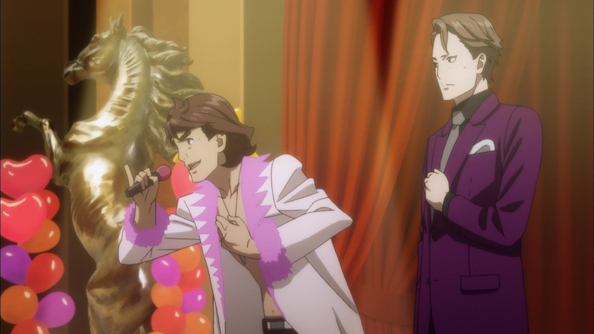 Lucy doesn’t take that cash back, even though it’s owed. Instead, she goes to work for Boss Kaneko. When Mary hears about this she’s distraught and busts her way into the business, but it turns out to be nothing too untoward: Lucy just had to dress up in drag and be a lot for the “Stud Farm” auction, where she’s naturally a sensation.

In the end, the “tuition” Mary wanted wasn’t for classes at all, but a beautiful dress she wanted and which she ends up wearing to the auction. In that regard, this episode doesn’t make Mary look that great (especially if Lucy ended up having to do something worse to pay back the boss), but demonstrates Lucy’s incurable weak spot for her little sister, and her fierce commitment to her happiness.