Special abilities and incredible strength aren’t what’s scary, says Clair. What’s truly scary is the people who use them. Madoka is one of those people, and after disarming Shuuihi and Clair with ease, he gives the Weak a simple ultimatum: either serve up one of their own for him to kill to make up for the man he lost, or he’ll kill every one of them.

As someone who, like Madoka, has the will to use the power she wields when within Shuuichi, Clair breaks it to the others that there may be no way out of this except by playing dirty to some degree, or otherwise choosing one of them to sacrifice. Clair is exempt from the choice, since Madoka recognized her as a kindred spirit.

It’s good to learn more about Madoka, and how he was a pitiable loner and self-professed “shithead” who couldn’t make anything work in his past life. Ironically, it was his tendency to always look down that led him to finding the coin that changed his life. All Madoka ever wanted was a group of friends, and now that he has that, he couldn’t be happier, and wants to keep it going. He says as much to the Weak, being far more reasonable than someone so powerful needs to be.

Clair hears those words and knows that if they’re going to survive the day without any of them dying, they’ll have to hit Madoka where it truly hurts: his friends. She has Isao grow huge bushes of poisonous oleander. Then Shuuichi shows up, and wants to help.

Clair tells him to stay out; it’s her job to get her hands dirty while he remains the “good boy”. But Shuuichi doesn’t agree. They’re one, which means she won’t have to bear her crimes and their consequences alone anymore. You can tell Clair really needed the hug he gives her, and to hear those words from him. This is a beautiful moment on a show full of ugly ones.

Once the oleander is set alight, the Weak escape upwind of the poisonous smoke, which envelops Madoka and his gang when they try to persue. Madoka can escape the fire on his own and kill the Weak, but to do so would mean abandoning all of the friends to die in a cloud of poisonous smoke and flame. So he remains to help them. Clair trusted her intuition that Madoka wouldn’t abandon his friends, and won. 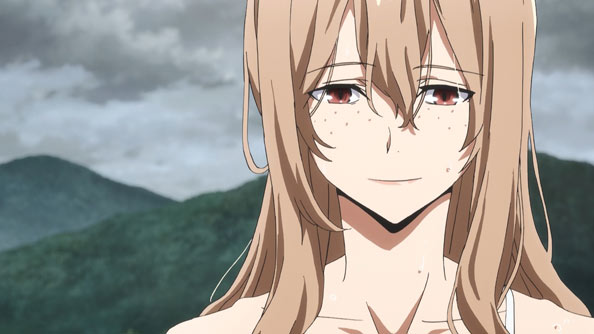 Being able to gamble when the stakes are so high is also what makes Clair and people like her “scary” in her eyes. But after hearing Madoka’s thoughts on the matter, as well as Shuuichi’s words of support, Clair realizes that even the purest of heart can become utterly ruthless when taking action for the sake of another, as Shuuichi vowed to do for her.

In fact, it explains why someone like Elena, whom neither she nor Sayaka could ever imagine becoming an evil monster, became one anyway. Not only someone with terrifying powers, but the will to use them…but like Clair, she couldn’t hope to bear the weight of her crimes alone.