Dororo has never not known war, and it has taken everything from him but his life. But even that is threatened when he suddenly collapses with an apparent fever. Hyakkimaru has to carry him to find help, and eventually comes upon a kind priestess who takes them into the temple for Dororo to recover.

After a couple of lighthearted episodes—one in which the ghoul-of-the-week turns out to be not so bad, and one in which a boy and his big sis survive—the “party is over” this week, as we’re told the heart-wrenching tale of how Dororo became an orphan, and why he clings so close to Hyakkimaru and fears being left behind.

On two occasions, Dororo spots red spider lilies, which he hates, because they remind him of when his mama died in a field of them. 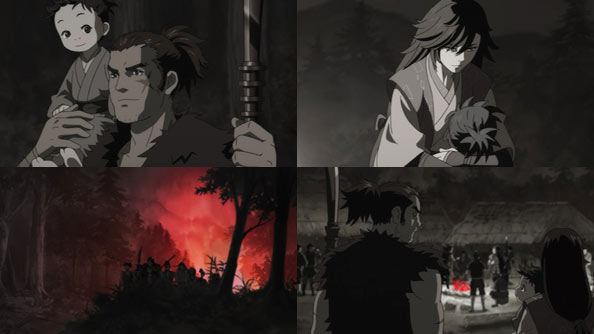 Dororo’s father Hibukuro was a big, strong leader of a band of brigands who unusually only targeted samurai, seeking retribution on those who destroyed their village. His mother Ojiya was his strong, kind wife. But it doesn’t take long to see that an age as cruel as the one in which they live wouldn’t allow such an arrangement to last for long.

Hibukuro is good at killing and good at bringing men to his side, but when his band gets strong enough, his right-hand man Itachi suggests they make a deal with a lord. It’s the smart, pragmatic move; one that has the best chance of ensuring the survival of his family. But neither of Dororo’s parents are willing to turn to the lords ever again…and young Dororo follows their lead.

Predictably, Itachi betrays them by making a deal with the samurai, who end up filling Hibukuro’s legs with arrows. Itachi takes the band for himself, leaving the wounded Hibukuro and his family to scavenge fields of the dead for scraps of food. Itachi and his treahery represented a natural element to this world, and Hibukuro and Ojiya simply lacked the pragmatism that would have enabled them to survive.

If he hadn’t betrayed them, Hibukuro’s stubbornness would have doomed him again anyway…and it does, when they happen upon another village the samurai are preparing to burn. One of them recognizes Hibukuro’s signature pole sword and seeks revenge for his fallen friends.

Hibukuro has an epic death by bear-hugging and impaling the man who impaled him, but the end result is that Ojiya and Dororo are now all on their own. You can see the moment Ojiya knows they’re somehow even more screwed than they were a minute ago, and their margin of survival henceforth is that much smaller.

It’s something of a miracle the samurai let Ojiya and Dororo go free, and we know from Dororo telling Mio that Ojiya never sold her body for money or food. But when she hears that samurai are handing out free soup, she gets in line, something she and her husband might not have done before things got so dire.

She’s even willing to cut in line, hold out her hands, and have the scalding soup poured in her hands (she has no bowl) so that Dororo can eat. And Itachi is there, in his fancy clothes, comfy with the lord, basically telling her “I told you so.” Dororo throws a rock at him—perhaps for the first time—but Itachi catches it easily.

When we see the mother and child walking slowly through a field of those damned red spider lilies (the show’s profound artistry on full display this week as usual), I knew that was going to be the end of Ojiya’s tether. She collapses from starvation, can’t get back up, and the life drains from her eyes as Dororo begs her not to, promising he won’t tell her he’s hungry anymore. It’s a brutal gut punch.

Time and time again, right until the moment of her death, Dororo’s mother told him not to let the war beat him, even though it claimed her and his father. When he recovers from his fever, we learn he had told the priestess this entire story. Thanks to her ministrations, he can keep going, keep fighting against the war that’s taken almost everything.

But as he continues his journey with Hyakkimaru, Dororo realizes when he smells his freshly-cleaned clothes that those clothes had to have been removed at some point. And the priestess told Hyakkimaru how difficult it must be to travel with “such a young girl.” That’s when I learned for the first time (I never watched the original show): Dororo is a girl.

The hints were there: her button-cute appearance, girlish eyelashes, and the fact she was voiced by a girl and not a boy. And surely it’s smart to dress as a guy and not a girl when you’re all alone in a cruel, merciless world like this. Now Hyakkimaru knows the truth, and I’m eager to see how that’ll change their dynamic as he continues to develop his voice. 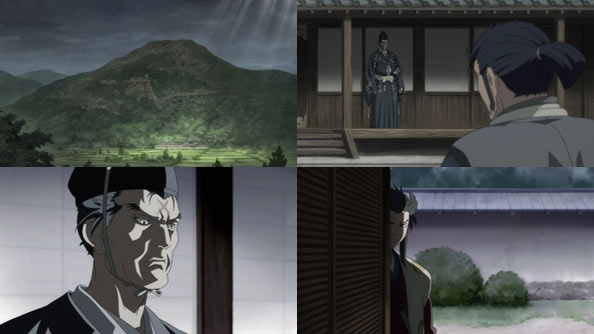 Unfortunately, the days they still have to travel the lands together in search of ghouls and fortune may soon be interrupted by more huge developments: one of Daigo’s spies has informed him of a midwife who put a limbless infant in the river, and young warrior with prosthetic arms. Tahoumaru overhears as well. Soon, Hyakkimaru, the instrument of Daigo’s mounting misfortunes (due to the demons losing his parts one by one) will be the crosshairs of his father and younger brother.

And while Dororo is a capable fighter and thief, she’s far from invincible, as we’ve learned from the times Hyakkimaru has had to rescue her, including the first time he did. Like Hibukuro, the day may come when he’ll have to choose whether to fight those who have forsaken him, or focus on protecting Dororo. More limbs and senses, more problems…