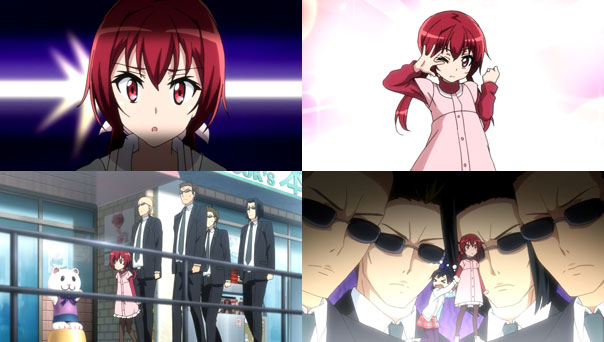 With only a month to go before the election, the Sakurada siblings watch the latest polls, and the question of why Akane is so scared of crowds and attention comes up. Her older siblings recall that she wasn’t always so shy in public; quite the opposite, and thus we enter a flashback with that bold, courageous Lil’ Akane, obsessed with spreading justice throughout the land (perhaps influenced by comic books). 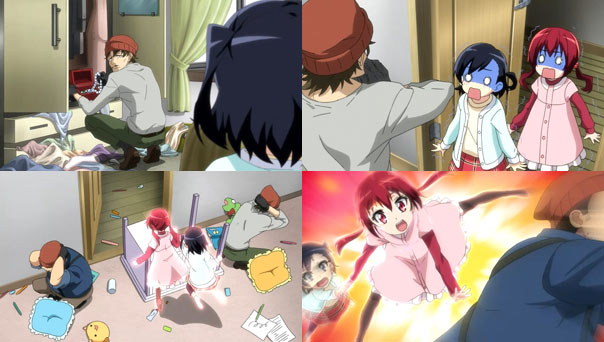 Her confidence in and ease with which she wields her powers leads to her ditching her guards in order to hang out at her best bud Karen’s house, only to encounter two burglars tossing the place. The two girls are paralyzed at first, but Akane gathers her courage and uses her powers to foil the bad guys in a Home Alone-style action scene. 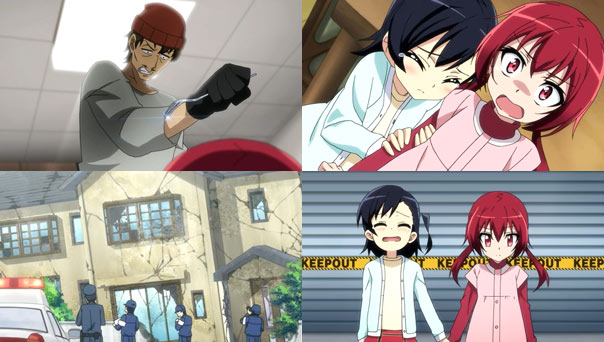 Then the bad guys take the kid gloves off and threaten to hurt the girls, at which point Akane has no choice but to go a little overboard, scaring the burglars into submission, but destorying Karen’s house in the process. The gathering crowds around the site, with all the opinions and judgements flying as Akane stands holding a thankful Karen’s hand tight, gradually overwhelm her. It’s an ordeal that informs how she reacts to being in the spotlight to this day. But as Kanade said early in the episode, she had some stuff in the past that she managed to deal with; so can Akane. 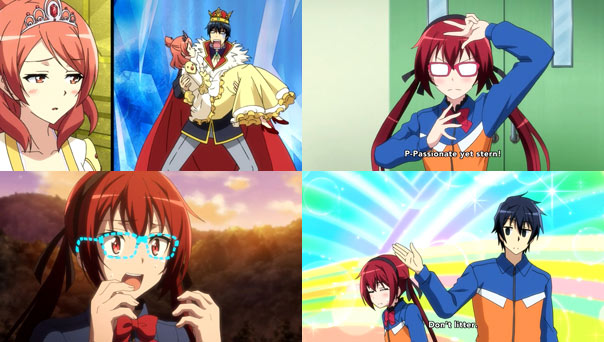 Her story is carried into the second segment as she gets the opportunity to overcome her shyness once and for all (or, at least, partially). That’s because their dad the king is in bed with a strained back (much to their mom’s chagrin), and the Sakurada princes and princesses must work together to accomplish all the official duties he’s unable to.

Akane initially helps out saving various people at a town that was hit by a landslide with her powers under the bespectacled guise of Scarlet Bloom, but she gets so into her good deeds, she doesn’t realize she loses her “Jamming Glasses” (which we know don’t really do anything) and is recognizable to all as Princess Akane.

She then remembers Karen remarking on that day she saved her from the burglars. Sure, there was some collateral damage, but that didn’t mean anything to Karen or presumably her folks, because Karen was alive and okay thanks to Akane’s heroism. So she can hold her head high—as herself, not Scarlet Bloom—as the election approaches. Because far more people like her than don’t.