Ai tells Hayato in no uncertain terms she’ll never let herself be caught alone with Takeo, and even if she does, she’s not just going to tell him how she feels. When Hayato introduced this plan last week, it seemed like a solid one with the possibility for some great emotional work…and it was, it just didn’t go quite as smoothly as Hayato intended.

But in the meantime, Takeo and Rinko practically lose it at MM Land, both laughing so much their faces hurt. The shot of a clown-like Takeo rendered as if he were part of the carousel triggered similar laughter in me, along with Takeo’s hilarious reactions to the haunted river ride.

Hayato is a bright guy, so his chess moves end up outmaneuvering Ai, who ends up spending a lot more time alone with Takeo than she bargained for, and it’s at turns awkward and enjoyable, to the point she start to enter into the frame of mind of “well, we’re here…why don’t I tell him?” It doesn’t help matters that Takeo is pretty much his usual awesome self around her, enjoying himself with Ai and helping a lost kid get found.

When he says he doesn’t remember calling Ai a certain flower years ago, Ai is almost off the hook…until Takeo spots the very same flower and tells her if she was a flower, it would be that. This is the reinforcement of a powerful feeling Ai’s had buried in her heart ever since he said those words the first time, but that Takeo’s view of her hasn’t changed a bit even though he’s grown so much speaks volumes to her. 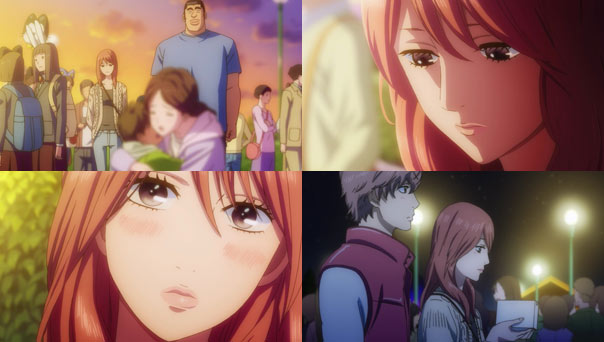 Even so, she finally tries to confess, but you could say she undone by fate, in the form of the announcement that the Sparkly Parade Takeo and Yamato promised to meet up for is starting. This could have come off as a cheap conceit—doomed by the bell, rather than saved—but to Ai, it’s a fresh chance to forget about telling Takeo, which might well fundamentally change him, and simply be content with what she has.

And she is. A delicious coffee cake that represents her (bitter yet sweet) baked by Yamato, and being called a lily twice by Takeo at two different points in his life; this is enough to make her happy. She doesn’t need to look on the other side of the curtain. And because of that, perhaps Hayato’s chances aren’t as dire as he thought.

As for Yamato, Ai prods her in the right direction once more, telling her not to worry about silly jinxes and trust in Takeo, as he trusts in her. She does so, and because they’re simply meant to be together, the crowds seem to part at just the right time for them to find each other, with Yamato jumping into Takeo’s arms with elation.

They get to watch the parade together as they hoped, and even get within kissing angle and distance before Suna accidentally interrupts with his apologies. But considering how happy these two make each other simply being in general proximity to each other, that first kiss can wait a while longer.

At the start of this episode, Takeo and Yamato prove not only that they’re an exceedingly awesome and adorable couple, but also a great team when it comes to doing nice things for people they care about. They’re also pretty proud themselves about how nicely their plan to surprise Suna goes, and are totally in sync, matching their gestures and expressions perfectly. 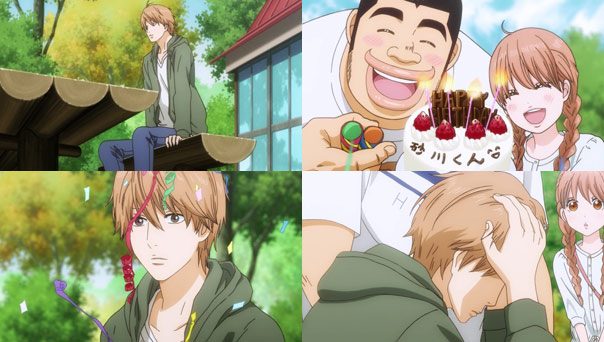 Of course, Suna’s no fool, so he suspects something’s going on, but assumes that it’s just another case of his nice friends doing nice—and to his mind, unnecessary—things for him. But when the cake comes out and they remind him it’s his birthday, he suddenly gets it. Taken aback, he’s not sure how to react, until Takeo tells him simply to be happy, which Suna can get behind.

From there, both Yamato and Suna get to witness Takeo at his job at the bro cafe (a job the owner wouldn’t let him walk away from, popular as he is). And here, we get the first sign of trouble this show has presented in some time, in the form of another guy looking for Takeo (but mistaking Suna for him).

Turns out this fellow, Oda Hayato, is a classmate of Ai’s at college, and wanted to meet the man she still clearly has feelings for, because he has feelings for Ai, and her unrequited love for Takeo is getting in the way. Still, she has no patience for him, and offers to take him to the station to be rid of him.

When Takeo, flush with cash from his job, asks Yamato out to “MM Land” (Not Disneyland, lawyers!), Yamato gives a three-layer response of initial excitement, followed by the apparent memory of something, followed by a deflation of interest and a rejection.

It’s a complex response, one Takeo doesn’t have a hope of parsing. Thankfully, Ai is home for the long weekend right next door. Takeo meant to consult with Suna, but Ai proves even more helpful, as she says she’ll get to the bottom of it when the four go out for coffee tomorrow.

(I especially enjoyed Takeo’s inner embarrassment at storming into his best mate’s room, forgetting Ai was there, then reminiscing about how he’s done it often throughout the years, but she never seemed to mind at all.)

The next day, Ai comes right out and asks Yamato about MM Land, and without wondering how Ai got the information, Yamato stands her ground. It takes the sudden surprise return of Hayato to wrench out the detail’s of Yamato’s hesitance to go: she’s worried about an apparent jinx that couples who go there will break up. (Hon, it’s not IKEA!)

So Hayato proposes all five of them go to MM Land tomorrow; since it isn’t a date, the jinx won’t apply. Yamato really wants to go, and go with Takeo, and vice versa, so they’re fine with it, while Suna goes along with whatever. The only one not 100% okay with this little plan is Ai. 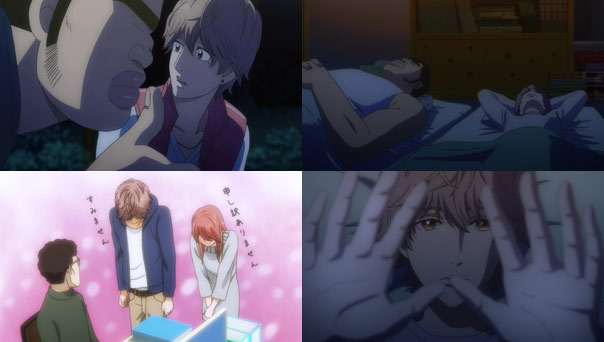 Later that night we find that Hayato is so serious about wanting Ai to come around to him, he came to her hometown without any plans about where to stay. Because Takeo is a great guy, and his family is totally chill and also great, he can stay at Takeo’s without any problem; an offer he takes with gratitude.

As they go to bed (way too early for his taste, but he’s a guest), Hayato talks with Takeo more about, who else, Ai, and what he says offers insight that’s in conflict with her standoffishness we see from her. She seemed genuinely concerned for him when he got in trouble, and helped him with a problem, likely saving his skin.

Like Suna, Hayato doesn’t have any trouble attracting ladies; it’s a matter of attracting the lady he likes. Right now, there’s an old flame in his way, keeping her from falling into his arms, and he wants to clear it. I don’t blame him.

The next morning, Ai is shocked and pretty pissed off that Hayato took advantage of Takeo’s hospitality and ended up spending the night right next door to her, but in the hallway, after she threatens him with another fork (just like at the cafe!), Hayato informs her of the plan within the plan: at some point at MM Land, he’s going to separate Yamato and Takeo, giving Ai the opening she needs to tell Takeo her feelings.

Sure, it seems like this guy is barging in on Ai’s life and forcing her to do something she hasn’t done to this point, but when I consider that she’s the one who brought Takeo up in the first place (under hypnosis, mind you!) and the way he remains on her mind, tells me she may not necessarily decry an outside effort to break her out of her unrequited love cycle. The problem is she’s never told Takeo how she feels, and she should, so she can get real closure—because the closure she’s settled for isn’t cutting it.

Of course, the way Hayato puts it—”separating” the inseparable couple—carries its own foreboding, especially when next week’s episode is called “My Jinx.” Will MM Land not care that Yamato and Takeo are with others and events conspire to threaten their bubbly relationship after all? How will Takeo take Ai’s confession (assuming she confesses)? Lots to ponder going into Ore’s second half.