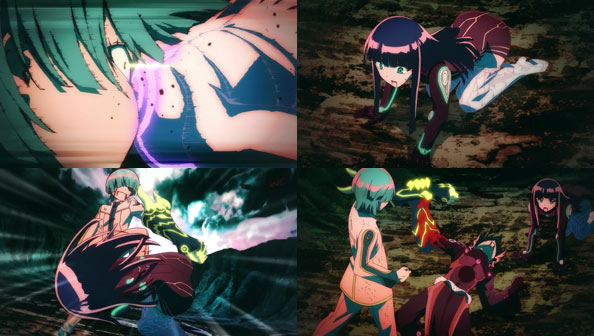 If it’s wrong to be immersed in this particular slice of formulaic shounen entertainment, I don’t want to be right. This episode put wasn’t perfect, but it got use through the epic battle between Yuto and the twins with a decent variety of twists, then capitalized on all of the good work it’s done with Roku and Benio to bring the arc to a close.

I’ve been clear about my dislike of the one-dimensional Yuto, but he’s made much more interesting by Benio’s assertion he’s hiding how much damage they actually did to him—without lessoning the threat he still poses as long as he remains on his two feet.

I was hoping Benio could have ended things with Yuto with her new awesome Kegare legs, but she blasts through all her power too quickly, and Roku has to step in and save her. When Roku just can’t watch Yuto beat Benio anymore, the episode turns his power knob up to 11.

He can fight on the same level as Yuto, and he’s healed when Yuto blasts a hole in him. Furthermore, since they’re in Magano, all of the spirits of Roku’s friends whom Yuto turned into Kegare literally have his back, and he gains the final boost he needs to blow Yuto away.

Blow him away he does, with a big ‘ol authoritative energy beam…but Yuto isn’t dead. C’mon now, there are 30 episodes left! Also, he merely “fell into darkness.” He’ll be back, but he’s gone for now, and Roku and Benio really can go home and have that ohagi. So I’m happy.

Could I have been happier? Sure. Why didn’t Yuto ever think to break Roku’s legs, or broken his instead of Benio’s? If he had, Benio would have had to save Roku, not the other way around. But I’ll let it go; both of them saved each other; who got the last lick in is not of much consequence.

What mattered was that SnO get the aftermath right after the battle ended. And what had been a nominal 8 up to the end of the battle rose to a 9, thanks to doing just that.

Roku wakes to a smiling Benio. They meet with Arima and the 12 Guardians, the latter of which threaten discipline. But Benio helps reinforce the facts: the guardians wouldn’t have gotten there in time, their friends and family were threatened, and Seigen failed. So no punishment.

However, Arima’s nice-guy mask cracks more than once in this meeting, as he reiterates Roku’s true mission, which isn’t to train or become stronger or even fight or exorcise anyone or anything; it’s to marry Benio and conceive the Miko.

Roku turns the issue around by first going up to Benio and proposing to her, but then asking what exactly a newborn baby is going to be able to do about calamities that will arrive before he’s a glimmer in Roku’s eye? He isn’t going to wait and put such a burden on an infant. He’s going to keep getting stronger and make sure the Miko has as little left to do in the world-saving department as possible.

Benio are of the same mind on this, so Arima indulges them: they have two years to become stronger than the 12 Guardians. The consequences if they can’t? Marriage and babymakin’. 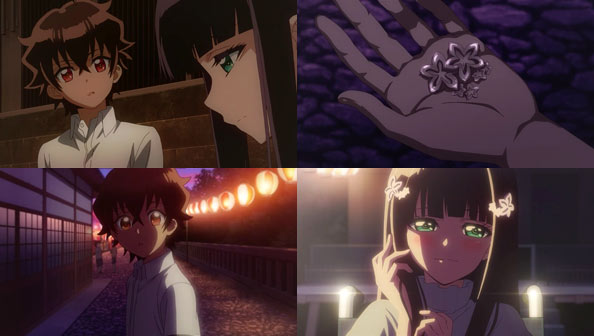 Make no mistake: neither Roku nor Benio are ready for those things yet. But right here and now, they are a couple, and both have gotten more and more comfortable with that after everything they’ve been through and how they’ve come through for one another.

After all of that, and then enjoying a festival together, and after Roku buys Benio a new pair of sakura-themed hairpins, Plan B looks less like something they’ve always want to avoid, and more like something they’ll want anyway, when they’re ready.

Oh, and Mayura is going to be an exorcist, so she can stand and fight beside her friends. Good to hear; someone with such inventive expressions shouldn’t be kept on the sidelines.