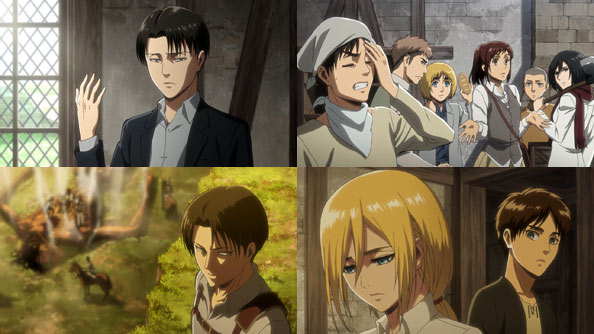 Season 3 of Shingeki no Kyoujin begins with a question long pondered by Eren: If beyond the wall is a sea…what’s beyond the sea? Wizard of Oz will always be a favorite movie of mine, but I doubt I was alone when I first saw the curtain get pulled back to reveal the “Great and Powerful” Oz was just a flimflam man with a budget.

Titan has never pulled the curtain back; not entirely. It may show us glimpses that alter or expand our way of thinking about this bizarre and mysterious world, but the central mystery of how all of what is going on came to be remains tightly guarded.

I found it notable that this season’s OP contains not one bit of anyone actually fighting a Titan. Indeed, the entire episode only features one Titan: Eren, briefly, in a controlled experiment. That’s because the true enemy of mankind is, not surprisingly, mankind. 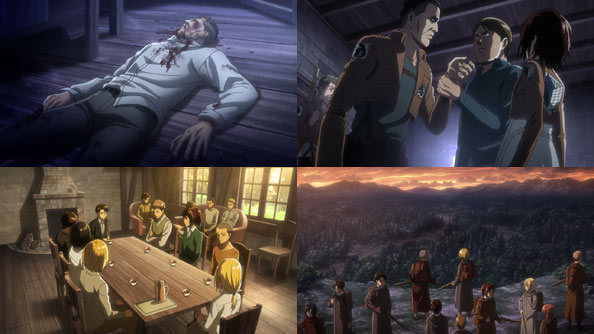 Titan Season 3 looks like it will further explore the depths of the secrets of the walls, detail the lengths to which the Powers that Be will go to protect them, and impress upon us the importance of revealing or exposing those secrets for the salvation of humanity…if that’s even what the “good guys” are actually doing.

That’s what’s intriguing; even someone as sharp and resourceful as Levi only has bits and pieces to work off of regarding their “enemy.” All he knows is that he was entrusted with the Titan Coordinate (Eren) and the heiress to the throne (Historia), two assets that, properly utilized, could blow this whole thing wide open.

But those Powers are working against him, and brazenly; no longer in the shadows. The secret behind the curtain remains, but forces have come from behind it to shoo nosy interlopers away. With Scout Regiment activity suspended, Pastor Nick murdered, Commander Erwin arrested, and Levi’s squad on the run, the episode adopts the feel of a cat-and-mouse conspiracy thriller.

And yet, for all of the brisk plot development, the ep still takes the time to re-introduce the cast still stinging from their respective recent ordeals. There’s painfully forthright Eren; eternally badass Misaka; strategic Armin; hungry Sasha; resentful Jean; weary Connie; non-good-girl-y Historia; crazy Hange; no-BS Levi. I left plenty out but you get the gist. 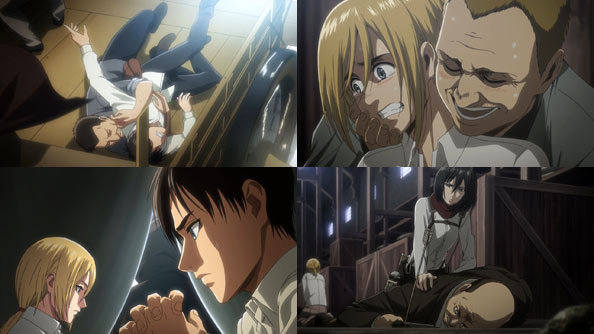 When the government demands the Scouts hand over Eren and Historia, Levi takes a gamble by sending his squad to Trost district, the site of the Pastor’s torture and murder, and bring Eren and Historia before Pyxis. They enter the district in broad daylight wearing their gear, and Eren and Historia are quicky snatched up by kidnappers.

Only the “Eren” and “Historia” they snatch are actually Armin and Jean posing as body doubles. Led by Mikasa, Levi’s scouts rescue them and capture the kidnappers, who prove so laughably amateurish that it sets off alarm bells in Levi’s head. Could they—could HE have fallen for a larger chess game in which the kidnapping was only a diversion?

The feeling of dread only grows worse as Levi observes from a rooftop as the wagon containing the real Eren and Historia getting blocked by a large crowd. The suspicion of being in the middle of a trap crystallizing, Levi asks Hange’s scouts Nifa if she’s ever heard of the serial-killer Kenny the Ripper, then reveals he used to know and live with him.

Levi identifies the true kidnappers too late, as Kenny gets the jump on him, takes Nifa’s head off with his huge guns, and gives Levi a warm greeting as his very large and professional-looking crew swoops in to surround him.

What had started oh-so-modestly with the scouts cleaning up their farmhouse hideout escalated in a damned hurry. Eren and Historia are in deep trouble if Levi could be ambushed so easily. I didn’t imagine the show could make the government as existentially scary as a Titan attack, but…here we are.