Staz meets Heads Hydra, Bell’s dad and Neyn’s wife. Neyn wants to adopt Fuyumi, but Heads wants to give Fuyumi the choice of whether to stay with them or be brought back to life. He makes Staz pledge to do what Fuyumi says and not drink her blood without permission. Staz agrees, and he and Fuyumi are transported to Hydra’s exit. Meanwhile, Deku and Mimic protect Staz’s territory from interlopers, while Liz helps Braz escape from Goyle. Braz and Stein complete their work resurrecting Braz’s dad.

All of Staz’s and Fuyumi’s adventures have risen out of the original plan to bring her back to life. At first, Staz wanted to do this so he could drink her delicious human blood (Ever tried drinking ghost blood? Nothin’!), a selfish reason that didn’t have anything to do with Fuyumi’s well-being. But now that both he and Fuyumi are given a choice: give Fuyumi up to Neyn, or continue with the resurrection plans – his motives have changed from selfish to selfless. In the end, this is partly because Heads intimates that he might die of a curse if he harms or defies her (though that “curse” was merely a trick played with herbs.)

Heads was never a guy Staz had to fight, just a guy he had to convince he had Fuyumi’s interests at heart. Fuyumi decides she wants to be brought back to life, so they leave the comfort and safety of Hydra and will have to deal with Braz – who clearly has other priorities, along with some mysterious team of red-eyed baddies. But that will have to wait until next season or the OVA(s) or film or whatever. It was a very tentative ending. So…will we keep watching whenever it starts back up? Mmm…probably not. We didn’t dislike this series, but ten episodes was about right for us. 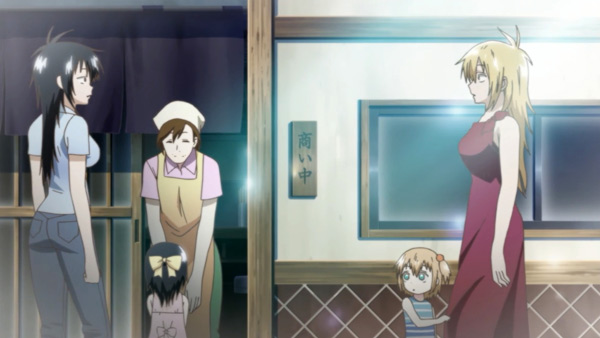 Berros escorts Braz to the Demon King Wolf-Daddy’s palace, where the king gives him three days to return the remnants of his agent Pantomime (Akim) to him. Braz escapes from Berros, but is chased by her superior, Chief Goyle. In Hydra, Bell and Staz meet up with Nell and Fuyumi. Fuyumi meets Bell and Nell’s mother Neyn, who tells her she was Fuyumi’s mom’s demon doppelganger. When they met, the two women were fused into one, making Fuyumi and Bell sisters.

At first Yanagi Fuyumi’s presence in the demon world seemed like a random occurrence, but considering it was Hydra family “technology” that got her there, and all the revelations we learned this week, it’s starting to look more and more like her coming was no accident at all. The concept of demons having human counterparts – be it Fuyumi’s mom and Neyn Hydra or Fuyumi’s dad and the Hydras’ butler – suddenly makes Bell and Fuyumi family, and gets Staz thinking that there’s probably more to his intrinsic interest in Fuyumi than just her human blood.

Speaking of family, Braz reveals that he isn’t just into creating super-monsters for his own enjoyment. He literally watched the current king kill his father, the previous king, and he’s never been cool with that. Everything he’s done has been to dethrone Wolf-Daddy and replace him with a new, “worthy” king. Thing is, it sounds like next week is the last episode, so we can’t see any way of Braz completing this task, on top of the Hydra family and Staz/Fuyumi and Staz/Bell situations shaking out. We’re assuming there’ll be a second season of this at some point; something we don’t have a problem with.