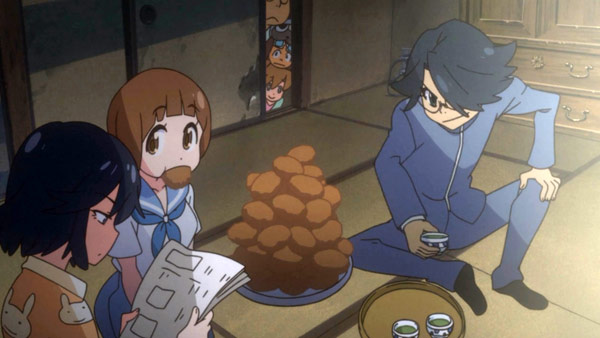 In the previous episode, things went too far for Ryuko. She allowed her rage consume her, and were it not for Mako, she’d probably be dead. So for much of this episode, she’s out of commission; skulking in the dark, refusing to put Senketsu back on not because she fears him, but because she fears herself while wearing him.

Satsuki is not so idle this week: she’s mobilized Honnouji for war against the Kansai academies, moving at breakneck speed with a laser-focus on her goals while Ryuko stands still, defeated and paralyzed. When a free-speech-loving former school newspaper editor gets beaten badly enough in front of her to stir her to action protecting the weak from the forces of oppression, it looks for a moment like she’s got her groove back. But even that proves to be a deception.

The show’s trend of having Ryuko falling victim to the machinations of others continues, with devastating results. Even with Satsuki paying a personal visit to her rainbow-haired mom Ragyo asking about Nui, we didn’t expect the newspaper guy to be Nui, and we certainly didn’t expect Ryuko’s rehab to be so quickly “cut” short by the destruction of Senketsu. By the time Satsuki collects the scraps for R&D and Mako is conscripted into Raid Trip service, Ryuko has hit rock bottom…which just means she has to stage an even more stunning comeback!

But while Satsuki sits high and mighty in her double-rotor helicopter, it’s clear she’s being played too. Her mother is obsessed with Kaizen and the notion 99% market share is a defeat; only 100% is victory. Satsuki is tool in Ragyo’s quest for world domination, and by letting Nui harass her, she’s hoping to witness the extent of a kamui’s power, so that they can harness and control it. Whether Satsuki is being the dutiful daughter or secretly vying for her mom’s throne top the World of Adults, it’s clear she won’t have to worry about Ryuko anytime soon.

After overhearing Riko, Maki’s behavior changes. She starts making clumsy mistakes and suspends love lab work. Riko tells herself she’ll tell Maki the truth tomorrow, and practices her confession to Sayo in a wig. That afternoon at cram school, a friend of Nagino’s tells Maki she’s naive for believing Riko said she was popular with the guys. Riko arrives and kicks him, then blames herself. Nagino bails her out by admitting he liked her. Maki runs home, and Nagi orders Riko to go after her.

At Maki’s house, Riko finally confesses that she’s also a beginner in love and lied to her. She says she’ll make amends by quitting the love lab, but doesn’t want to, nor does Maki want her too. Maki is sad and disappointed, but also relieved Riko wasn’t forcing herself to hang out with her, and even happy that she’s a beginner like her. At school, Riko confesses and apologizes to Suzu and Eno, and after everyone attacks her with huge slapsticks, the newspaper club enters with the first issue of the underground newspaper.

Love Lab probably wins the prize for least enticing title and premise: a school club devoted to affairs of the heart. And while it’s hit a few bumps here and there, on the whole it was a very nicely-animated exploration of how a small lie at the start of a friendship can grow into a major problem that threatens those bonds, but how a true friendship can endure such hardships, as long as its participants are honest and forthright in the end. Riko is both of these things, thanks in part to Sayo’s prodding (who says her over-thinking is keeping her from acting) and the fact things have gotten so awkward in the club. Minute for minute, this episode probably contained more drama than any previous Love Lab episode.

Even so, the show didn’t abandon its trademark bawdy slapstick comedy either. We get a nice balance of both, which keeps the drama from going melo. The random kid spilling the beans, was, well, random, but it gave Nagi the chance to shine, and also made it imperative that Riko confess. When she did, it was a surprisingly well-acted scene for both her and Maki. It turns the lie about her popularity wasn’t the foundation of any of her friendships, as she feared. The lie was just some of the grout, which can be mended. Maki, Suzu and even Sayo and Eno are friends with her because she’s a kind person who is ready to help others without a second thought. That’s probably why Nagi like(d) her too. 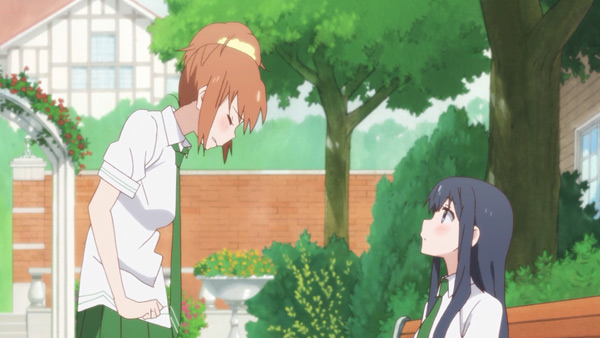 Momo and Nana expound on their scheme to turn love lab requests into fictional stories; the student council is excited about the idea. Riko still hasn’t told Maki the truth, and when Maki joins her cram school, Nagi almost tells her, and Yan does, but Maki doesn’t believe him. Riko continues to procrastinate, and is finally (almost) able to come out with the truth before a teacher drags her away for wearing a hair band. In the hall, Riko runs into her friend Mika, who knows she’s a love novice. Maki overhears them, but pretends she didn’t.

Those hoping Riko would finally come clean and face either Maki’s wrath or her forgiveness will have to wait one more week; the lie is going all the way down to the wire. As her cram school teacher can attest, Maki is very academically gifted, but we also thing she’s capable of putting two and two (and two) together: Yan’s blabbing about Riko not being popular; Riko’s half-confession after their run; Mika talking with Riko in the hall; all of it points to Riko lying about her romantic experience.Even if Riko wasn’t able to deliver a full confession, everything’s out there, and Maki has the wit to see it. But does she have the heart to?

What we mean is, Maki and Riko are good friends now, and she’s always going to give Riko the benefit of the doubt, and doesn’t want to consider the possibility that Riko has lied to her, even if that’s what all the evidence suggests. Her fondness for Riko, is preventing her from accepting that conclusion. It’s still up to Riko to once and for all tell her the truth and face the consequences. Unless – God forbid – a second season allows her to keep her lie going as a constant cloud over her friendships, Riko is out of time. To her credit, Riko did start her confession. Now she just needs to finish it.

When Riko hears that everyone calls her “Wild One” she starts emulating Maki, acting as cute and girly as possible. A member of the broadcasting club delivers two new questions to the council, asking if guys like “darker” or “chubbier” girls. The council suspects the questions were created by the newspaper association. They investigate and learn that a newspaper contest that only clubs can enter is coming up, so they want to be upgraded back to a full club.

When Riko and Maki confront Minami, planning to stall, she tells them she could publish love research in an underground newspaper, not asking for anything in return, confusing them. Sayori meets with her boyfriend after school, and Nana snaps a picture with which to blackmail her. A teacher catches them struggling in the hall and brings them to her office, where Sayo admits to having a boyfriend but denies the other council members know anything.

First of all, we were disappointed by the use of blackface in a (strangely isolated) 45-second sequence of an anime produced and taking place in the present day. Call it Japanese cultural differences if you must (though this definitely wasn’t ganguro – reference was made to a “soul sister”); if that crap ever appears again, we’ll be dropping the series on the spot; no third chances. For fuck’s sake, when we first heard “darker” girls; we thought they meant ganguro or even EMO girls; why didn’t they just riff on them, or another group not defined by race?

Those 45 seconds marred an otherwise good episode, in which the newspaper association (née club)’s apparent vendetta turns out to be more complicated than originally thought, and in which Mana threatens to expose Sayo’s illicit relationship and ends up actually exposing it, getting her into real trouble. Riko’s temporary turn as the comic (rather than the straght man as usual) was a hilarious change of pace, as was the increasing complex newspaper situation. Sayo also shows depth by not only accepting her estranged BF’s invitation, but by covering for her friends when she’s caught.