Well now, Anima certainly didn’t hang around long! But it was for the best, as Mendoza rips out his own ribcage and consumes the horror, gaining a shiny new body.

Leon can slice the body up all he wants (including, hilariously, slicing Mendoza’s face off to shut him up for at least a few moments), but he always comes back together, and always has a rejoinder such as “it is useless” at the ready.

Leon is missing something in this battle, because, in the beginning, he’s fighting alone. That ain’t gonna work against ol’ Mendoza; he of the giant light fists.

No; he’ll need to draw from the strength Mendoza denies himself, the true immortality humans are capable of achieving, even if it isn’t in the form of a literal everlasting corporeal form. Kinship, love, family, and cooperation will always prevail over Mendoza’s selfish designs. When he blithely discarded his only remaining family, Octavia, leaving himself alone in the world, he did himself no favors.

On the other hand, Leon is able to combine Garo and Zoro into a very cool hybrid suit of armor, imbued with the love and strength of his father, and placed in his hands by the teamwork of Alfie and Ema. Now Leon is no longer alone, so he won’t lose.

Mendoza also miscalculate’s Leon’s commitment to banishing him from the world, even he’ll be dragged down into Makai with him forever. Ema foils Leon’s suicidal plan by holding the portal open, and Mendoza tries to use this as proof that allies are worthless, since they’ll always have times when their opinions clash. Ema and Alfie would rather Leon not die.

Their desire for Leon to live on is shared by his own mother Anna, who is revealed as the source of the flames that have always burned within him. They were never a curse or a manifestation of his revenge, but a means of protecting him until he could stand on his own two feet as a knight and a good man. Now Anna’s flames will continually burn Mendoza for eternity, which is an apropos punishment for the man who would be immortal, and took so many lives and souls to achieve it.

Clearly, Mendoza didn’t consider all the angles of this immortality thing. His shiny new body was a dead end; flawed and unnatural. But the love, protection, and duty passed from generation to generation, from mother and father to son, between siblings, friends, or lovers, is both more righteous and more durable.

With that, mother and son part ways, and as Zoro’s horse bears Leon back home, a semi-spectral Herman rides alongside to tell him he’s a good son…aaand also to look out for that nice young lady Ximena. It’s a great cathartic moment when he emerges from the portal to the elation of Alfie and Ema. 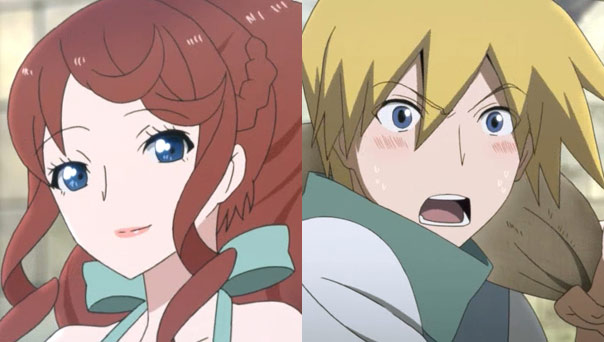 As the re-reconstruction of Santa Bard commences, we see that Prince Alfie is gonna be just fine. When the rebuilding is complete and he’s further along on being groomed for the throne, he’ll one day take a wife, and his son or daughter will inherit Gaia from him, along with the duty to protect.

What about Leon and Ema, found and comforted and supported each other in the shadow of the loss of their past true loves? Well, it’s kind of a Princess Mononoke end, in which they say not “goodbye” but “see you around” as they return to their respective lives, which feels right.

As for Ximena, she’s going to have a baby—gender to be determined, but let’s call it a girl, shall we?—and Leon’s duty now is to protect her and his incoming new sibling, who will inherit Garo and Zoro. Thanks to everything the child’s forbears have done for her sake, she won’t be born while her mother burns at the stake!

GARO was a very fun and entertaining show. A bit inconsistent at times, but it marched to the beat of its own drummer, took bold risks, and wasn’t afraid to fail. I can forgive when it did because it made such powerful impacts when it struck true. Its finale was one of those times. It looks like there will be a second season of GARO. I’ll definitely be tuning in.